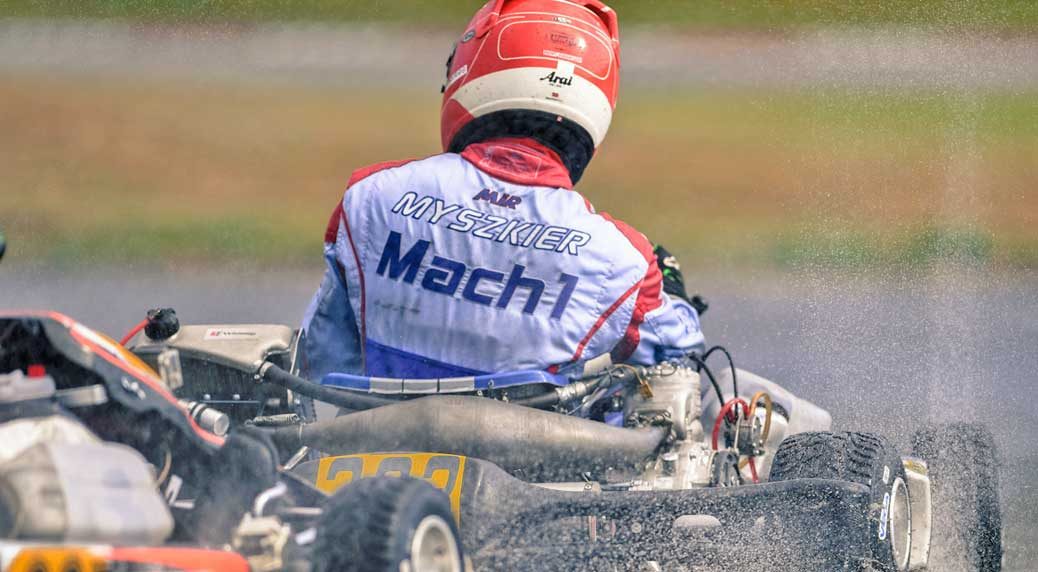 After a very successful kick-off to the German Kart Championship in Italian Lonato, Mach1 Motorsport travelled to the next event of the high class championship on German ground last weekend. In Bavarian Wackersdorf, the racing team of the traditional manufacturer started with six drivers against the international competition.

About four weeks after the kick-off to the German Kart Championship, the engines blared again in Wackersdorf (Upper Palatine) last weekend. More than 160 drivers from more than 25 nations gathered on one of the most modern kart tracks of Europe and showed thrilling races. After Daniel Stell’s kick-off victory in Italy, the team surrounding Martin Hetschel travelled on highly motivated and lived up to their expectations despite a little bit of bad racing luck.

At the seniors of the DKM, Tim Tröger gave it his all. Having fallen out prematurely due to an accident in Lonato, he didn’t waste any time in Wackersdorf. From the solid 24th place after qualifying, the Saxon floored it and improved his position continuously. 19th position on the interim rankings was followed by eleventh place at the first ranked race. At the second race, Tim was temporarily even on the great third place, but due to some quarrels came in 11th and just barely missed placing among the top ten.

David Liwinski unfortunately experienced a bad weekend in Wackersdorf. After a cautious qualifying a heat falling out followed, which finally cost the Dutchman the hoped for final qualification.

In the beginning it seemed to become a rollercoaster ride for Pawel Myszkier at the DMSB Shifterkart Cup. 13th place at qualifying was followed by an impressive third place at the first heat, which was then followed by a heavy setback due to a falling out during the second. Nonetheless, the Pole celebrated a strong comeback during the ranked races from midfield, prevailed against his opponents and finally came in on the great third place.

Marcel Schultheiß also held his ground among the strong field of participants. During the first race, the routine driver was in front of his team mate on ninth place. A time penalty during the second race threw the Mach1 driver back to 14th place though and erased all hopes of placing among the top ten again. Tim Schröder fought with some bad luck during the heats, but found his rhythm again during the races and ended up on 24th place at the second final race despite an engine defect.

Daniel Stell had his hands full at the shifterkarts of the DSKM again. The experienced driver proved his competitiveness during qualifying as well as the heats on the dry track, consequently drove at the front und finally started into the first final race from 9th place. There, Daniel ended up on 14th place due to a spoiler penalty, before new challenges awaited the routine driver during the second race. Similar to Lonato, heavy rain forced drivers and teams to choose their tires. In the end Stell chose slicks and was right with this again. At the end of the race he was the fastest driver of the field and fought for a place on the podium. A small collision and later time penalty threw him back to 16th place though.
“Of course we had hoped for a little more regarding the cup results this weekend.

Unfortunate situations on the track sadly threw our drivers back a bit – a lot more would have been possible with our speed. The rematch is going to follow at the half-time race in Ampfing – Pawel has shown where we want to go”, Martin Hetschel said ambitiously in the evening.
In three weeks the drivers are going to start at the half-time race of the DKM on the Schweppermannring in Ampfing.