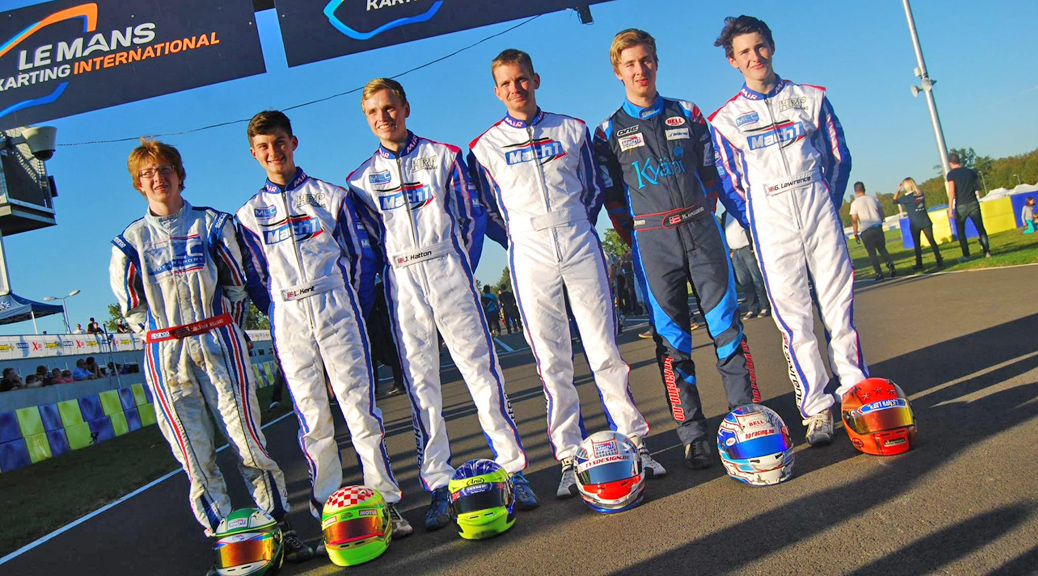 After the IAME X30 international final in Le Mans, pure joy prevailed for German chassis manufacturer Mach1 Kart. Shifterkart driver Thierry Delré dominated the final races and was announced X30 shifter winner in the evening. The other drivers were successful as well.

Mach1 Motorsport was present at the X30 international final in Le Mans (France) in cooperation with the English Mach1-importer MLC Motorsport. On the brand-new Alain Prost Circuit, the World-Championship titles of the juniors, seniors, masters and shifters were dealt out. The first free trainings already started on Wednesday. Qualifying took place on Thursday evening in flood light and rain. Numerous heats took place on Friday and Saturday, which held the decisions regarding the starting positions for the finals on Sunday.

Belgian Thierry Delré experienced a perfect racing weekend. He started into the events with a third place at qualifying and achieved two victories, a second and a fourth place during the following heats. He thereby achieved pole position on the overall list of rankings and had best chances of winning. In beaming sunshine, he showed two thrilling races. Despite strong pressure from his opponents, he kept the upper hand and achieved the overall victory. Team leader Martin Hetschel was really happy in the evening: “Wow, we’ve been working on our shifterkart concept for the last two years and are now celebrating big international success already. Thierry gets along great with the model and has driven superb races.”

The biggest competition waited at the X30 seniors. 99 drivers from more than 20 nations started there. Haavard Hallerud from Norway, Josh Hatton and Jonathan Williams from Great Britain started in a Mach1 kart. Josh Hatton showed the strongest performance. He fought with the adverse conditions during qualifying and therefore had to start into the heats from midfield respectively. He fought his way forward skillfully to eighth, eleventh and 15th places and drove top three times. Two fallings out threw him back further though and he was only able to start at the B finale. He was able to highlight his strength during this though and came in second twice. “With his times a lot would have been possible at the A finale”, knew Martin Hetschel.

Hatton’s fellow countryman Jonathan Williams celebrated his international racing premiere in Le Mans and became faster and faster with every race. In the end, he came in 15th at the C finale. Norwegian Haavard Hallerud had some bad luck in the meantime: Despite a good performance at the heats, a couple of accidents that weren’t his fault threw him back considerably and he only qualified for the C finale. He had set high goals for himself, but two engine defects caused him to forfeit prematurely.

Things were heated as usual at the juniors. Gus Lawrence always drove among the top ten during the free training and finished his qualifying on the good 24th place. He gainedmore positions during the turbulent heats and started into the A finale from 19th starting

position. He wasn’t able to fight with strong weapons during the finale though. Due to an engine problem he fell back to 27th place during the pre-finale. For the finale, the whole drive train and cable harness were changed and Gus was able to fight his way forward to fifteenth place.

His junior colleague Lewis Kent wasn’t able to find the right rhythm in the rain and was only on 49th place of qualifying. Due to a starting position in midfield, the heats didn’t go perfectly as well. He entered the B finale from the eighth place and finished it on the good sixth place.

Team leader Martin Hetschel was happy in the evening: “We can be very content with this weekend. The victory at the shifterkarts highlights our racing material’s qualities and is a great thank you for the whole crew – everyone has worked really hard. The other drivers perfectly with our material. The conditions couldn’t have been more diverse: rain, sun and cool temperatures. We’re now looking forward to the new year in good spirits.”