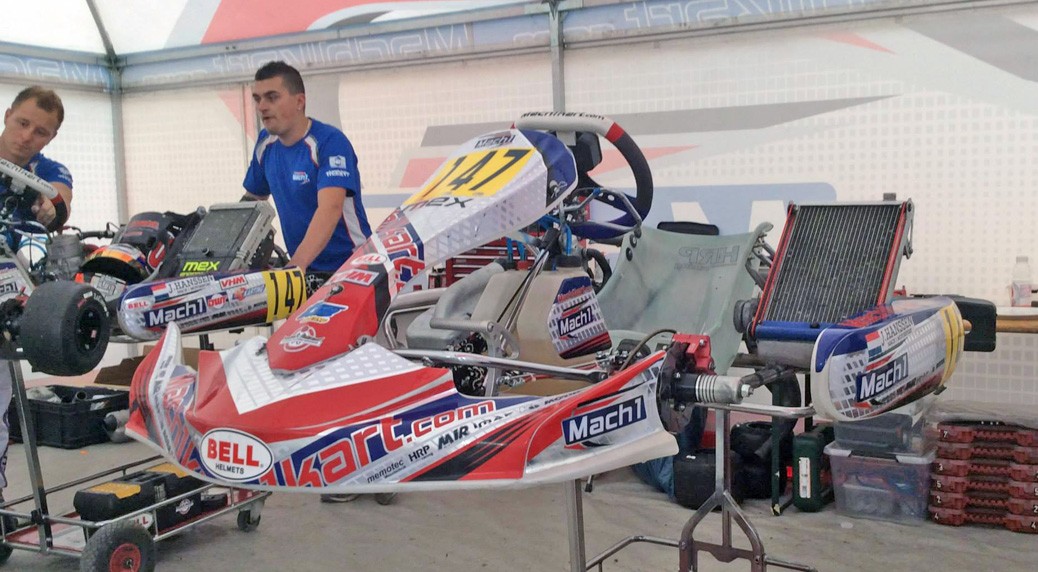 The German chassis manufacturer Mach1 kart started at the CIK-FIA KZ2 International Super Cup in Le Mans with three drivers. The trio showed an impressive performance despite partially difficult conditions and was able to hold their ground against the international competition. In the end, Joey Hanssen was on 16th place of almost 100 participants.

Only a few days after the German Shifterkart Championship in Oschersleben, Mach1 Motorsport started at the highlight of the year. The CIK-FIA KZ2 International Super Cup took place on the new kart racing track in Le Mans. The three drivers Thierry Delre, Pawel Myszkier and Joey Hanssen went up against the strong international competition.

Joey Hanssen was the best driver in the end. After a one-year racing break Hanssen was back this season and is participating in the Dutch Kart Championship for Mach1-importer B&S. He fulfilled one of his big dreams by participating in the World Championship and was able to completely impress everyone. He was already in the top group during the trainings but wasn’t able to tie in with this during qualifying. He only ended up on 56th position and was accordingly thoughtful on Friday evening: “The chassis felt good but we lost almost 5km/h maximum speed during the last free training and qualifying. Now we have to analyze what caused this.”

The heats on Saturday demanded a lot of drivers and materials. It was difficult to find the right setup due to the changing weather conditions. After the first heat the gear problems were taken care of and Joey continuously fought his way forward. In the evening he was on the same level as the leading drivers again and was on 34th position. During the pre-final on Sunday morning he improved his performance even more and came in on 10th place which allowed him to enter the big finale directly.

During the course of the 22 laps he steered clear of all quarrels and finished his appearance in Le Mans on 16th place.

Second driver of the team, Pawel Myszkier, showed a great performance once again. The Pole switched to the Mach1 Motorsport Team at the middle of the season and is getting along with the chassis really well. Due to the narrow timetable regarding the DKM he had no chance of testing the track in Le Mans before and to get used to the Le Cont tires which were new to him as well. He got faster from training to training though and was the best Mach1 driver after qualifying on 45th place.

He was unstoppable during the heats then. In the changing weather he ended up in the top ten three times and was on 17th overall position on Saturday evening. On the drying track he finished the pre-finale on the great 12th place and gained his ticket for the big finale. Unfortunately he wasn’t rewarded for his efforts during the final race though. Due to an engine defect he had to end the race prematurely and was visibly disappointed in the evening: “Despite the short preparation time I was able to drive among the top drivers in this top-class field. My Mach1 chassis has worked very well even with the changing weather conditions and I was confident to achieve a good result in the final race. In the end the engine stopped me, but that’s kart racing.”

Belgian Thierry Delre had good memories regarding the 1.384m long track. Last year he won the X30 International Finals on this track. Unfortunately things didn’t go according to plan this time and he had to travel back home on Saturday evening already. “The streak of bad luck didn’t end here either. A technical problem during qualifying destroyed all my chances once again. Additionally I just couldn’t find the right rhythm and unfortunately had to end the WM prematurely”, Thierry summed up.

Team leader Martin Hetschel was still in a good mood in the evening though: “I’m very content with this result. Despite the short preparation time due to the many racing events of the past weeks our drivers did outstanding jobs. I’m happy because even as a smaller manufacturer we don’t have to hide behind the top teams at the WM. The drivers seem to know this as well: We have a lot of requests for test drives and have produced considerably more chassis than in the previous years.”