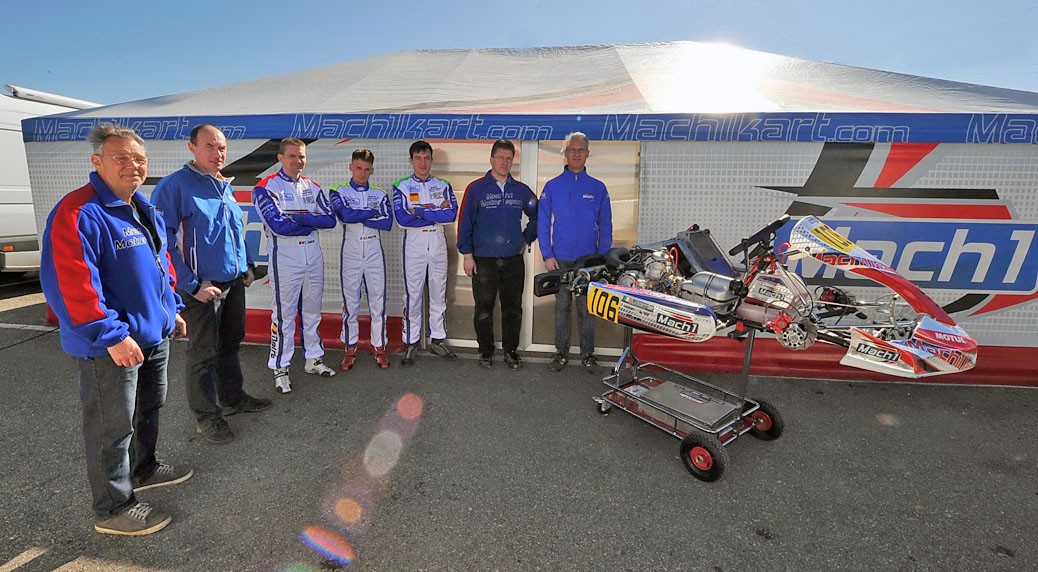 German chassis manufacturer Mach1-Kart travelled to the 26th Andrea Margutti Trophy in Lonato with four drivers and presented itself in top form. The new chassis FIA5 showed a strong performance and factory driver John Norris achieved the outstanding fourth place at the shifterkarts.

The race on the South Garda Circuit was the practical test for the new Mach1 chassis named FIA5. The German manufacturer faced up to the strong international competition for the first time and impressed all along the line. In sunshine and with high grip conditions, the FIA5 did a perfect job and just barely missed placing on the podium at the shifterkart class.

All in all, 53 drivers competed in the shifterkart class KZ2. John Norris, Thierry Delré and Toni Greif started for Mach1 Motorsport. Additionally, LS-Kart-driver Lucas Speck had his premiere at the shifterkarts. Despite the long winter break John Norris was able to show a strong performance during the free trainings already and secured tenth place at qualifying: “Unfortunately I didn’t have a free lap, otherwise even more would have been possible”, the Irishman explained afterwards. He showed his possibilities during the heats, qualified for the pre-finale on seventh place and was able to gain two more positions during this race. From the third starting row, John Norris achieved a perfect start into the big finale over 25 laps and kept close to the leading drivers throughout a race without any mistakes. At the finish line he just barely missed placing on the podium by coming in fourth. The mood was still good though: “Despite the high grip conditions we were able to find a good setup and were on eye-level with the leading drivers. I’m very content about the first use of the new chassis FIA5. I’d also like to thank Michael Blanken for the outstanding engines. All in all we’ve learned a lot and are now going to make use of these experiences.”

In the meantime, Belgian Thierry Delré experienced a bumpy start. Due to a defect of his race-truck he arrived late at the track at Lake Garda and entered the racing events with a considerable training deficit. Therefore he couldn’t get past 40th place during qualifying. He then gained more and more confidence during the heats though and got faster every time. He achieved entering the finals by coming in on 24th place and thereby highlighted his potential. He then got even further forward during the pre-finale. During this strong race he was able to gain seven positions and was on 15th starting position for the big finale. This ended for the young Belgian after only a couple of meters though. Due to a racing accident he had to involuntarily forfeit the race after just one lap. “Unfortunately not everything went perfectly this weekend. I’m now looking forward though and want to concentrate on the X30 EM in Castelletto. There I’m going to compete in the new supershifter class”, Delré said at the finish line.

After a longer break, German Toni Greif got into his kart again in Lonato and got faster and faster with every training. Unfortunately a falling out during the first heat threw him back considerably and he had to enter the repechage. For quite a while he was on the promising seventh position but he lost some ground towards the end of the race and missed the hoped-for finale. “I felt very comfortable in the new Mach1 FIA5 and can work with the new HRP-brake a lot better as well. It’s sad that it wasn’t enough to enter the finale this time because with my lap times I surely would have been able to drive among midfield”, the young Bad Mergentheim resident summed up.

Lucas Speck had his premiere at the shifterkarts. The Rhinelander started in an LS-kart which also comes from the ranks of Mach1 Motorsport and showed a steep learning curve. Speck got faster every lap and learned a lot. Unfortunately he narrowly missed entering the finale, but he was still content at the finish line: “This was very good for our first shifterkart commitment. The most important thing for us this weekend was to learn a lot during the races. The chassis reacted really well and controllable to changes in setup. I’m gaining more driving practice and security in a shifterkart with every lap. We’re going to work hard to develop further and we’ve now set the basis for this.”

The racing events are going to continue on the Easter weekend for Mach1-Kart. Thierry Delré is going to start at the X30 Challenge Europe in Castelletto (Italy). After his international finals-victory last year he is also among the favorites of the new supershifter-class there.