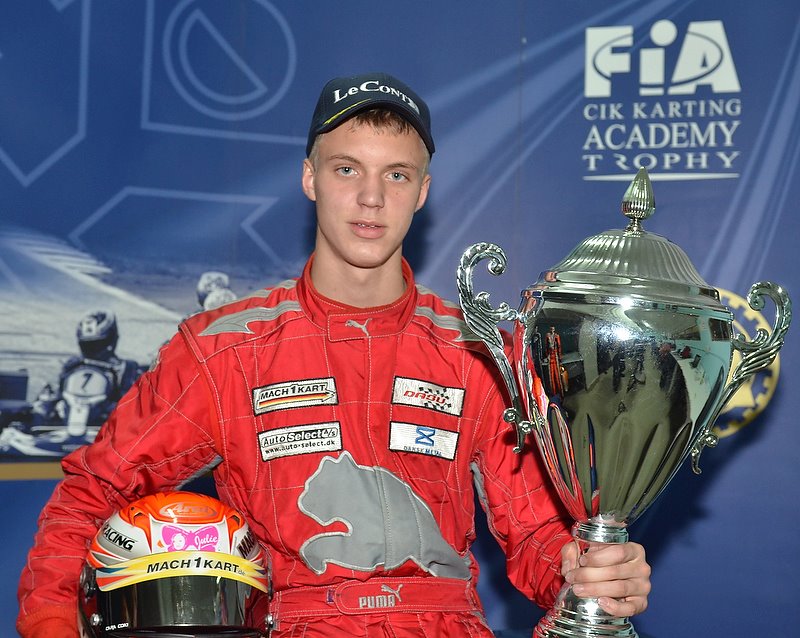 The Mach1 Kart factory team experienced a perfect season ending at the U18 world championship finale in Italian Sarno. The team proved their fighting spirit on the 1700m track and was finally rewarded by gaining the great 2nd place.

Three of their drivers started on the challenging race course inItaly: Danes Martin Mortensen and Yannick Flygenring as well as the only German, Lukas Speck. The weather provided additional suspense. Heavy rain and tornado-like gusts of wind demanded a great deal of the participants on Sunday morning.

Martin Mortensen was the most successful driver, even though it was not clear whether or not he would start at all for quite a while. During free training on Friday, the youngster had a bad accident and was only cleared for starting by the race physician after warm up on Saturday morning. With a newly built Mach1-chassis he gathered momentum again right from the start and placed 24th during qualifying. He managed to validate his great performance during the Heats. He did the best performance possible on Saturday, by twice coming in 9th and once coming in 4th. He then suffered a minor setback on Sunday. Martin lost his rear axle’s ID-tag and his performance was not counted during the last run. Despite this flop he still managed to move to the finale on the 30th position in the end.

He did everything right during the pre-finals then. From 30th starting position, he fought his way through the top-class field and was able to land on 15th position. He managed to up the ante during the second pre-finale. This time the starting order was reversed and after starting from 5th position, he gained two more positions and after adding up the points, he ended up on the overall 7th place. During the finale, there was no holding back anymore. Martin went all the way and left one opponent after the other behind him. After 18 laps he crossed the finish line on the sensational 2nd place and revealed that maybe more would have been possible: “I’m very happy, the chassis worked perfectly and I was able to drive great times. If the race had gone on a couple of more laps, victory would have been possible.”

His teammates on the other hand had some bad luck. Qualifying did not go very well for Flygenring and he was not able to live up to his last weekends’ performances during the Heats as well. Always placing in midfield, the Dane was not able to enter the finals and was only allowed to race in the B-finale, during which he showed his skills and tried to fight his way forward with a number of duels. In the end he contentedly came in 11th.

The only German in the field, Lukas Speck, struggled with the performance of his power engine for quite some time. After a disappointing 21st place at qualifying and 10th and 17th places during the first Heats, the CIK-FIA responsible persons showed consideration. Lukas received a new engine and promptly came in 5th, landing in the top group. Thus he started on Sunday respectively hopeful. However, due to the heavy rain during the last Heat he was the victim of a collision and missed entrance to the big finale for the first time this year. Unfortunately, the mixed course of the weekend continued during the B-finale. Starting from 3rd position he had to forfeit the race after the first lap. The kart was uncontrollable due to the effects of the collision.

Despite Speck’s and Flygenring’s disappointments, the happiness about placing on the podium prevailed for team leader Martin Hetschel in the evening: “It was an incredible weekend with lots of ups and downs. Yannick and Lukas unfortunately had some bad luck and things did not go too well for Martin in the beginning either. But we never gave up and were able to prove the possibilities of our chassis through the final result. I want to say a huge thank you to the entire team for their great work throughout the year.”

Mach1 Motorsport junior Randy Berglas did a good job as well. The reigning Swiss Rotax Junior Champion started at the Academy Trophy and kept up with the frontrunners during the finale, coming in 8th. After this outstanding result, the young Swiss has now set himself big goals for 2012: “I’m happy about the season closure and am looking forward to next year. I will then start in the U18 world championship with Mach1 and am very optimistic regarding my chances with this great chassis.”