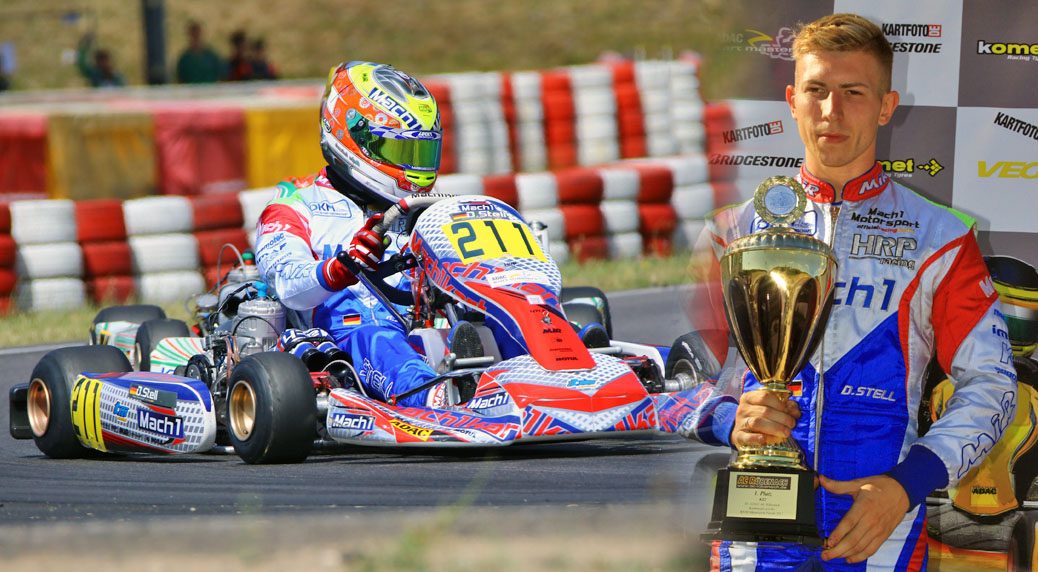 Mach1 Motorsport just experienced an eventful weekend. The racing division of the German chassis manufacturer started at the second event of the ADAC Kart Masters with five drivers and experienced an exciting event. In the end, Daniel Stell caused a lot of joy due to a double victory at the shifterkarts.

Last weekend Mach1 Motorsport wanted to attack. The team surrounding Martin Hetschel travelled to the Prokart Raceland with five drivers. All in all, 166 drivers started at one of the most modern kart racing tracks of Europe to give it their all at the ranked races three and four in beaming sunshine and midsummery temperatures.

The youngest drivers started at the Bambini class. Mach1-protégé Sondre Norheim started there as well. The Norwegian drove among midfield despite the considerably less experience he had on the track compared to most of his opponents and started into the first ranked race from 20th position. He then lost some positions during the race, but was able to fight his way forward to 19th place during the second race and thereby achieved entering the top 20.

Also from Norway, Harvard Hallerud started at the X30 seniors. After a successful Wackersdorf-debut last year with fifth place at the finale, things didn’t go according to plan for the Scandinavian this time. After the heats Harvard was on 18th place of the interim rankings. Among the strongly contested midfield he was involved in a collision though and had to end the race prematurely. From the back of the field he then was able to show his possibilities during the second race and caught up to the top ten. Unfortunately a 5-seconds-penalty threw him back to 18th place in the end.

Marcel Weber started at the OK seniors as a soloist and had to deal with engine problems throughout the entire weekend. From 23rd place at qualifying the rookie then improved to 17th starting position for the final races. But he wasn’t able to get further than 24th and 21st places in the end.

Daniel Stell and Julian Müller started at the shifterkarts. Daniel showed a perfect performance at his guest appearance at the ADAC Kart Masters. The Hammelburg resident already did a great job during qualifying and led the list of rankings. The routine driver then secured pole position for the first ranked race by achieving first and second places at the heats. Daniel did great there too, entered the race with a perfect start and celebrated a grand start-finish- victory in the end. At the second race things went similarly: Daniel won again.

Julian Müller started into a horrible weekend initially. Two fallings out during the heats threw the ambitious driver to the end of the interim rankings. He wasn’t intimidated by this though. Julian showed his talent during the ranked races and drove two impressive races. The first catching-up race ended with the crossing of the finish line on ninth place. At the second race, he just barely missed placing among the cup ranks by coming in seventh.

In the evening Martin Hetschel praised his drivers’ performances: “I think nothing can be added to Daniel’s performance. He was excellent throughout the entire weekend and highlighted our potential. Julian would have been a top five driver without the problems on Saturday as well. Our two Norwegians were able to gather lots of racing experiences again. Marcel unfortunately had some bad luck. We fought with his engine’s performance from the beginning.”

Mach1-karts are going to start in Wackersdorf again next weekend. The second race of the Rotax Max Challenge Germany is going to take place then. The factory team is going to continue things at the German Kart Championship in three weeks. 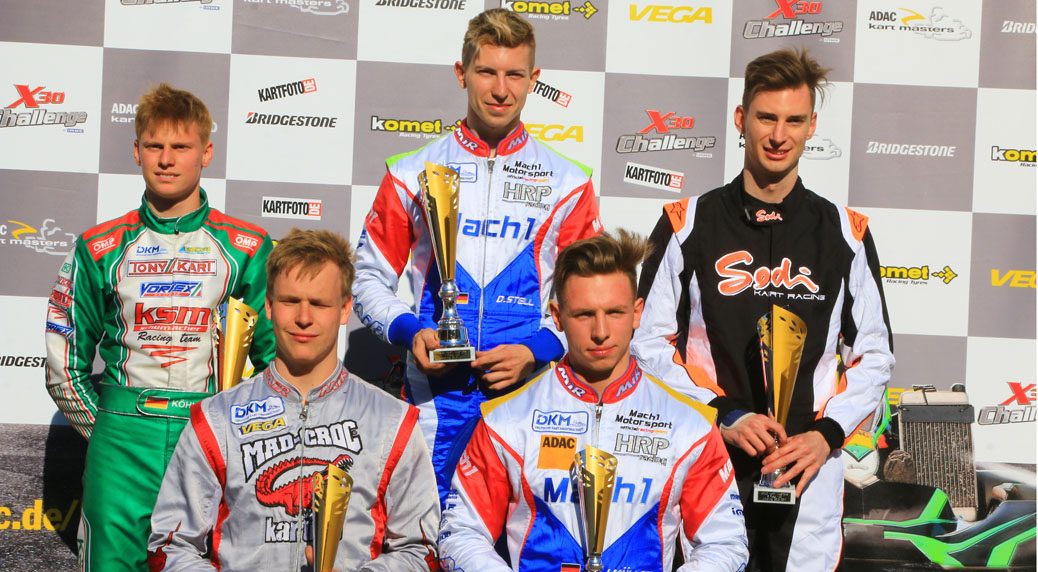 The Mach1 Motorsport team celebrated a successful ADAC Kart Masters kick-off. The German chassis manufacturer’s team started with five drivers in Ampfing last weekend and was able to impress throughout the event. The Mach1 drivers especially highlighted their potential at the shifterkarts – Daniel Stell was among the fastest drivers and secured a race victory in the top-class category.

Things got serious for 165 drivers on the last weekend of April in Bavarian Ampfing. The ADAC Kart Masters invited everyone to the season kick-off on the challenging Schweppermannring and spectacularly started into its tenth year. After frosty temperatures and snow at the beginning of the event, the weather gods meant well on the racing day. Best spring weather made for optimal conditions and thrilling kart racing action.

As the youngest of the team, Sondre Norheim started at the Bambini class. The Norwegian initially didn’t find the right rhythm fast enough and only came in 24th at qualifying. Despite a falling out during one of the heats, the youngster was on the 21st place in the interim standings and from there was able to drive forward to 16th position during the second final race.

David Liwinski showed a solid performance at the X30 seniors. After 13th place at qualifying, the Mach1 protégé established himself in midfield and finally came in 13th and 15th at the final races respectively.

Things went especially well at the shifterkarts. The Mach1 Motorsport team sent an experienced driver, Daniel Stell, into the race and celebrated a great deuce. From second starting position, he won both heats and was therefore on first place in the interim standings. During the second race, the Hammelburg resident came in 2nd with the best time of the race and then increased his performance even more. During the second race, Daniel gave it his all, took the lead and came in as the beaming winner in the end.

Julian Müller was also able to impress with a good shifterkart performance. The Cologne resident was among the top ten of the strongly manned field throughout the entire weekend and went into the first race from seventh place. There Julian was able to confidently defend his position and even improved his performance subsequently. Coming in 4th, he ended up among the cup ranks at the second ranked race and therefore made for a double Mach1-achievement among the top five.

Marcel Schultheiß also started at the KZ2. From 15th position the Mach1 driver started into the first race, but then had to deal with a major setback after a falling out. Marcel then obliviously drove full-speed in the following race and highlighted his potential with a catching-up race from the end of the field to 13th place.

Team leader Martin Hetschel praised his protégés’ performances: “We were able to be on point today. Our shifterkart-performance was really good and already gave a foretaste of next weekend. Then we want to drive at the front again at the DKM.”