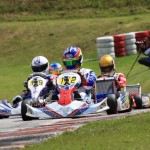 As the first huge international exchange of blows of this season, the race of the CIK-FIA Kart European Championship at the Prokart Raceland Wackersdorf awaited Mach1 Motorsport. Despite difficult weather conditions, the German manufacturer held its ground greatly and collected valuable Championship points.

The past weeks have been exhausting for the Chassis manufacturer from Brackenheim. As many as three huge series awaited the team, including the DKM, DMV Kart Championship and the ADAC Kart Masters. But they showed no signs of tiredness. Strengthened by the numerous successes of this season, the team started confidently into the first round of the CIK-FIA KF2 European Championship in Wackersdorf, sending in John Norris, Lucas Speck and Lisa-Christin Brunner.

During free trainings the trio already showed brilliant performances, causing team leader Martin Hetschel to be optimistic: “We’re fighting against the best kart drivers and teams in all of Europe. Lucas and John have made first impressive points due to very good times. It’s still a long way to go until the finals though.”

It became obvious during qualifying that not only the competition but also the weather would pose a huge challenge this weekend. Light rain got the four qualifying groups all mixed up. In the end, Lucas Speck established himself on 21st position, Norris followed on 30th and Lisa-Christin Brunner came in 82nd. In the following six Heats everything went haywire. With as many as five top-ten placements, including a second place and two fastest laps, John Norris pulled through the Heats best. Only due to a falling out did he slide back to the 21st starting position. At the finals on Sunday the sun had disappeared entirely and the first race had to start on the wet track. Norris adjusted himself to the slippery conditions quickly and established himself in midfield of the international field. At the finish line, he had gained five positions and came in 16th. The Irishman caused a furor during the second race in the afternoon. On the drying track, he fought his way up to fifth place during the first laps and kept close to the front. A technical difficulty slowed him down during the 21 laps though. John tried keeping his pursuers behind him but lost a couple of positions and came in 11th. The disappointment regarding this missed opportunity was obvious when talking to Martin Hetschel in the evening: “John was on a very good route. The times were right and we could have landed a place on the podium with an ounce of luck. Unfortunately we can’t control everything in the end.”

Misadventurer of the weekend was Lucas Speck though. Just like Norris, he held his ground in the Heats very well and even led one of them over a considerable period of time, but in the end he had to deal with two fallings out and missed the finals by only one position. As a consolation, he started into the B-final from pole position and highlighted his performance of the weekend. On the wet track he finished on second position, making him the best-placed German driver.

The third driver of the team, Lisa-Christin Brunner, developed considerably during the Heats and was able to show her talent from time to time. Still, it was difficult for her to fight her way forward and she had to prematurely drop out on Saturday evening. “Lucas would have deserved to be in the finals; he showed a really great performance and currently belongs to the fastest KF2 drivers in Germany. Lisa is constantly improving as well, but it was difficult for her to gain ground due to her little international experience,” Martin Hetschel strengthened his young drivers.

Toni Greif faced up to the international shifter kart elite as a soloist in the KZ2 European Championship. After gaining 79th position during qualifying, he managed to show great catching up races during two Heats, coming in 9th and 11th respectively. Unfortunately, he also had to involuntarily stop twice and additionally fell back due to collisions, causing him to miss reaching the finals. Even though the final result was sobering, Martin Hetschel was happy about the performance in the KZ2: “Toni is a great driver to further the development of our shifter kart chassis. We’re learning new facts every weekend. Unfortunately, luck was not on our side this time.”

The next race already awaits the team next weekend: it will be the third race of the German Kart Championship in Bavarian Ampfing.