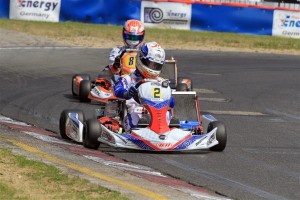 With John Norris, Mach1 Kart still belongs to the top field after the halftime-race of the German Kart Championship in Kerpen. The first league of German kart racing stopped at the Erftlandring in Kerpen. On the overall list of rankings, the team is currently on second place.

The kart manufacturer from Brackenheim travelled to the third race of the German Kart Championship in Kerpen filled with ambition. Under gleaming sunshine, the 1.107m long track showed its best aspects and attracted lots of spectators on both days. John Norris is still playing an important role in the fight for the German Championship title. The factory driver from Ireland started into the racing weekend strongly by achieving third place during qualifying and managed to defend this position during the Heats as well. He was able to increase his performance even more during the first final. John put a lot of pressure on the leading driver and temporarily even overtook him. His performance got a little weaker during the second half of the race though and he had his hands full defending his second place. He was completely confident prior to the second race though: “We have changed something about the kart, a victory should now be possible.” Unfortunately the changes of the setup proved to be a disadvantage. John lost a lot of ground and fell back to eighth place. During the 23 laps he managed to adapt to the new specifications, but more than fifth position wasn’t possible anymore. “Actually, the result should be different. We’re still content though. John is on second place four races before the end of the season and belongs to the serious favorites for winning the title”, Marten Hetschel commented on the events. 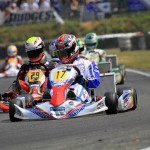 Next to the Irishman, Marco Forrer and Julian Müller started in the top class as well. Weakened by the flu, Swiss Forrer wasn’t able to fully attack though and had to end the weekend prematurely. Julian Müller showed a solid performance in the meantime. At his first start in the DKM, he drove in midfield and continually shortened his backlog to the leading drivers. Unfortunately a falling out during the second final caused a minor setback.

“Julian has greatly improved his performance during the last few days. Driving on 16th position among such a strong field is very good. Marco didn’t stand a chance on the other hand; his illness prevented him from it. In the end, he was too weak to drive another race”, Hetschel analyzed the events. 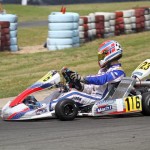 Junior Nicolai Hagenaes was followed by bad luck as well. Technical problems and collisions during the races caused two fallings out and a bad mood for the Norwegian. “We all know the performance Nicolai is capable of. Unfortunately Kerpen just isn’t his track”, Hetschel tried to build up his protégé.

The team will be travelling to the next highlight in only a couple of days. The finale of the CIK-FIA KF2 & KF3 European Kart Championship will be taking place in Italian Ortona. John Norris and Nicolai Hagenaes will start for Mach1.