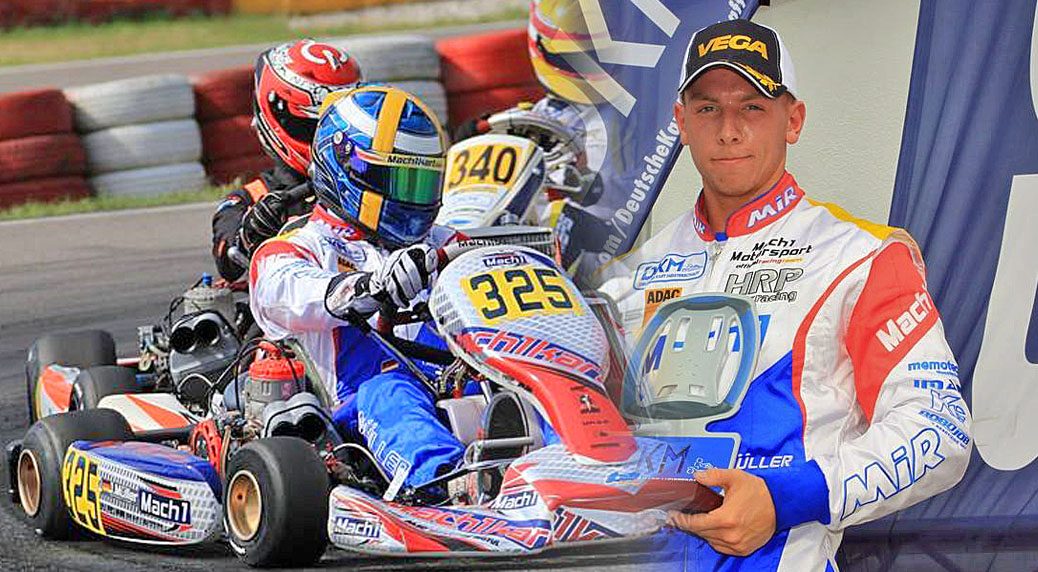 The attention of the international kart racing scene was on the half-time race of the German Kart Championship in Wackersdorf last weekend. The factory team of German chassis manufacturer Mach1 travelled to the Prokart Raceland with eight drivers. They caused quite a stir especially at the shifterkart championship, but weren’t able to gain equivalent results in the end due to unlucky situations on the track in Germany’s highest kart racing series.

The second weekend of July was a guarantee for high-class kart racing in Bavarian Wackersdorf. 160 drivers competed against each other on the 1.190m long track in Upper-Palatine. The racing division of the German kart manufacturer Mach1 started in three different categories and was able to hold their ground even with high grip conditions and midsummery temperatures.

Four drivers started in the senior category. David Liwinski started off as the best Mach1-protégé at the German Kart Championship in the beginning. After 18th place at qualifying the Dutchman moved forward to 12th starting position for the first final race after good heats. During this the youngster lost some positions due to quarrels though and fell back to 17th place. A falling out during the second race erased all hopes of a further catching-up race afterwards.

Cameron Boedler showed a solid performance. After 23rd place at qualifying he came in on the good 15th places at the crucial ranked races and thereby collected championship points in both races. Team mate Luka Wlömer also showed his potential due to a good catching-up race. From 28th position at qualifying the Berlin resident drove forward to 17th place.

En Qi Wang presented himself greatly. The young driver from China celebrated a great premiere at his first ever OK race and directly qualified for the final races. In the end he had to end both races prematurely due to accidents though.

Daniel Stell already entered an ambitious direction during qualifying of the German Shifterkart Championship by gaining ninth place. A falling out during a heat threw the routine driver back to 22nd place on the interim rankings though. The ADAC Kart Masters champion of the 2015 season had less luck during the races as well. Accidents prevented the shifterkart driver from showing his true potential. In the end he still achieved a good 16th place at the second race despite a time penalty.

Marcel Schultheiß had to deal with bigger disappointments. Two fallings out at the qualification races threw the Mach1 Motorsport-protégé back to the end of the field and prevented him from entering the final races.

Julian Müller showed his usual top form at the DMSB Shifterkart Cup. After two second places in the heats the Cologne resident drove among the front field during the first race as well and came in fourth. During the second race his way to the cup ended prematurely though. During the fight for third place Julian unfortunately had to park his kart in the off due to an accident.

Tim Schröder gave everything at the DSKC as well. The Northerner showed a good performance by coming in 19th and 14th respectively and proved his competitiveness.

“The conditions were really extreme today. The track conditions were really challenging due to the high grip. Our performance was right though – unfortunately there was a lot of additional bad luck during the races, otherwise Daniel and Julian would have been able to drive among the forefront too. Now we have to look forward positively. We can already do better next weekend at the ADAC Kart Masters in Kerpen”, team leader Martin Hetschel said in the evening.