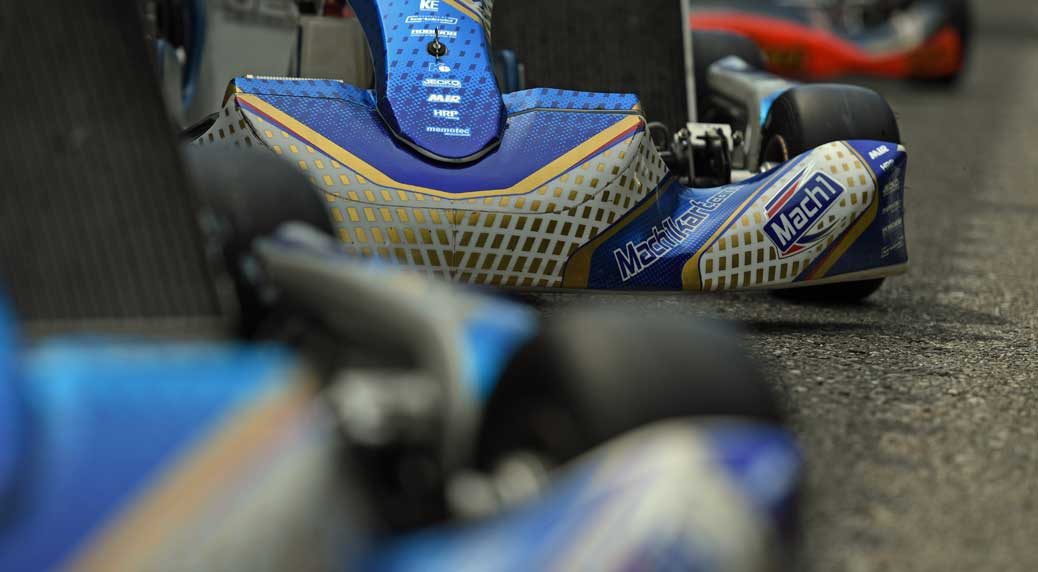 Last weekend, the half-time race of the German Kart Championship was in the focus of German chassis manufacturer Mach1. The team traveled to Bavarian Ampfing with six drivers and drove among the front fields of the ranked races five and six. Daniel Stell especially played to the gallery and ended up in the cup ranks of the DSKM.

The renowned racing series welcomed 165 drivers from all over the world on the 1.063m long Schweppermanring south-east of Munich for the season half-time of the German Kart Champion-ship. Midsummer temperatures turned the event into a small challenge for the drivers, teams and spectators. Mach1 Motorsport passed it with flying colors though.

David Liwinski started for Mach1 at the seniors of the DKM. Two weeks before the European Championship on the same track, the youngster had his hands especially full – several drivers used the opportunity as a last rehearsal. The Dutchman wasn’t unsettled by this though and started into the first final race from 12th place after qualifying and successful heats. There, David just barely missed achieving a cup by coming in sixth. At the second race, he was only ranked 15th due to a spoiler penalty.

Tim Tröger unfortunately stayed behind his usual performance a little. Nonetheless, he fought his way forward from 26th place at qualifying to 17th place at the first ranked race. Unfortunately, the Plauen resident then had a falling out during the second race.

At the DSKC, Pawel Myszkier was really fast. After 11th place at qualifying, the Pole had a lot of bad luck though. After third place at the first heat, a falling out followed which resulted in 18th place on the interim rankings. He then achieved the same position at the first final race. His catching-up race during the second run ended with an involuntary falling out though.

Marcel Schultheiß and Tim Schröder presented themselves well after initial strains. Tim fought with technical problems during qualifying and thereby found himself at the end of the field. The driver from Lower Saxony subsequently showed a determined upwards trend and ended up on 21st place. Marcel had a double falling out during the heats, but showed his true fighting spirit then and finally even ended up on 16th position.

Daniel Stell started at the German Shifterkart Championship as the big hope. The Mach1 driver promptly presented himself on a level playing field with his international competition by coming in fourth at qualifying. He confidently defended his position during the heats as well, drove the best lap time and finally started into the first final race from the second starting row. Daniel was temporarily thrown back to midfield due to quarrels though, but drove forward to ninth place again and therefore ended up among the top ten. At the second final race, the Mach1 protege highlight-ed his potential once more and ended up among the cup ranks on fifth place.

Team leader Martin Hetschel looked back on the events with mixed emotions in the evening: “The conditions of this weekend didn’t make things easy for us. After confident trainings and fast laps we had expected a little more in the end. Our pace would have been enough to achieve places on the podium at the OK as well as the KZ – but that’s racing. Two more events are still up ahead. Daniel still has all possibilities on fifth place.”

The team is going to continue in three weeks at the ADAC Kart Masters in Oschersleben. The national racing series of the second biggest automobile club in the world is also going to herald its season half-time then.