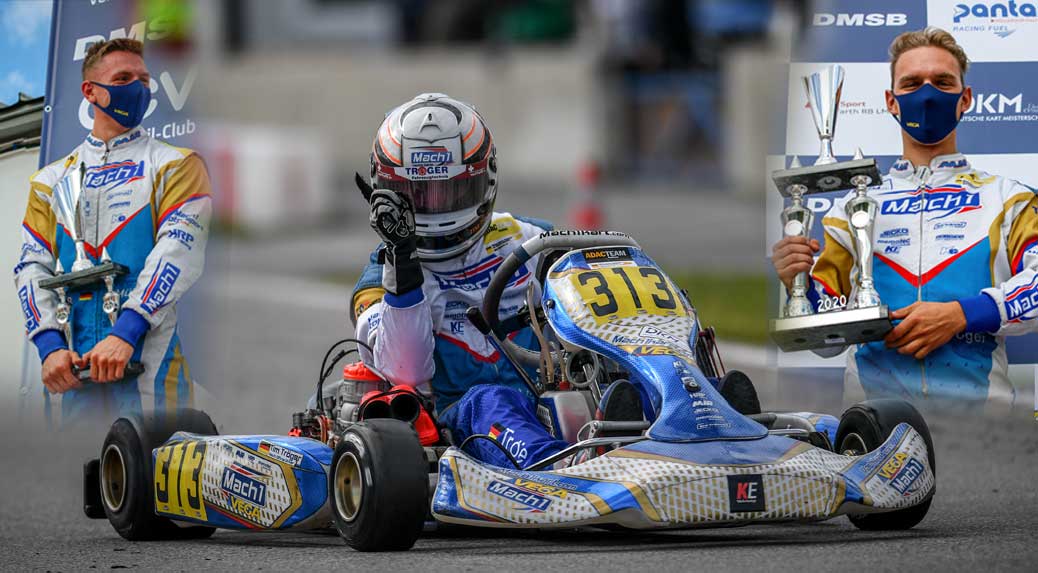 To the start of the second half of the German Kart Championship, Mach1 Motorsport went to Wackersdorf in Bavaria. The highest German karting award was guest at the Prokart Raceland for races five and six, in which the racing team of the traditional manufacturer sent a total of seven fosterlings on the journey. In exciting races, the Mach1 players delivered a brilliant performance. Tim Tröger and Julian Müller held their place at the top of the DMSB Shifter Kart Cup and provide a Mach1 Motorsport double lead.

In the past few weeks, there was one race right after another for Mach1 Motorsport. After recent successful events within the framework of the DKM and the ADAC Kart Masters with various race victories and top positions, a big challenge awaited the team around Martin Hetschel last weekend. The third event of the German Kart Championship in Wackersdorf provided plenty of work inside the team tent with partly difficult weather conditions and required drivers and equipment.

In the juniors, Tom Kalender was highly motivated after good races in the recent past. In Wackersdorf, however, the youngster struggled at the beginning of the weekend with the conditions on the 1,197 meter long course. In the races, the young racer did not find his rhythm fast enough and only finished 23rd in the first race, before a failure in the second round led to an early end.

In the German Kart Championship, Niels Tröger could not keep up his usual performance in the beginning of the weekend as he was placed 18th in qualifying. After the preliminary races, the Mach1 driver was already in ninth place, but then had to register a failure in the first race. From the end of the field, however, Niels gave full throttle again and drove up to tenth place and made it into the point rankings.

In the DMSB Shifter Kart Cup, Tim Tröger was part of the measure of things this weekend. In qualifying and heats, the shifter kart rookie asserted himself being placed in second position each time and underlined his ambitions. In the pre-final Tim seamlessly followed up with his performance and saw the checkered flag as a great second again. In the final round, the Mach1 fosterling relented and drove with race best time to a brilliant victory. Team-mate Julian Müller missed out on a flawless lap in qualifying and finished 21st in the chasing field. In the individual races, however, the old hand returned to his old strength and in the end only narrowly missed the podium being placed fourth.

Paul Voegeding also made a strong comeback in Wackersdorf at the beginning of the event and improved from 19th place in qualifying to ninth place in the prefinals. Paul also underlined his possibilities in the final race and after 21 laps of race distance he secured himself a place in the top ten of the high-caliber classification being placed ninth. Tobias Sjögren also played to the gallery being placed 24th in the intermediate ranking and finished his pre-final as a good sixth. In the final, the Swede fought for positions in the front midfield, but eventually fell back to 15th position after a spoiler penalty.

For the first time Rouven Wilk competed for Mach1 Motorsport in the DSKC. Over the weekend, the youngster gained important racing experience and even made the jump to the top 20 in the final being ranked 19th.

Martin Hetschel found positive words for the performance of his fosterlings in Wackersdorf: “My boys showed a great performance today. In the DSKC we were again the measure of things and are now with two riders at the top. For the final in Oschersleben, it is now important to make every effort to place the crown in our ranks for good.”

In just under two weeks, Mach1 Motorsport will head to the next race event. Then the third race of the ADAC Kart Masters takes place in Ampfing, Bavaria. Only one week later, the DKM decisions are made at the Motorsport Arena Oschersleben.