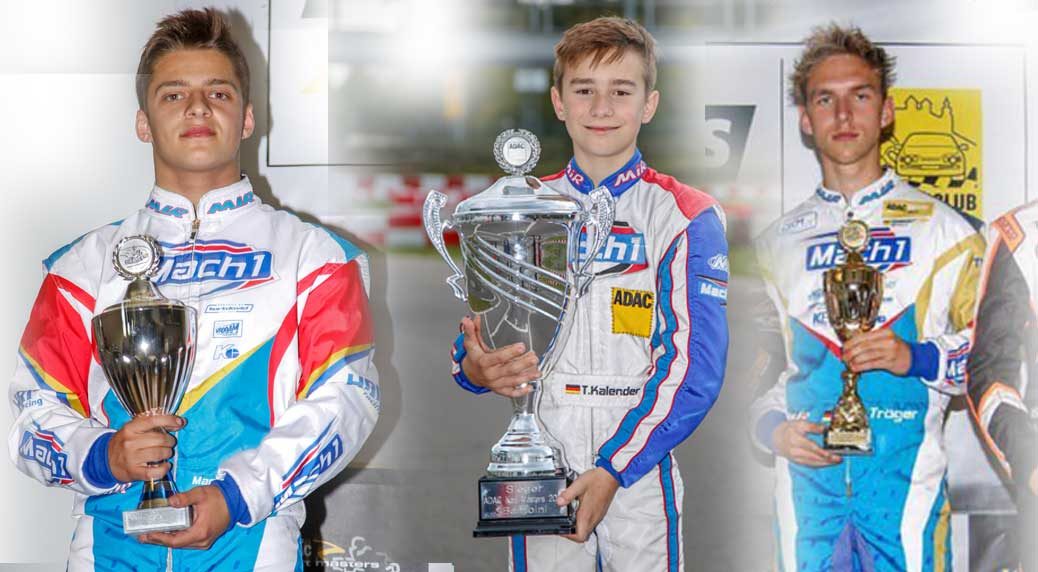 Successful final of the ADAC Kart Masters in Wackersdorf

The last races of the ADAC Kart Masters started last weekend in the Prokart Raceland Wackersdorf. 156 participants took part in the race and fought another thrilling fight at the end. Also, with some Mach1-kart-drivers started and caused a lot of cheers.

At the end of the national kart race series of the ADAC, the fields in the classes were once again top-class and the spectators in the Prokart Raceland Wackersdorf got to see great karting. This was also ensured by the Mach1-kart-pilots. Especially in the Bambini class it was close as always. In part, a group of ten fought for victory. The three fosterlings of the Mach1 supported team DS Kartsport achieved great successes. Tom Kalender finished the year as champion of the Bambini class and again collected leadership kilometers in Wackersdorf. The same was true for his team-mates Luca Schwab and Ben Godenau. In the end, Schwab won the last race of the year.

At the OK Juniors, Linus Hensen from Team Kartschmie.de celebrated his premiere in the ADAC Kart Masters and caused a sensation in the competition. The youngster drove with his Mach1-kart throughout in the top field and finished the final being placed third and fifth in the cup rankings.

The same was true of Niels Tröger. After his victory in the ADAC Kart Cup a few weeks ago, he was now fighting for a top ranking in the overall classification of the ADAC Kart Masters. He quickly got used to the, for him new, Mach1-kart and finished second in Sunday’s final. In the championship it was enough to finish in fourth place.

Three riders faced the competition in the X30 seniors and after the first final on Sunday the mood was excellent. Erik Müller finished tenth, while the two fosterlings of DS Kartsport Alexander Heil and Lion Düker finished ninth and 12th. Dücker defended his twelfth place in the second race, but his two teammates had to cope with a failure.

In the manual kart class KZ2 Tim Tröger used the race to prepare for the DSKC in Ampfing next weekend. The Saxon driver prevailed strongly against his opponents and finished third in the first race with the fastest lap. Due to a poor start, he fell behind at the start of the second final but worked his way back to ninth place. Manual kart rookie Mika Nelles from DS Kartsport also impressed with a 13th and 16th place, landing twice in the points standings.

Mach1-kart-owner Martin Hetschel was very pleased with the results of his brand: “You can only be satisfied with the results. We have been successful in all classes, whether Bambini, X30, OK or manual kart, underlining the good performance of our chassis. I congratulate everyone on their success and thank them for their trust in our product.”

The final of the German Kart Championship in Ampfing will continue in just a few days. Mach1-kart-drivers will be back at the start and will fight for the remaining championship points.