During the past weeks, Mach1 drivers started at lots of different races across Germany and Europe and achieved remarkable results.

Nicolai Hagenaes and John Norris got things started at the second event of the WSK Euro Series in Spanish Zuera. In gleaming sunshine, Norwegian Hagenaes drove his best race of the year so far. After a flat during qualifying, due to high commitment he managed to achieve entering the final race of the strongest European racing series during the Heats. During the finale, he once again participated in exciting duels and in the end finished on 27th place. Team leader Martin Hetschel was accordingly content afterwards: “To finish among the best 34 is already a strong achievement in this field. Nico is increasing his performance from race to race and I’m already very excited about the further development of the season.”

John Norris was less lucky. The fast Irishman gained a good starting position by coming in 21st during qualifying. Everything came at him thick and fast during the Heats though. Despite great lap times, technical difficulties slowed him down again and again, causing him to miss entering the finals for the first time this season. “It’s really disappointing. Regarding pace, we were able to be a factor front and center. We now have to carefully analyze how the fallings out could occur, to be able to improve in the future,” John Norris said fiercely.

A week later, Mach1 drivers were present at as many as three different locations. Nintendo Team Scheider driver Fabian Hellwig achieved a victory in the X30 junior class at the starting of the DMV Kart Championship. At the seniors, Niclas von Wendt-Pappenhausen landed on second place. Only a few kilometers away, the starting of the Rotax Euro Challenge took place in Belgian Genk. There, Mach1 Motorsport driver Maxi Fleischmann drove his first race using the new material and felt comfortable right from the beginning. During qualifying he wasn’t able to drive times due to a technical falling out and had to start the Heats from the last positions respectively. Because of three good results he then managed to improve his position from 55th to 23rd and immediately qualified for the finale. He finished this on 21st place and was content in the end: “The result is satisfying because this has been my first race after a longer break. We tested again on Monday and found a couple of tenth of seconds again, which causes me to feel confident about the coming races,” said Maxi Fleischmann. In Belgium as well, Julian Müller started at the X30 Challenge Europe in Mariembourg. The young man from Cologne held his own in the international starting field and just barely missed entering the finals as the second strongest German driver. During the b-finale he then managed to establish himself in the front field, but had to end his weekend prematurely due to an accident.

During the past weekend, Mach1 Motorsport started at three different races again. As many as seven Mach1 drivers wanted to go strong at the premiere of the German Vega Trophy in Hahn. Unfortunately, Julian Müller and Sebastian Schwendt had to cancel their appearances beforehand due to illnesses. Alexander Heil (X30), Lukas Korsch (X30) and Philipp Heim (X30J), as well as both Nintendo Team Scheider drivers Nick Hansen (X30) and Dominik Breier (KZ2) held the Mach1 flags high though. Alexander Heil drove his first race of the year and did a great job. In the end, he came in 4th and 5th during the finals. Philipp Heim achieved 14th place during qualifying and the pre-finale, was then involved in a collision during the second final though and had to end the race prematurely.

In Wackersdorf, old hands Toni Greif and John Norris started at the Kart-Trophy White-Blue in the shifterkarts class. Unfortunately, Toni had to park his kart during qualifying due to a technical defect and therefore had to start the first final from the last starting position. Toni then demonstrated his experience and fought his way forward up to 4th place. During the second final he temporarily even led the field, in the end came in second though, just barely missing first place. “My material worked perfectly and I’m happy about the great result, despite the unsuccessful qualifying”, Greif summed up. In the meantime, John Norris celebrated a premiere. He started with a shifterkart for the first time and felt very comfortable. After a short adaption phase, he already gave it his all during qualifying and finished on 7th place despite a membrane damage. He capped it all off during the races then and drove the fastest laps respectively. “It’s a very special feeling to drive a shifterkart. I got used to it pretty quickly though and am very content. Toni and I have demonstrated that our karts also work perfectly in this class,” said John in a good temper.

At his home track in Ampfing, Manuel Valier got in the mood for the starting of the German Kart Championship. At the starting of the Southern German ADAC Kart Cups, he set the pace in the KF2 class and didn’t give his opponents any chance for attacks. By achieving two victories, he laid a good foundation: “My competition was certainly not as strong as it will be at the DKM, but I now feel very well prepared nonetheless”, said Manuel.

On Thursday, the team will travel to the first big event of the German Kart Championship. The German Chassis manufacturer will be present in Ampfing with its drivers, a week later they will already travel to the WSK Euro in Genk and the starting of the ADAC Kart Masters in Hahn. 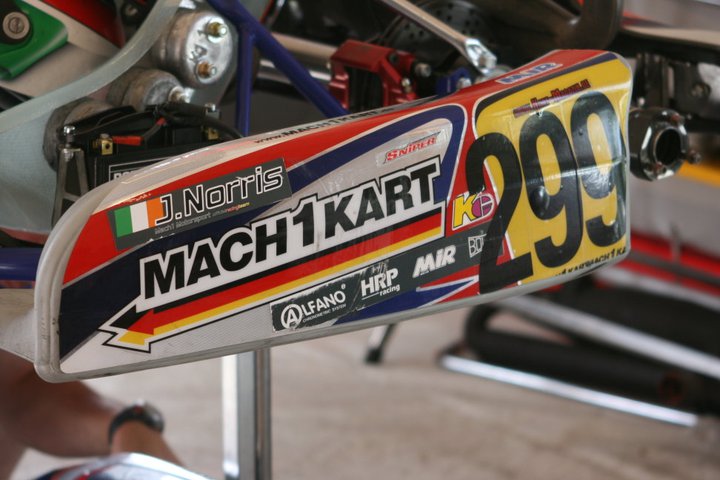 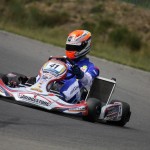