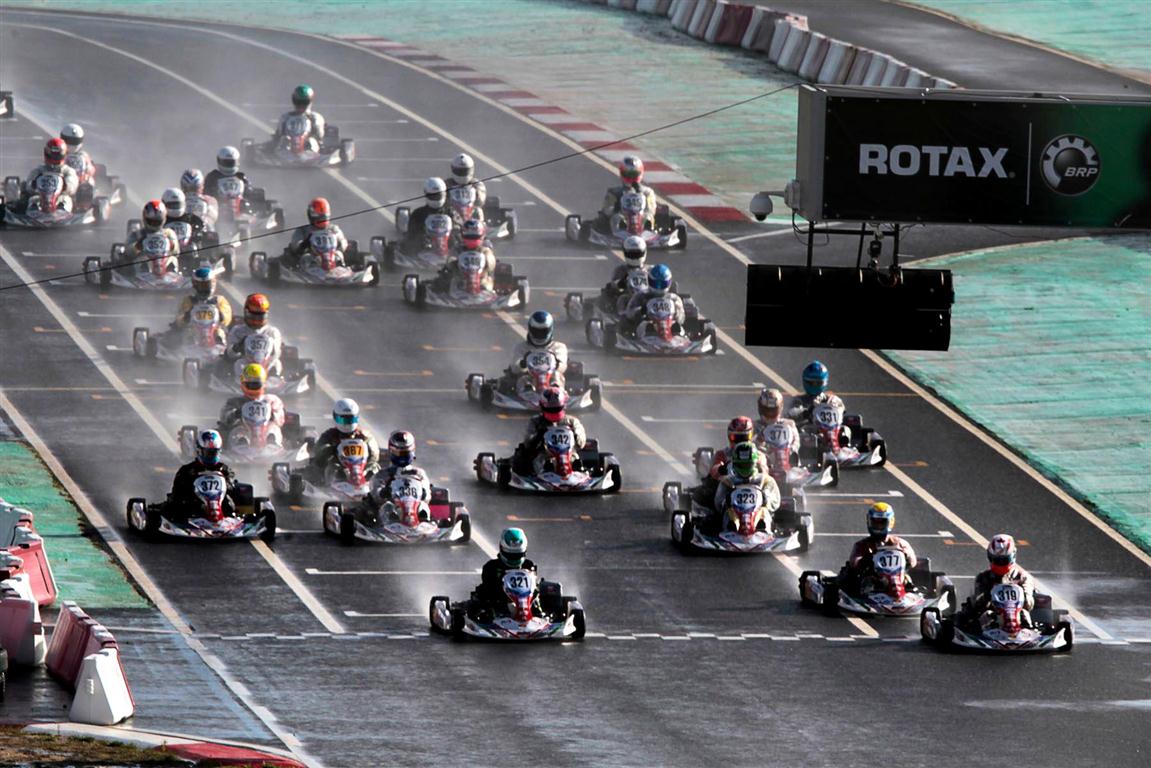 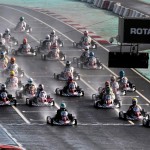 Mach1 Kart’s first Rotax MAX Grand Finals are over and they’ve been a great success. As sole supplier in the DD2 class, the German kart manufacturer broke new ground and was able to satisfy due to a high power density and quality “made in Germany”. After six exciting racing days, Canadian Ben Cooper crossed the finish line as the victor.

A huge challenge awaited Mach1 Kart at the end of the season in the form of the Rotax MAX Grand Finals in Portuguese Portimao. The manufacturer travelled to Portugal with a new racing truck and brought 80 brand-new Rotax DD2 Karts along with them. The great preparation of the team surrounding Martin Hetschel definitely paid off. The DD2-field was able to impress during free trainings already due to a high power density. During qualifying, as many as 40 drivers ranked within a second.

Fastest driver of the weekend was Canadian Ben Cooper: After coming in fourth during qualifying, he stormed to the front during the Heats and wouldn’t let go of his lead during pre-finals and finals. When crossing the finish line at the finals, he had an advance of close to a second and won ahead of Konstantins Calko from Latvia and Belgian Mathias Detige.

Mach1 Motorsport team leader Martin Hetschel was very content with the final week: “Everyone did an amazing job. Our karts worked perfectly and the drivers were thrilled with our product. We’ve received lots of positive feedback and are very happy to have presented ourselves so well in front of a wide international audience.”

What the drivers said about Mach1:

“Dear all at Mach 1, we would like to thank you for the help you gave us at the World Finals, nothing was too much trouble for you and even though we had bad luck on the circuit we had no complaints about the chassis. Thanks again and good luck for 2013!” (#342 Lucas Orrock /UK)

“Goodnight there! My son is a kart racer here in Brazil and he’s competing the Rotax Grand Finals in Portugal with the kart number 352. Nelsinho (my son) is a professional racer in Brazil and I got really impressed about the quality and details of your karts! Congrats for the quality of your karts.” (#352 Nelson Stanisci Junior/ Brasilien)

“Hi Martin, Firstly, thank you very much for all of your help, I thought the support from Mach1 was excellent. (#330 Tom Holland / UK)”

To everyone who is interested: The world final karts are up for sale now. The new Mach1 DD2-Chassis is based on the successful Mach1 FIA9 model, has got a 30mm framework, two front stabilizers and sniper adjusters for caster adjustments. Additionally, an in-house developed HRP-2-two-cycle braking system with balance adjustment, a typical glue set (incl. floor panel decoration) and aluminium front-wheel hubs of the 2013 model top the kart off. These have been in use for a maximum of three hours, are generally overhauled and will be sold with exclusive accessories. These include a set of DWT magnesium-rims with used Mojo D3 tires (slicks), a set of HRP aluminium- rims with used Mojo W2 tires (rain), a Tillett T12 seat, a bench tested engine Rotax MAX DD2 and additional gear ratios. As is Rotax-characteristic, there is an additional 6-months-guarantee on the engines. If you decide to buy a kart until December 30th 2012, you can even receive the extended guarantee of 12 months.

After the exhausting world final, Mach1 Motorsport is already looking into the future now. In 2013, the team is planning to start at the Winter Cup in Lonato, the WSK Euro Series, the DKM, the CIK-FIA Kart European Championship and the national series ADAC and DMV. The team will be at all of these races with their new team truck and will try to cause quite a stir again. Those who are interested are welcome to contact Martin Hetschel (info [at] mach1kart [dot] de or 07135/98490). 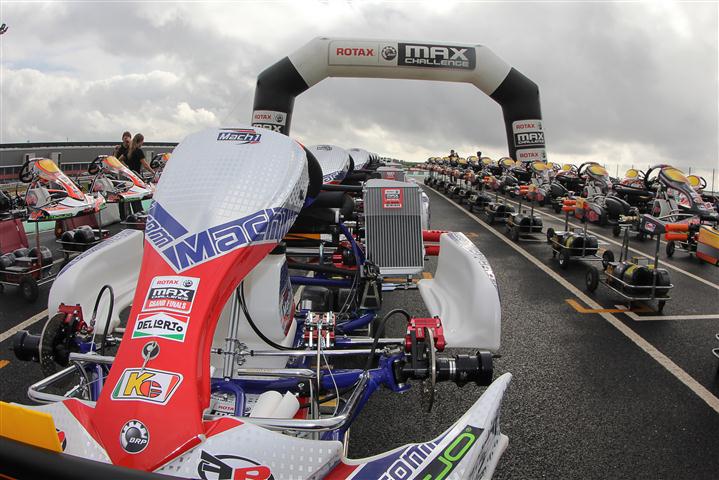 The German Kart manufacturer Mach1-Kart will be present at the Rotax Max Grand Finals and will be equipping the top category DD2 with uniformed chassis for the first time. At the world final, taking place from November 28th – December 1st at the Algarve Kartodrom in Portugal, more than 270 drivers from 60 nations will be starting.

For the 13th time already, the best drivers of the numerous national Rotax series will meet at the Rotax Max Grand Finals and fight for the well-respected titles over the course of five racing days. Engine manufacturer Rotax emphasizes equal opportunities and dictates unified karts for the various classes.

In the fastest class of the event, the MAX DD2, Mach1-Karts will be used this year for the first time ever. A big challenge for the manufacturer from Southern Germany: During the past weeks, 80 brand-new karts had to be constructed and completed. Additionally, the German Kart Championship finals took place, which Mach1-Kart finished as vice champion.

The efforts of the past weeks have been worth it for team leader Martin Hetschel though: “I’m proud to have mastered this challenge with my team. In our company’s long history, we’ve never equipped a class as sole provider. This is a great opportunity to present ourselves to a huge international audience. Rotax is creating something incredible here. The drivers come from all over the world and are competing with high ambitions. I’m very happy to be able to say that Mach1-Kart is a part of this mega event.”

In addition to grand racing action, Rotax is also providing a huge presence in the media. Next to numerous international journalists reporting on the races, all qualifyings, heats and final races will be broadcast live on the World Wide Web. Additionally, Rotax will be broadcasting a live-magazine every evening, in which the events of the day will be reported on and where people in charge, drivers and teams can have their say. “Being present in the media is very important to us. Our chassis will be visible on many pictures and therefore cause a huge interest for our product,” explains Martin Hetschel.

Qualifying took place on Wednesday afternoon and Martin Hetschel rejoiced: “In the end, 40 karts finished within a second – which in this top-class field proves that our chassis and the Rotax-engines are on an absolutely steady high level.”

On Thursday and Friday it will be decided at the Heats which 34 drivers will be fighting for the victories at the finals on Saturday. 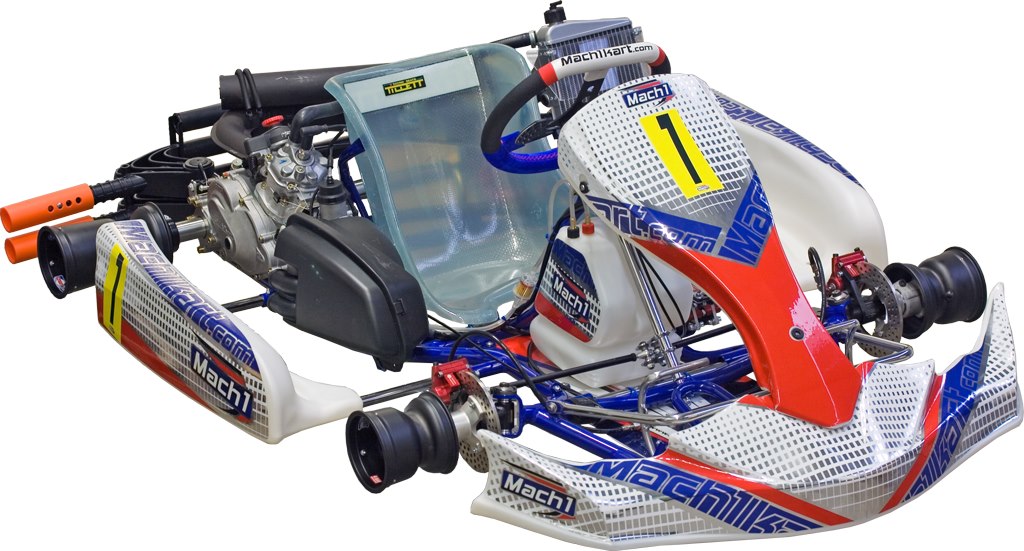 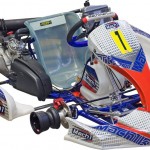 For the first time in the Rotax Grand Finals’ history, a German manufacturer will supply the chassis for this huge event held in Portugal (11/28 to 12/01/2012) this year. In that regard, Hetschel will bring out an evolution of the well proven Mach1 DD2 chassis, which is available from now on.

The new Mach1 DD2 based on the very successful FIA9 Kart suitable for KF, KZ and Rotax. The chassis is made from 30mm tubings, is equipped with two front torsion bars and Sniper Adjuster caster/camber kits. The own brand HRP brake system with adjustable brake balance and the fashionable Mach1 decal kit (with floor tray decal) is included as well as the Rotax rear protector. The completely race ready chassis is available from 7469€ (ex works, 19% VAT included). If you can wait until end of the year, you cab purchase a chassis from the Grand Finals at a very special price of 5595€. The used chassis were running max. five hours, will have a complete overhaul and exclusive accessories. These are one set of DWT magnesium rims (for slicks), one set of HRP aluminum rims (for wets), a Tillett T12 seat, a bench tested Rotax MAX DD2 engine and additional gears.

Due to the fact that there is a great demand for this chassis, we recommend a pre order. The chassis will be available from middle of December on. You will get further information from Mach1 dealers and importers as well as from Hetschel.

Here is the link to the official Rotax registration form (PDF)

Great delight for Mach1 Kart. The German chassis manufacturer is providing the chassis in DD2 category for the Rotax World Final 2012 in Portugal and herewith takes a big step into the international market.
For years, the Rotax Grand Finals stands for the biggest karting event of the year and brings together the best pilots from all around the world. Rotax, the engine manufacturer from Austria committed to equal opportunities and therefore equipping the pilots with brand new standard karts. The Rotax Max DD2 category will be equipped in 2012 by a German manufacturer. Mach1 Kart was selected as supplier and will deliver nearly 80 brand-new chassis to Portugal. Mach1 Motorsports team principal Martin Hetschel appreciates the commitment and feels significantly increased brand attention: “We are very proud to provide this prestigious Rotax race as a partner. We have put a lot of force in the development in recent years and must now reap the rewards. The Grand Finals will be accompanied by world media and thereby increase significantly our product appearance on the international market. “
The Grand Finals takes place for the first time at Kartodromo Internacional do Algarve (PORTIMAO / PORTUGAL) from November, 28th to December, 1st.