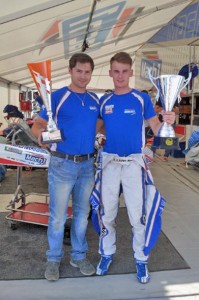 Even though the second racing weekend of the German Kart Championship at the Prokart Raceland Wackersdorf did not start ideally for the Mach1 Motorsport team, the German Chassis manufacturer’s driver John Norris still took the overall DKM lead in the end.

At the second race on the 1.222 m long track, the German Kart Championship did justice to its reputation of being one of the strongest racing series in Europe. 150 drivers started in the three grade series DSKM, DJKM and DKM and experienced a very special qualification Saturday. After initial sunshine, dark clouds emerged during the course of the afternoon and a strong rain shower partly flooded the track.

Irish John Norris felt very comfortable under these circumstances. Even though he only came in 14th during qualifying and had one falling out during a Heat, he was able to regulate the damages during the second deployment. John finished on second place and thereby gained 16th starting position for the first final. The sun shone for this race and best track conditions awaited the 34 drivers. John showed a great start and was able to fight his way forward to the great fifth place during the course of the race. He then jumped even further forward during the second race. John won the start and led the field. But in the second lap, he already had to let his pursuer pass him by and drove towards a safe second place. Thereby John became the overall leader of the German Kart Championship. “Our goal this year is winning the Championship. We’re now leading it, but there’s still a lot of work to do until the final in Genk”, said John at the finish line.

Meanwhile, his team mate Manuel Valier had a lot of bad luck. After a strong qualifying and ninth place, the Heats didn’t go according to the Munich resident’s plans. Manuel was only on 23rd starting position for the first final and even had to end this before the start. “That was really bitter for Manuel. His carburator’s needle valve was stuck”, Martin Hetschel explained in the evening. He gave it his all again during the second final though. From the last starting row, he fought his way forward and finished on 15th place. The races went equally mixed for Marco Forrer. The Swiss dropped out of both Heats and was on the last place on Saturday evening. He was then able to improve his position to 21st during the first final. His achievements were not rewarded though. He had to forfeit the second race after an accident.

Toni Greif used the race as preparation for the European Shifterkart Championship and had to go against strong competition. The field was completely filled up, counting 69 participants, and the drivers had to keep their calm during qualifying and the Heats. Toni was on the good 28th place after qualifying, then had diversified Heats and had to try qualifying for the final races in the repechage. He decided to start into this with new tires and qualified for the finals by winning the race. During the first final, he improved his performance up to 17th place and increased his speed even more during the second race. Toni was on the great 8th place in the middle of the race, but then lost a spark plug connector and had to let the whole field pass him by. He only came in 27th after 21 laps and was correspondingly disappointed. “Until the loss of the spark plug connector, everything went really well. I felt great and the Mach1 Shifterkart worked perfectly. After this good performance, I’m now looking forward to the European Championship”. Team leader Martin Hetschel is also very excited for this. “In addition to Toni, John will also start at the KZ2 EM. We have been constantly developing our Shifterkart Chassis over the past few months and are witnessing a continuous enhancement.”