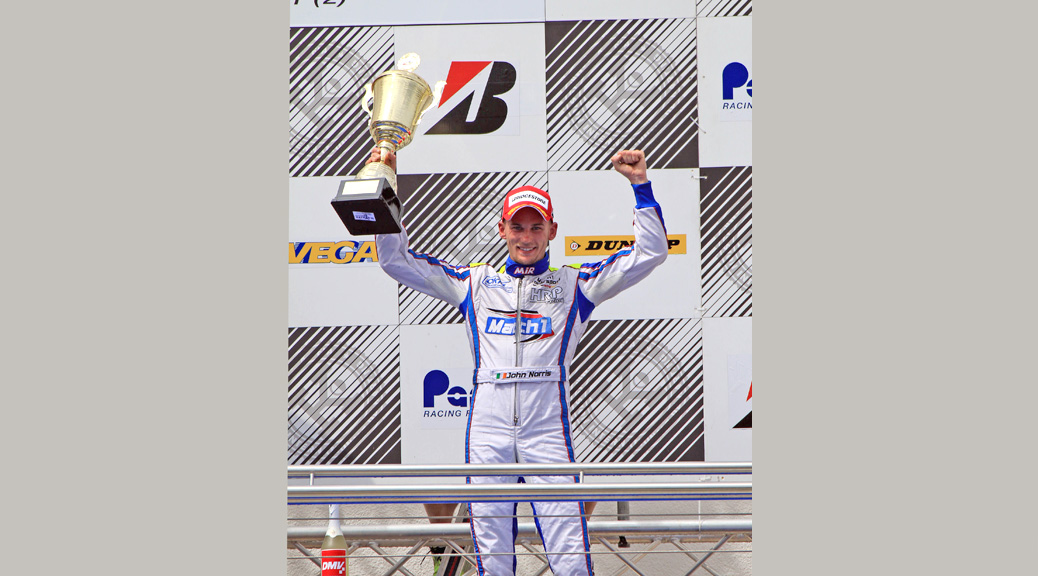 Last weekend there was huge joy among the camp of the German chassis manufacturer Mach1-Kart. At the CIK-FIA European Championship at the Prokart Raceland Wackersdorf, factory driver John Norris ended up on the sensational second place at the shifterkart class KZ2.

“I thought I was dreaming”, beamed team leader Martin Hetschel on Sunday evening. By achieving second place, the team celebrated one of the biggest international successes of the past years. It already became clear during qualifying that John Norris belonged to the best drivers in Wackersdorf. The Irishman was comfortable under differing conditions from sun to rain and came in 21st. All in all, 64 drivers from more than 21 nations started in Wackersdorf.

The five heats went without any problems this time and ended in second, fourth, fifth, ninth and tenth places. John thereby ended up on the 13th overall position of the pre-finale and caused team leader Martin Hetschel to be in a good mood: “We left the bad luck at home this time and were able to show our material’s potential throughout the whole event. John drove great races and the Mach1 chassis works well in rain as well as in sunshine.”

But that wasn’t the end of it yet: the shifterkart rookie did even better at the pre-finale. During the course of the 17 laps, John improved his position to the sensational third place. Things got exciting again shortly before the finale then. A strong rain shower flooded the track. The dark clouds had passed right on time for the start though and the 1.275m long track was drying. While John lost a little ground during the starting phase, he showed a great final spurt and finally came in on the great second place. “Thanks to the whole team for their sensational work”, Norris rejoiced on the winners’ podium. “We’ve been working towards this success for so long, it was really enough now. A big thank you to the whole team for their great work. The Mach1-kart was once again able to show its qualities”, added team leader Martin Hetschel.

In addition to John Norris, Swiss Marco Forrer also started for the Mach1 Motorsport team. He showed a good performance during his first start at the European Championship and was on 51st place after the heats. He gained seven positions during the repechage but missed entering the finals. “Marco has learned a lot this weekend. He got quicker and quicker every race and drove the top drivers’ times in the end”, Martin Hetschel praised his shifterkart rookie.

The team is going to travel to the next race of the CIK-FIA European Kart Championship in two weeks. The big finale is going to take place in Swedish Kristianstad. John is currently on the promising sixth overall position.