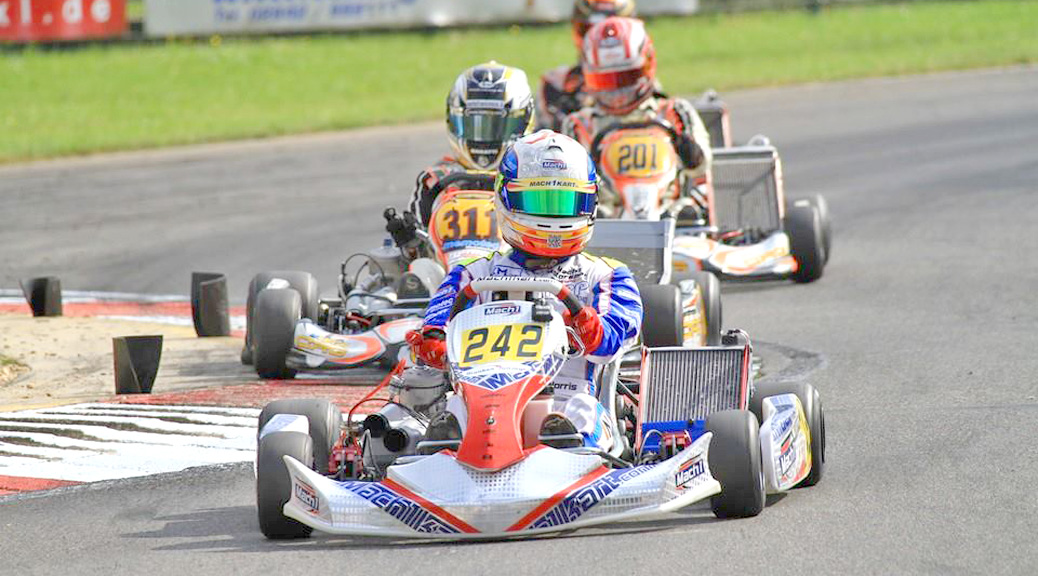 German chassis manufacturer Mach1 kart belonged to the strongest teams at the German Kart Championship in Kerpen as well. Factory driver John Norris ended up on the podium once again and is currently on the fourth place of the overall list of rankings at the Shifterkart Championship.

Everything didn’t go according to plan during shifterkart qualifying though – John Norris only ended up on 15th place. The Irishman fought his way forward during the heats though. By achieving a twelfth and a seventh place he was able to start into the first final race from 11th position. The racing conditions on Sunday couldn’t have been any better. In bright sunshine and with a high grip level, the numerous spectators were able to watch a great performance by John Norris. Due to a perfect start he was able to improve his performance during the first few meters already and got into some hard fights among the top-class field. During the last lap he was able to stand up to his opponents and came in on the great second place.

“I’m very happy that we are at the front again after Oschersleben”, rejoiced team leader Martin Hetschel. John was able to keep close to the leading drivers during the second race as well and collected important Championship points by coming in fourth. Unfortunately bad news from the racing administration caused the disapproval of the Mach1 Motorsport team. After the award ceremony, John received a ten-seconds-penalty and was thereby only ranked 12th. “I don’t know what to say right now. Race control is a great tool for the commissars; unfortunately it is often used in a wrong way. We can’t understand this penalty”, Martin Hetschel explained in the evening. On the overall list of rankings John is still on the promising fourth place, despite the lost points.

Brit Harrison Newey fought against the international competition at the DKM and showed a strong performance throughout the course of the weekend. During qualifying he was on sixth place of his group and was less than a tenth of a second behind the driver on third place – a perfect starting position for the following heats. During two great runs, he fought his way forward and finished on seventh and eighth places. After summation of the races he was on the great tenth place of the overall list of rankings on Saturday evening.

During the first final race he had some issues with his tires though and only came in 16th. During the second final he continuously fought his way forward and had already entered the top ten. Due to a slight slip-up he lost some ground though and came in 15th. “Harrison did a great job during the races and is getting along greatly, which is nice to see and which confirms our hard work”, team leader Martin Hetschel praised his rookie.

In three weeks the team is going to travel to the big finale of the DKM in Genk. A week before that the finale of the ADAC Kart Masters is going to take place in Wackersdorf. Mach1 drivers still have chances of winning the title there as well.