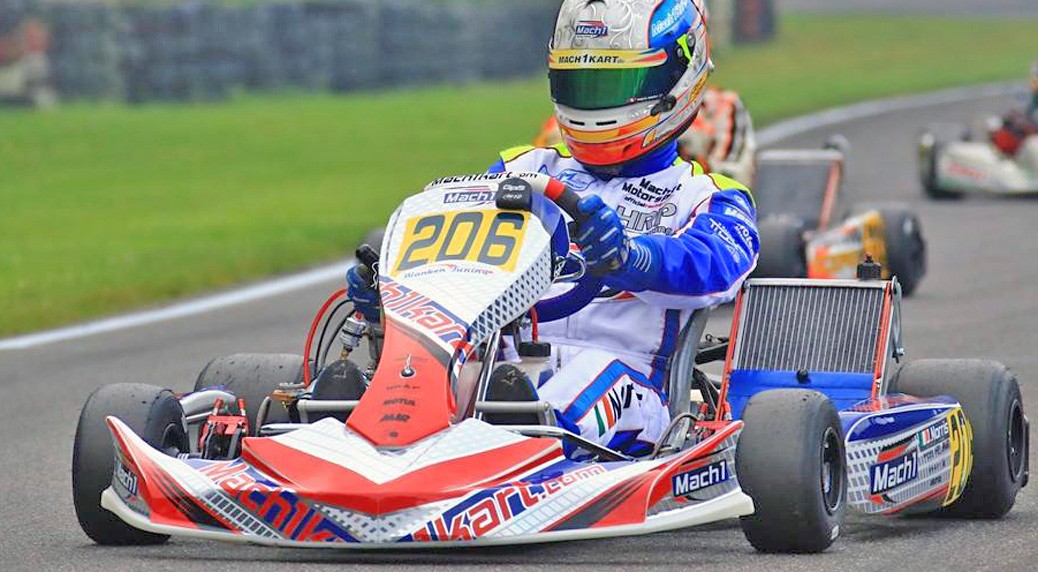 After a mixed season in the German Kart Championship, Mach1 Kart celebrated a successful ending to it last weekend. On the Erftlandring in Kerpen they achieved pole position and a place on the podium at the shifterkarts.

“This season has been like a rollercoaster-ride”, Martin Hetschel said before the finale in Kerpen. There, the drivers were once again able to prove the potential of the German chassis. In the strongly manned shifterkart class, John Norris drove in the front from the beginning and achieved pole position at qualifying. The Irishman proved that this result wasn’t a one-time-thing during the following heats. He secured the second starting position for the first final race due to a victory and a third place.

From the first starting row, John achieved a perfect start and temporarily led the field. After 23 laps he came in on the great third place and thereby achieved his first place on the podium this season. Unfortunately he got into a collision during the second final race and had to end the race prematurely. Team leader Martin Hetschel was still content: “Our material has worked perfectly this weekend. It was great to watch the drivers.”

In addition to Norris, Canadian Philip Orcic drove among the top ten as well. He entered the first final race from 16th place and fought his way forward up to seventh place due to a strong performance. The second race didn’t go ideally then, the setup of his tires wasn’t quite right, which is why he lost some ground and only came in 16th.

Pawel Myskier and Thomas Neumann had bad luck. Both drivers started weakened by the flu and weren’t able to drive the final races. “This was very unfortunate. Pawel was on the great 14th place after the heats. But without his strength he wasn’t able to endure the final races. Thomas shared the same fate. Despite this we can still be content with the season.

Even though not everything went according to plan, we’ve managed to cause quite a stir a couple of times with our product”, Martin Hetschel summed up.

Next weekend, numerous Mach1 drivers are going to start at the ADAC federal final run in Bopfingen. One week later, the factory team is going to travel to the IAME International Finals in Le Mans (France).