Last weekend, Mach1 Motorsport travelled to the IAME International Finals in Le Mans with nine drivers. Moreover, the German chassis manufacturer sent John Norris to the Vortex-Rok world final in Lonato as a soloist and showed strong performances in France as well as in Italy.

Last weekend, more than 300 drivers met up for the IAME International Final on the challenging track in French Le Mans. Old hand and two-time champion of the years 2012 and 2014 Thierry Delre was able to impress. During qualifying of the gear class he was dealing with setup problems and ended up on 17th place. He was able to considerably improve his performance during the four heats though and found back to his usual pace quickly. Thierry experienced a major setback during the last heat on Saturday evening though: Being on sixth position, he had to park his kart prematurely due to a big end bearing defect. The Mach1 driver was followed by bad luck on Sunday as well. During the pre-finale he was involved in a collision and had to end the race prematurely. During the finale the kart driver then showed a great catching-up race and finished the race on the great eighth place.

Two more Mach1 drivers started among the strong shifter field: Corentin Gregoire from Belgium and Viny Sobrevia from France. Young Frenchman Viny Sobrevia started at his first international race and was able to impress by coming in 14th at the finale. His team mate Corentin Gregoire had some bad luck: He showed a solid performance during the heats, but then had to park his kart prematurely during the pre-finale as well as the final race due to a collision and a technical defect. “Thierry presented himself in the best light again. If we had had a little more luck, a place on the podium would surely have been possible this year. Viny and Corentin have done really well this weekend too and have shown that the Mach1 kart works well for lesser experienced drivers as well. Unfortunately we didn’t have the necessary racing luck at the shifterkarts this year”, team leader Martin Hetschel summed up.

Three Mach1 drivers started among the X30 senior field counting 123 drivers: Haavard Hallerud from Norway, Paul Pittham from Australia and Jonathan Williams from England. Haavard Hallerud showed a solid performance during qualifying and finished it on 29th place as the best Mach1 driver. He had less luck during the heats though and only qualified for the C-finale in the end, which he finished on the good 11th place. Second driver Paul Pittham qualified among the top 15, but was taken out of the ranking afterwards due to the wrong fuel. After some bad luck during the heats the Australian was still able to finish the C-finale on 9th place. Jonathan Williams continuously got better and achieved more racing experience during the heats. In the end he finished the C-finale on 25th place.

At the juniors, Cameron Boedler, Samuel Cornwell and Jarle Gaard fought for good results in the field counting almost 100 drivers. Cameron Boedler drove among the front field. The German-Brazilian already proved his possibilities by coming in 16th at qualifying, but had to deal with some setbacks during the heats despite a good fourth and sixth place. From 19th place he started into the final phase of the weekend. He finished the pre-finale and the finale on 18th places respectively after some fights for positions and lap times at top-three-level.

Samuel Cornwell only came in on 44th place at qualifying and missed qualifying for the finals by only three points after impressive catching-up races during the heats. He then showed a solid performance during the B-finale and finished this on third place. Norwegian Jarle Gaard celebrated his premiere on an international track. In the end, he was able to gather a lot of experience and achieved a satisfactory result by coming in 22nd at the C-finale. 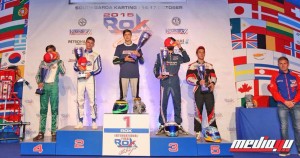 Parallel to the events in Le Mans things were heated in Lonato as well. The international Vortex-Rok finale took place on the traditional Italian race track the same weekend. Factory driver John Norris started there with the support of Polish Mach1 kart-importer Kornel Lenartovicz. After two drivers had cancelled on short notice due to health issues, the Irishman travelled to Italy with a considerable training deficit. By achieving fifth place at qualifying of the field consisting of 56 drivers, the old hand made himself known at the beginning of the event already. Subsequently, John proved his qualities during the heats by achieving fifth, third and second places. During the finale, the Mach1 driver even raced forward to second place and thereby achieved the vice title at the Rok-World finale. “What a slap-bang action! I started with this engine concept for the first time and immediately felt comfortable with it. It’s a great result for me and the whole Mach1 team at the end of the season”, John rejoiced after the award ceremony.

Team leader Martin Hetschel’s summary was positive as well: “First I’d like to thank my importers MLC Motorsport (England), Delre Racing (Belgium), TP Motorsport (Norway), FKI (France) and Lenartovicz Motorsport (Poland). Without their great work, a success like this would not have been possible at the end of the year. Of course I’m also proud because our hard work throughout the past years is now paying off. More and more drivers are using our material and are proving to be competitive by national and international comparison. Thanks again to all drivers and teams for their trust and cooperation.”

The German chassis manufacturer keeps proving that this progress is not a coincidence: In the coming days, the new karts for the model year 2016 are going to be presented. Mach1 is offering track days again in cooperation with the successful Mach1 team DS Kartsport. The first round is going to take place on November 6th and 7th in Liedolsheim. Interested drivers and teams can register for the test days by phone (+49 7135 / 9849-0) or e-mail (info [at] mach1kart [dot] de).