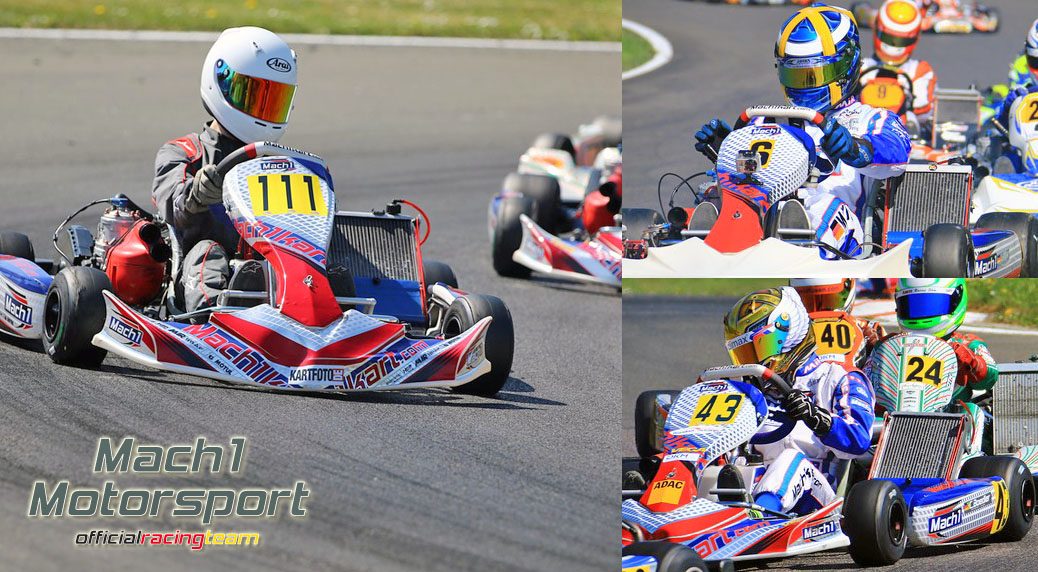 The only German chassis manufacturer Mach1 kart started at the season kick-off to the ADAC Kart Masters last weekend. The racing series of the second biggest automobile club in the world took place in Hahn and lured 167 drivers to the challenging Hunsrückring. The team surrounding Martin Hetschel started with three drivers and impressed everyone at the OK juniors.

Traditionally, the first appointment on the ADAC Kart Masters calendar is the event on the 1.377m long track in Hahn. Being the first of five events during the course of the season of Germany’s biggest kart racing series, the event had a lot to offer last weekend. Great kart racing weather with summer-like temperatures and a cloudless sky made for optimal conditions for a thrilling racing weekend in the Hunsrück.

Cameron Boedler started at the OK juniors for Mach1 Motorsport. The German-Brazilian drove on this track for the first time and had a couple of difficulties getting used to the new circumstances in the beginning. During qualifying, the Mach1 driver ended up on the 20th place for the following heats among the field consisting of 30 drivers. There, the youngster showed his potential by coming in 13th during the first heat. Unfortunately he lost a couple of positions during the second and was only ranked 22nd.

He then started into the first final race from 19th position. There, the young driver showed a great performance. Due to impressive maneuvers he passed by his opponents lap after lap and fought his way forward to tenth place until the finish line. That wasn’t the end of it yet though: During the second ranked race he was able to tie in with his performance and achieved another top ten result by coming in seventh.

Next to Cameron, Luka Wlömer started at the ADAC Kart Masters with a Mach1 kart for the first time. After a kart racing abstinence of nine months the Berlin resident used the past weekend as an opportunity to test the German quality material. On 21st place after the heats, the 14-year-old drove forward to the 16th place during the first race. During the second, the young driver was involved in a collision at the start though and had to park his kart in the off prematurely.

Julian Müller entered the strongly fought for shifterkart category as a soloist. All in all, 36 KZ2 drivers fought for the first championship points and gave drivers and teams hard tasks to solve. After a longer break, Julian Müller showed a successful comeback. On 12th place after qualifying, the young racer optimistically looked forward to the following heats. Julian had lots of bad luck there though. Two fallings out made him fall back to the end of the interim rankings and therefore hindered qualification for the final races.

Nevertheless, team leader Martin Hetschel summed things up positively in the evening: “My drivers showed good performances this weekend. Cameron has shown a great performance despite the fact that he doesn’t have as much experience on the track as his opponents. With a little more driving experience, a top five result definitely would have been possible for him. Luka and Julian have shown the potential of our material as well, even though luck wasn’t on their sides this time. I want to congratulate my partners DS Kartsport as well as LS Kart. Tim Hartelt and Niklas Kalus have shown great performances at the Bambini by achieving fourth and fifth places in Mach1 karts. Lucas Speck prevailed at the shifterkarts on second place – things can really continue like this!”

Mach1 Motorsport travelled to Spanish Zuera directly from Hahn. There, the team and Douglas Lundberg are going to start at the second race of the CIK-FIA KZ1 European Kart Championship next weekend.