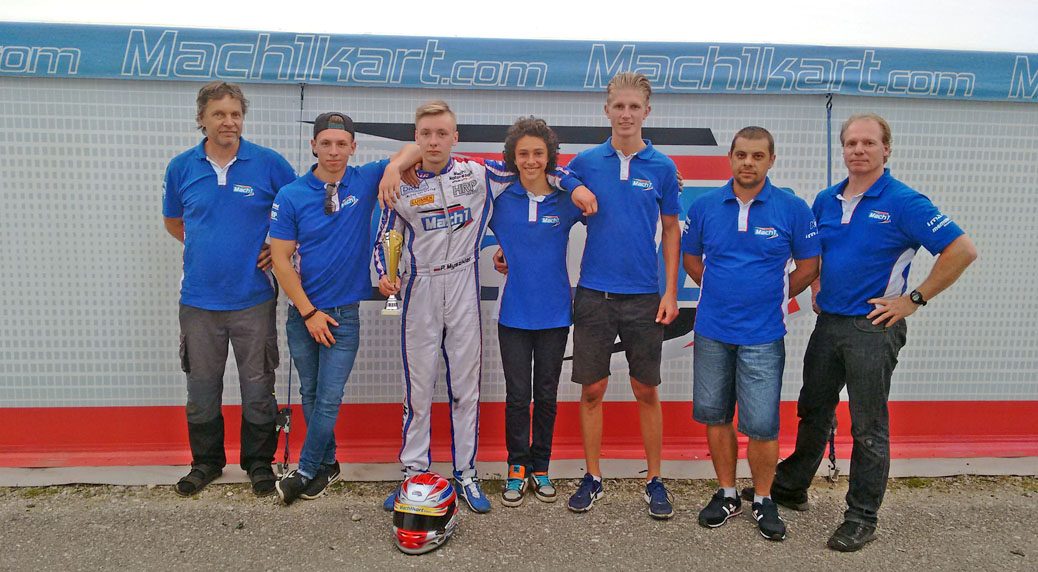 Last weekend, the Mach1 Motorsport team traveled to Bavarian Ampfing for the second event of the ADAC Kart Masters season. The German chassis manufacturer started at the racing event of the second biggest automobile club in the world with three drivers and highlighted their competitiveness.

Drivers, spectators and teams experienced a perfect kart racing weekend on the Schweppermannring in Ampfing. Midsummery temperatures and a mostly blue sky warranted thrilling racing action on the 1.063m long track from May 27th – 29th. 176 participants gathered at the track in Upper Bavaria and fought for the next championship points in Germany’s biggest kart racing series. Mach1 Motorsport started in three different categories and were able to prove their potential.

Cameron Boedler started with a Mach1 chassis and an engine by German manufacturer Rexon for the first time at the OK juniors. The German-Brazilian quarreled with the difficult track conditions during qualifying on Saturday on 18th place. “Quickly starting rainfall completely altered the conditions – I had to drive on the wet track in Ampfing for the first time and unfortunately wasn’t able to find my rhythm quickly enough”, the youngster explained. With slick tires, Cameron subsequently showed a strong upward trend. After the heats he went into the first race from 14th place and raced forward to 11th place then. During the second race, the young driver even achieved eighth place and thereby collected important championship points.

Pawel Myszkier celebrated his debut at the X30 senior category. Usually active at the shifterkarts, last weekend the Pole dared a guest start at the class with gearless IAME-engines and showed a great performance. After qualifying Pawel was on 23rd position in the 32-man field and thereby stayed considerably behind his own expectations. But during the heats the Mach1 factory driver already got along a lot better. Due to eighth and eleventh places he was on eighth position in the interim standings and started into the ranked races from there. During the first race Pawel lost a position due to turbulences but then gave it his all once more and finished his X30 premiere on the impressive fifth place.

Julian Müller also started as a soloist at the shifterkarts. After a messed up ADAC Kart Masters kick-off in Hahn (early drop out), things went considerably better for the Cologne resident in Ampfing. On 15th place at qualifying, Julian directly qualified for the final races by being on 10th place after the heats. The Mach1 Motorsport-protégé also finished the first ranked race on this position. During the second race he had to deal with a falling out though and thereby eliminated all hopes for another top ten result.

Nonetheless, team leader Martin Hetschel summed things up positively after the event: “My drivers were able to completely convince this weekend. Cameron and Pawel fought their ways forward really well and illustrated the efficiency of our chassis. Julian drove really well too. Without the falling out at the second race he surely would have been able to get a lot farther too. Thumbs up to the Mach1 factory supported teams as well. DS Kartsport and LS Kart drove among the front fields of all classes and thereby highlight the potential of our chassis once more.”