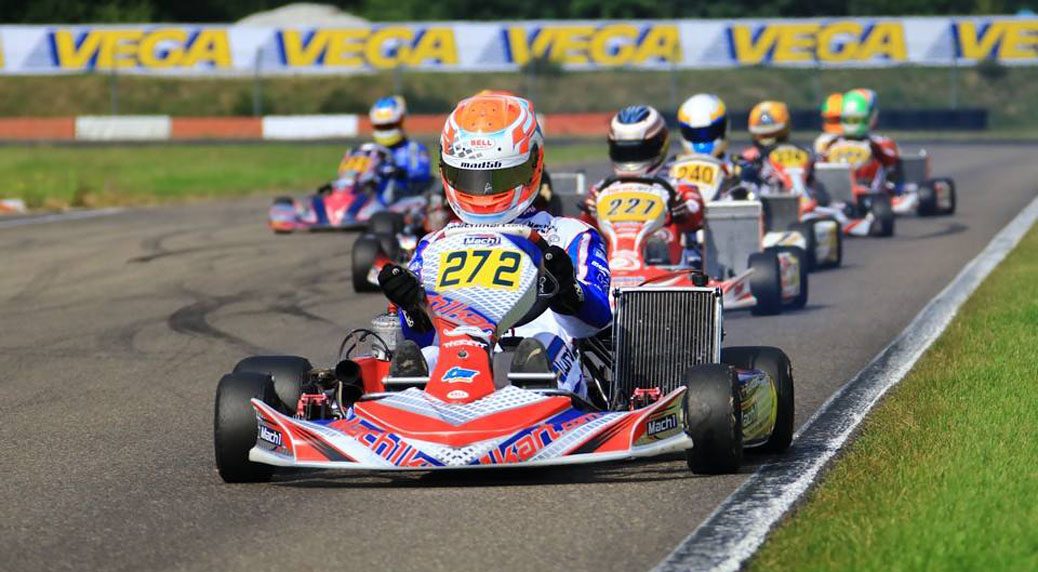 Only a week after the ADAC Kart Masters in Kerpen, the Mach1 Kart drivers travelled on to Belgian Genk. At the half-time of the German Kart Championship they met strong fields of participants counting 187 drivers from more than 25 nations. In the end the team collected important championship points, although it did not go as planned for all pilots.

Mach1 Motorsport started at the third event of the German Kart Championship on the 1.360m long track in Belgium with eight drivers. Two weeks before the finale of the European Kart Championship numerous international top drivers used the races as preparation, therefore the challenge for the drivers was significantly higher as usual.

The German chassis manufacturer wanted to drive into the top ranks again at the DSKM and sent the driver Douglas Lundberg, Pawel Myszkier and Jordi van Moorsel on grid. Swede Douglas Lundberg travelled to Genk highly motivated after a strong performance at the Swedish Championship and already impressed with top times during the free trainings. Light drizzle threw him back during qualifying though and Douglas was only ranked 45th. During the course of the heats he was then able to fight his way forward and achieved entering the finals directly by coming in 26th. “In this strong field with such a bad qualifying result actually a direct qualification to the finals was almost impossible. Douglas has delivered a strong performance though, things can continue like this tomorrow”, team leader Martin Hetschel commented.

Douglas had bad luck during the final races though. During the first race he started with four used tires and drove forward to 21st position. The Swede planned to attack during the second race. He started with four new tires and immediately gained some ground. He was then stopped by an opponent during the first lap. “That was very unfortunate. Douglas would have been a secure top ten candidate. We’ve gained a lot of knowledge that we can now use for the European Championship and we want to grow even more”, Hetschel continued.

Next to Lundberg, Jordi van Moorsel and Pawel Myskier also started at the DSKM. Pole Myskier came in 24th at qualifying and was the best Mach1 driver. A falling out during a heat cost him the safe qualification for the final races though. During the repechage he lost all chances due to a starting accident. Jordi van Moorsel was also able to highlight the potential of the Mach1-Kart material during the heats. By coming in ninth he was really close to the leading drivers. Unfortunately it wasn’t enough to enter the final races in the end though. “Both of them have shown good performances as well. However, despite full application, both drivers did not reach the finals for the first time, which is very bitter”, Hetschel revealed.

Five Mach1-protégés started at the DMSB Shifterkart Cup. The fastest drivers of the team were Marco Forrer and Julian Müller – both drove among the top ten during the finals. At the second race Forrer just barely missed placing in the cup ranks by coming in sixth. In the beginning, Müller neatly tied in with his performance of the ADAC Kart Masters. Unfortunately he was slowed down during the final races due to technical problems and came in only seventh and eighth. “Marco’s weekend went nearly  perfect. He has constantly increased during the championship and delivered his so far best result in Genk. Unfortunately Julian had to fight with technical problems and had to enter the races with his training engine”, Hetschel added.

The other three drivers experienced a weekend of ups and downs. Tim Schröder improved his performance during the course of the three racing days and closed the gap to the leading drivers. He collected championship points by coming in 19th and 16th. Thomas Neumann was on his way to the top ten after the heats again. He had to deal with a rough setback during the first final race then – underweight at the technical re-monitoring cost him his result. Instead of hanging his head he gave it his all again during the second race and drove forward from the back of the field to 15th position. Third driver Toni Greif had difficulties finding the right rhythm throughout the entire weekend and stayed far behind his possibilities. Hetschel is looking forward confidently to the next race in Oschersleben though: “Things can’t always go smoothly with eight drivers. We were able to show our potential in all classes though. Without the technical difficulties also Julian would have been a top ten candidate. With Toni, Tommi and Tim we will work hard so that they can reach their potential better in the next race!”

The team is going to travel to Genk again in two weeks. Then, the finale of the CIK-FIA European Kart Championship is going to take place there. Mach1 Kart will participate with five drivers in two classes.