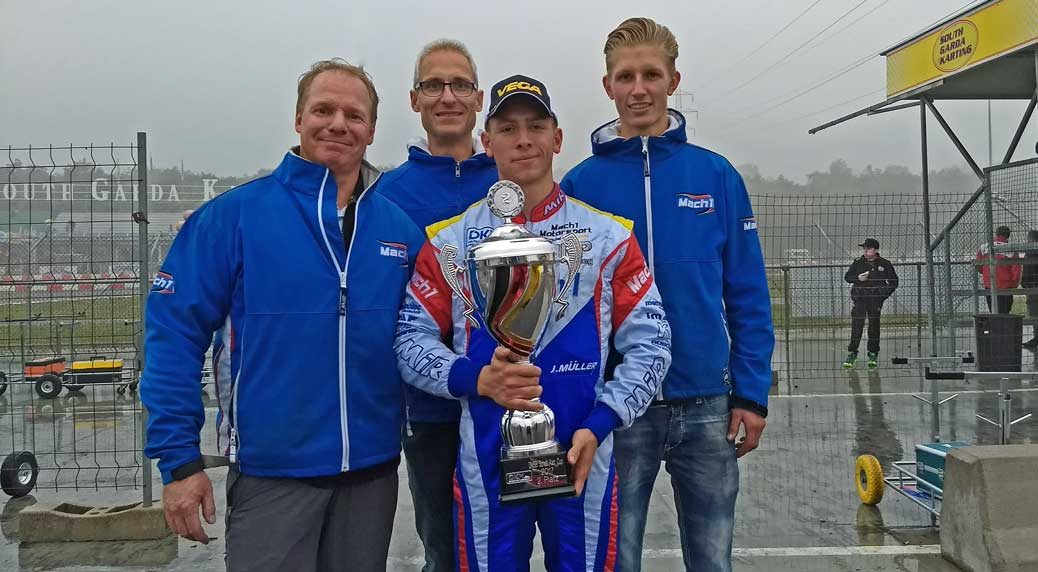 Last weekend Mach1 Motorsport travelled to the foreign round of the German Kart Championship in Lonato. The grade series started into its final ranked races on Italian ground for the first time on the South Garda Circuit. The team surrounding Martin Hetschel faced the challenges with eight drivers and achieved the vice title at the DMSB Shifterkart Cup with Julian Müller.

The final event of the German Kart Championship presented itself highly international from October 20th – 22nd in Italy. The championship took place in Italy for the first time and attracted high interest right away. More than 170 drivers from 20 nations gathered on the 1.200m long high-speed track and dueled in the four categories. After dry conditions on Saturday, continuous rain followed on Sunday and pushed drivers and materials to their limits.

A quartet of Mach1 Motorsport drivers started at the seniors. Cameron Boedler showed an especially good performance. The German-Brazilian drove among the front field of the high-class participants of the German Kart Championship and secured the tenth starting position for the final races due to seventh and ninth places at the heats. The youngster was able to impress on the wet track as well. With 13th and 11th positions Cameron just barely missed entering the top ten and thereby celebrated his best DKM result this year.

David Liwinski followed in his team mate’s wind shadow in the end. After messed up heats the Dutchman started into the first ranked race from 29th starting position and held his ground there with a strong catching-up race. He came in 19th at the first race and got even further at the second by coming in 17th in the end.

Luka Wlömer and Marcel Weber had to deal with disappointments. Both Mach1-protégés broke new ground on the South Garda Circuit but weren’t able to achieve the coveted final tickets in the end.

Daniel Stell started as a soloist at the German Shifterkart Championship. On Saturday things still looked liked an absolute success for the routine driver. He ended the heats on 11th and 3rd places and thereby the KZ2-driver highlighted his ambitions and took it up with the international top competition. Daniel started into Sunday from ninth place and finished the final races on 15th and 19th positions.

Julian Müller started at the DMSB Shifterkart Cup in Lonato as the title favorite. The Cologne resident drove among the front field in difficult conditions and finished the ranked races on seventh and tenth places. At the finish line, he could rejoice about achieving the vice championship at the DSKC.

Marcel Schultheiß caused a surprise. The Mach1 driver presented himself in top form at his DSKC-debut and drove among the forefront. From 13th place at qualifying Marcel already improved his performance during the heats to the seventh position in the interim rankings. Due to two sixth places at the races, the 21-year-old completed his successful debut.

Tim Schröder also ended the weekend with a smile on his face. The Mach1-protégé showed a great upwards trend throughout the entire event and achieved his best performance of the season in the end due to 14th and 11th places.

“An exciting year at the German Kart Championship is now behind us. The competition here in Lonato was strong – which is why I’m even happier about my team’s performance. The title was really close for Julian, but the vice championship is a great success too. Our speed was right at the other classes as well. It was a completely successful guest event for us here in Italy”, team leader Martin Hetschel summed up.