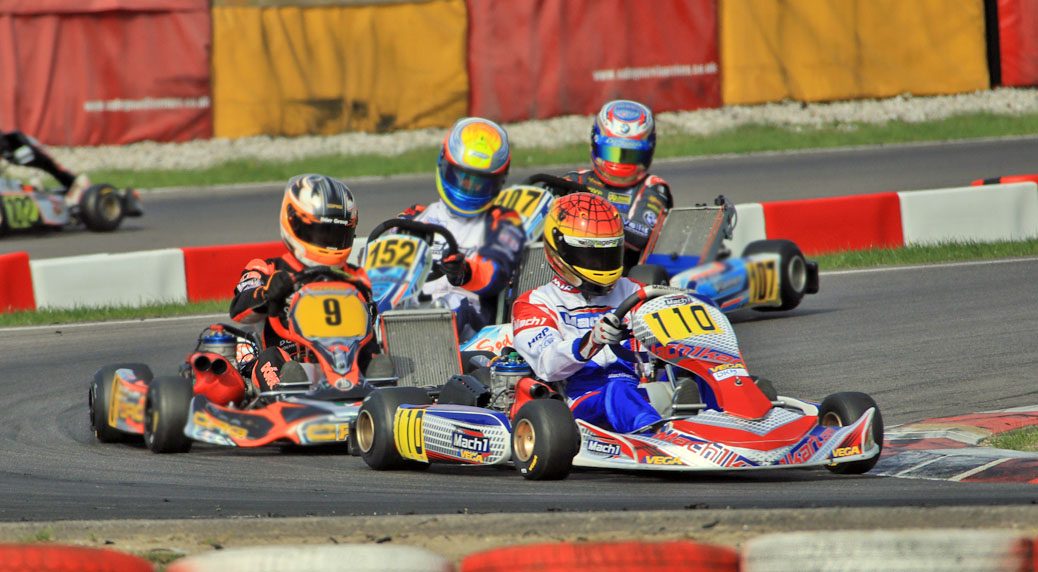 The German kart manufacturer Mach1 kart sent five drivers to the finale of the ADAC Kart Masters in Wackersdorf. The team showed a great performance, but lost a safe spot on the podium at the OK class in the end. The weekend was topped off by test drives in the new electric kart.

Last weekend everything was new for two drivers. Daniel Stell and Cameron Boedler changed their places. Stell, who ended the shifterkart world championship on the strong seventh place a couple of weeks ago, drove as a guest in the direct drive OK class. The
Bavarian quickly found his usual rhythm and came close to the leading drivers. At the first final race he came in on the strong eleventh place and had best chances to get even further during the second race. Unfortunately he was stopped due to a falling out.

Cameron Boedler had his debut at the shifterkart class KZ2. After 11th place at qualifying, he finished the heats on 13th place and then fought his way forward during the first final race to a good 12th place. Unfortunately the second final race ended prematurely for him too.

In addition to the duo, David Liwinski, Luka Wlömer and Marcel Weber also started at the Prokart Raceland. Liwinski showed an impressive performance. The Dutchman was unstoppable in the OK-class. He already proved his ambitions by gaining fifth starting position after qualifying and finished the heats on the fourth places respectively. He additionally achieved the fastest racing lap. During the first final race he was on his way to the top three, before he had to drop out early. From the end of the field consisting of 27 drivers he then fought his way forward during the second race and showed his potential by coming in 10th. “David has impressed us very much this weekend. The falling out during the first final race was very annoying, because he would’ve been able to win due to his speed”,
said team leader Martin Hetschel in the evening.

His two team mates showed a good development as well. After a cautious Saturday, Wlömer crossed the finish line on 18th and 19th places at the final races. Marcel Weber was in his wind shadow.

Within the framework of the event, Mach1 kart presented the newly developed electric kart with Bosch. Numerous drivers and everyone interested had the opportunity to get an idea of the new technology. “I’m very proud that we’re bringing this concept to the race track in
cooperation with Bosch. The performance of the electric engines is overwhelming. Currently we’re working on initiating the first electric kart racing series in the near future”, Hetschel gave a small outlook.

The team is going to continue in two weeks. Then, Mach1 Motorsport is going to start at the IAME International Finals in Le Mans, France. Only a week later the finale of the German Kart Championship is going to take place in Italian Lonato.