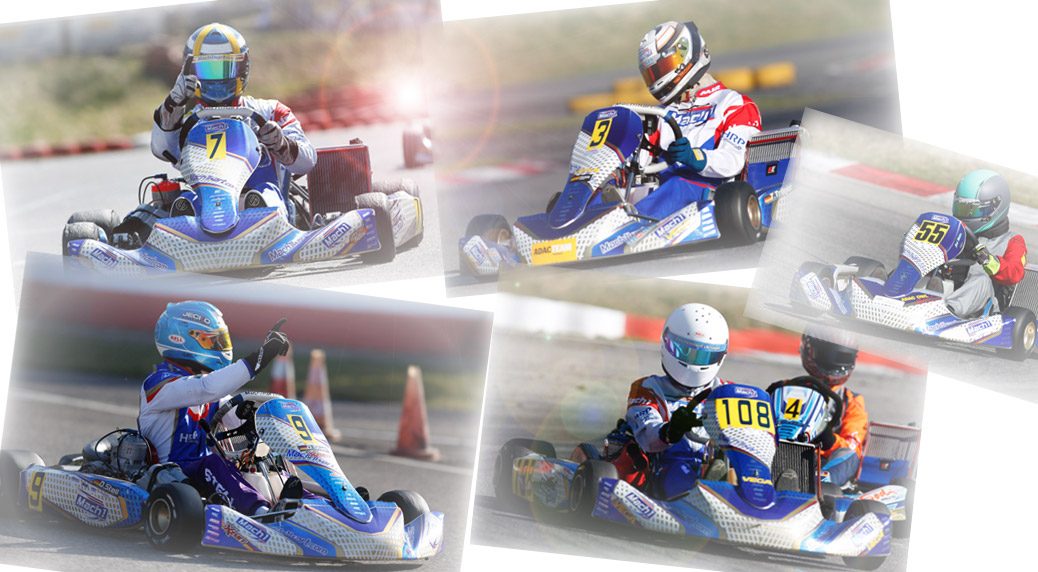 A nearly perfect racing weekend now lies behind the team of Mach1 Motorsport. The racing department of the German chassis manufacturer travelled to the kick-off event of the ADAC Kart Masters on the Schweppermannring in Ampfing. In the end, Mach1-Kart drove back home with two racing victories and the overall championship lead in the KZ2 class.

Last weekend, the eleventh season of the ADAC Kart Masters started in Bavarian Ampfing. For the beginning of the season, the national racing series took place on the southernmost track of this year’s calendar. 144 drivers started overall. Mach1 Motorsport concentrated on the OK, KZ2 and X30 senior categories.

Erik Müller broke new ground at the ADAC Kart Masters: He came from clubsport and now entered the national racing series. The youngster ended up behind his own expectations during qualifying by ending up on 26th place. Erik also got stuck in the far midfield during the heats. The Mach1 driver then hit the ground running during the first race. Due to great maneuvers, the young kart driver overtook his opponents and finally came in 17th. Erik unfortunately had to deal with a technical falling out at the second race then.

Team-newbie Tim Tröger started in the OK class with high hopes. After a falling out during the heats the mood was a little gloomy though. The Saxon didn’t get distracted by this though: From 19th place, the youngster raced through the field and drove his way forward to seventh place until crossing the finish line. That wasn’t enough yet: During the second ranked race, Tim improved his performance even more and finished the last race right behind the winner on second place.

David Liwinski drove among the front field of the OK class as well and caused joy in the team tent. From seventh place, the Dutchman crossed the finish lines of the races on fifth and fourth places respectively and thereby ended up among the highly competitive cup ranks twice.

Things went considerably heated for Mach1 Motorsport at the shifterkarts. Daniel Stell celebrated a phenomenal start into the weekend. After the fastest lap time during qualifying, the Hammelburg resident drove at the front of the field during the heats as well. During the first race he had to deal with a falling out due to a technical defect though. This did not lessen his fighting spirit though. With best times, the routine driver raced forward from the back of the field to sixth place at the second race and the lead during the third race and thereby perfected his performance.

Julian Müller also showed a top performance. The Cologne resident was always among the top positions of the class. On third place after the heats, the KZ2 driver ended up on the good fifth place at the first race. During the second race Julian took his chance and gained the lead. The ambitious driver raced across the finish line as the winner and even achieved to take the championship lead by coming in second at the third ranked race.

Team leader Martin Hetschel was very content with the weekend: “Things couldn’t have gone much better during these past two days. We were very successful in two categories. Tim had chances of winning the second OK race – our speed was definitely right. With the lead at the shifterkarts and third championship position in the OK class, we’re now looking forward highly motivated. I’d really like to praise DS Kartsport too: The team showed an impressive performance at the Bambini and stood on the winners’ podium with two drivers.”

Things are getting serious again for Mach1 Motorsport in only a couple of days. From April 13th – 15th, the German Kart Championship is going to start into its new season in Italian Lonato. The fast Germans want to drive among the forefront on the South Garda Karting Circuit as well.