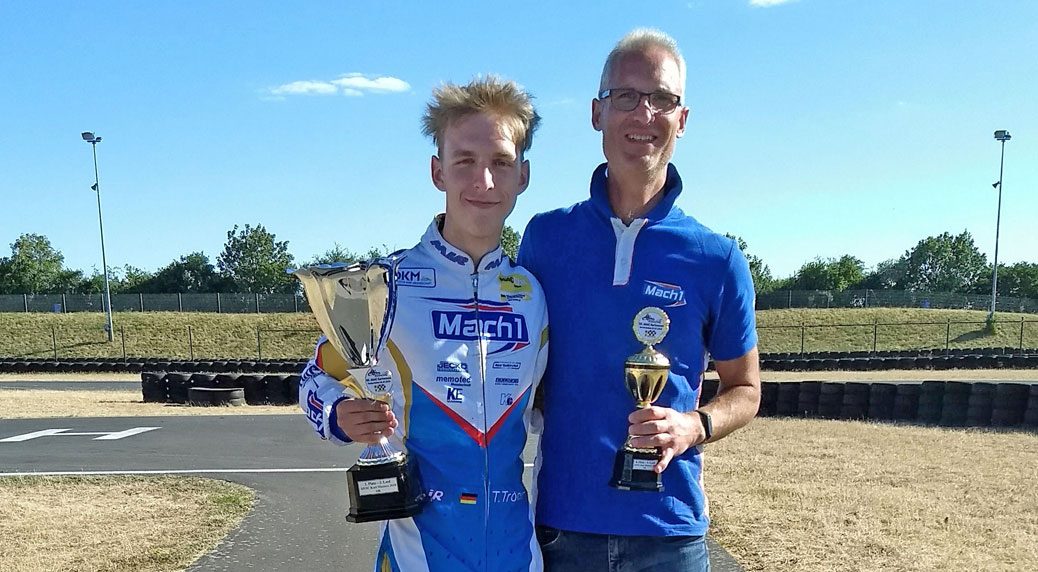 Huge joy for the German chassis manufacturer Mach1 Kart: At the half-time race of the ADAC Kart Masters in Oschersleben, OK-driver Tim Tröger achieved his first victory for Mach1 Motorsport and is on the strong second place of the championship. His team mate Erik Müller did well at the X30 seniors too.

The hard work of the past weeks is now paying off. Almost 150 participants started at the ADAC Kart Masters in Oschersleben last weekend and Mach1 Kart belonged to the favorites at the OK-class right away. Tim Tröger felt comfortable in beaming sunshine and made a first impression at qualifying by coming in third. He then achieved a victory at the following heats and was on second place of the interim rankings.

The two final races on Sunday were heated. The field was strongly manned with 33 drivers and Tim was always among the top ten places. During the first race, he fell back to fourth place and then fully attacked once more during the last race of the day. At the beginning of the race, Tim immediately took the lead and was unstoppable until the end of the race. Afterwards he was very happy about his first victory for his new team: “It’s a great feeling to be on top of the podium again. We’ve been competitive from the beginning and were able to build on this. I’d like to tie in with this at the next races.”

Tröger’s team mate Erik Müller was successful at the X30 seniors as well. During his first ADAC Kart Masters season he is getting faster and faster race by race and was on the great eighth place after the heats. He used this good starting position during the final races. The driver from East Westphalia fought thrilling duels with his competition among the front midfield and drove forward to seventh place – thereby he just barely missed placing among the cup ranks. The second race went turbulently: He unfortunately lost some ground this time and came in 15th.

It was a successful weekend in Oschersleben for team leader Martin Hetschel: “I’m very content and happy about Tim’s victory. The competition was strong but we’ve invested a lot of work during the past weeks and are now seeing great results – we’re building on this. Erik presented himself in great shape as well. I’d also like to thank our factory supported team DS Kartsport for their hospitality this weekend.”

Mach1 Motorsport is going to continue in three weeks with the next event of the ADAC Kart Masters – on the Erftlandring in Kerpen this time.