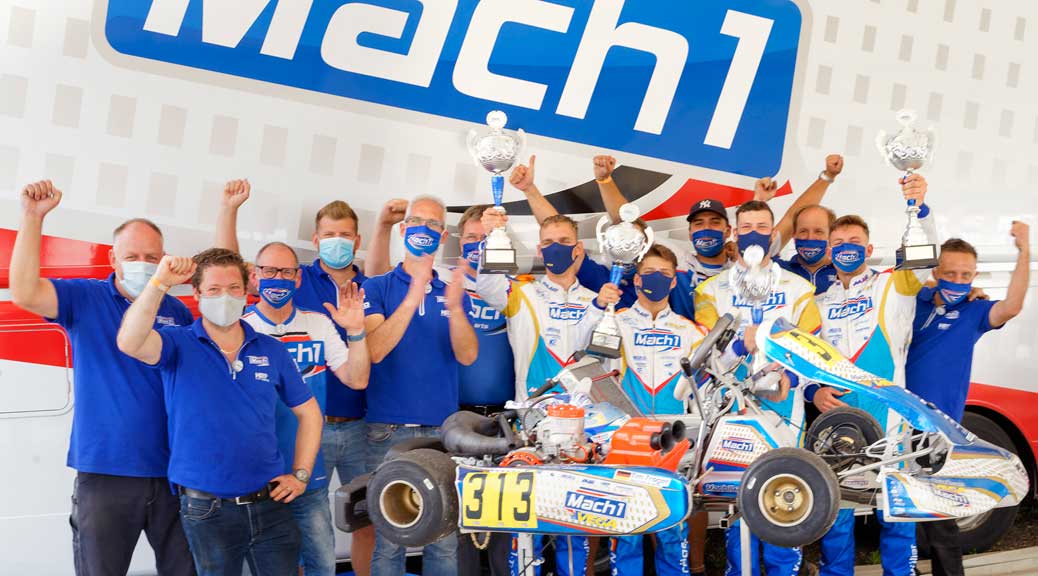 The second run of the German Kart Championship was a good place for Mach1 Motorsport last weekend in Kerpen. At the Erftlandring, the German kart manufacturer participated with five drivers in the race and celebrated a perfect performance. Tim Tröger celebrated a double victory in the DMSB-Manual-Kart-Cup. Julian Müller, Paul Voegeding and Niels Tröger also provided further cup rain for the traditional team from Brackenheim.

For the second time this season, the German Kart Championship took place in Kerpen last weekend. On the 1,107-meter long track in North Rhine-Westphalia, almost 110 participants within the five predicate series dueled for the next championship points. Under best weather conditions, the Mach1 motorsport fosterlings played to the gallery and represented the team around Martin Hetschel with flying colours.

Tom Kalender raced as soloist in the German Junior Kart Championship. In the fully occupied driver’s field, the youngster got into the act confidently and set a strong upward trend from position 23 in qualifying. In the first race still placed 13th, Tom scraped just past the top ten in the final race being placed eleventh.

Niels Tröger started, carrying the hope of Mach1 in the seniors in the DKM. As the runner-up in qualifying, the young driver already caused a sensation. Placed tenth in the heats as well as in the first race, Niels was still slowed down due to engine problems, but he got back his usual strength in the second race and pushed forward to a great second place with race best time.

In the DMSB-Manual-Kart-Cup, Tim Tröger presented himself as the man of the weekend. After the preliminary rounds, the 18-year-old was already at the top of the classification and did not start to slack. In both races, the Plauener driver retained the upper hand over the action and ultimately drove to a brilliant double victory. In the beginning of the weekend, team-mate Julian Müller was even placed in pole position after qualifying. In the heats as well as in the prefinals, however, the driver from Cologne was less lucky and fell behind. From the end of the field Julian started an impressive catch-up race, passed his opponent lap by lap and finished in a terrific second place.

Paul Voegeding was third in the league. In the intermediate placed in sixth position already, the Mach1 driver improved to second place in his pre-final. In the final race, Paul finally kept up with his two team-mates and finished in third position for a Mach1 motorsport triple success.

Martin Hetschel showed himself after the race with a grin on his face: “This was a great weekend for us. We as a team and our drivers did a great job. The hard work of the last few weeks has paid off – we must continue to build on this.”

In just under four weeks, Mach1 Motorsport will be back on the track.- Then the national ADAC Kart Masters in Mülsen, Saxony, will start the second event of the still young season.