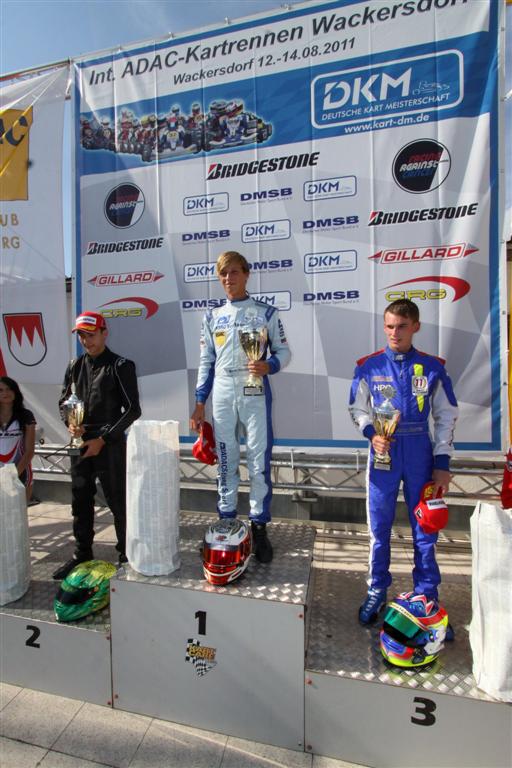 The factory team of the German chassis manufacture Mach1 Kart was once again able to compete at the highest level during the German Kart championship’s third race of the season at the Prokart Raceland Wackersdorf. All four of their drivers placed within the 15 best positions on Sunday. Irish John Norris even made it onto the podium, placing third.

John Norris had already made his competitors prick up their ears at his last race in Ampfing. During his first performance in the royal class of German kart racing he had started from pole position. Something similar happened in Wackersdorf. After coming in fourth at qualifying he managed to improve his performance during the heats to the second overall position and was thus able to start from the front row once again. Things went a little less smoothly during the sprint on Sunday though. With increasing race distance his kart lost performance and he fell back to sixth place. Some changes were then made for the finals and he managed to leap forward as soon as the race started. With multiple fastest laps John was able to keep up with the pace of the leading drivers throughout all of the 20 laps. He came in third, thus scoring his first rostrum placement of this season.

Alongside the driver from Ireland, Danish duo Jannick Flygenring and Martin Mortensen also started in Wackersdorf again. After the heats Flygenring placed 11th while Mortensen had to settle for the sprint’s 21st starting position due to some bad luck during the second heat. He managed to increase his performance during the eleven laps of the race though and came in 16th, while fellow countryman Flygenring had to stop his Mach1 Kart early due to a collision. During the final race of 25 kilometers Mortensen was able to match his performance of the first round and managed to fight his way to the outstanding 8th place. Flygenring on the other hand wasn’t so lucky. His frame had been damaged during the collision of the first race, making him unable to fully attack now.  But he still managed to drive good times and came in 15th.

Also starting at the Prokart Raceland was guest driver Lucas Speck. The youngster from Hildenhad already proven his abilities at the ADAC Kart Masters in Wackersdorf and also managed to compete at the highest level within DKM’s international field. After qualifying he had to cope with a big handicap during the heats, only starting from 29th position in each case. He managed to catch up though and improved his position to 26th. He really turned up his performance during the sprint. In splendid sunshine and midsummery temperatures he came in top-class 12th place after eleven laps. He thus started the final race from a good position. Unfortunately, an involuntary crash at the beginning of the race let him fall back a couple of positions again. Nonetheless, he was not intimidated by this and came in 13th in the end.

Team leader Martin Hetschel was absolutely thrilled in the evening: “It was a great racing weekend for our team. We’re on the right track and are once again able to compete at the highest level in the DKM. All four of our drivers have proven the possibilities of our material and let us hope for further successful races.” The development at the chassis sector is also pleasing. With the four Mach1 drivers the manufacturer from Meimsheim is the second strongest power in the field of the German Kart championship.

The group’s next race will take place in two weeks at the CIK-FIA U18 world championship in France.