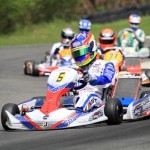 Mach1 Motorsport experienced a perfect start on the Erftlandring in Kerpen. At the opening of the German Kart Championship, they belonged to the fastest teams and in the end were only hindered due to strange incidents.

After the successful weekend in Oschersleben, Mach1 Motorsport travelled to Erftland to participate in the first of five races of the German Kart Championship only a week later. The highest ranking championship is experiencing a significant upturn, counting 49 participants from Germany and its adjacent countries. John Norris from Ireland as well as Lucas Speck and Lisa-Christin Brunner started for Mach1 Kart. 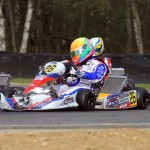 It was a weekend to forget for the only lady of the team though. Still weakened from the severe accident in Oschersleben, Lisa was not able to show her usual performance throughout the weekend. Hindered through collisions during the Heats, she decided for reasons concerning her health not to start in the repechage. Team leader Martin Hetschel tried to cheer his fosterling up in the evening anyway: “It hasn’t been an easy weekend for Lisa-Christin. She has shown a great learning improvement and is considerably increasing her performance. I wish her a quick recovery and an ounce of luck regarding the next races.”

In the meantime, her teammates John Norris and Lucas Speck were energetically fighting in the top field for places on the podium. Irishman Norris was among the fastest in all sessions and finished his Heats on first and fourth position respectively, which would have landed him on a top starting position in the first race. But a subsequent penalty of ten seconds made him lose 19 positions, resulting in the 14th starting place for the first race on Sunday. Due to a great performance, he managed to fight his way to the third position during the 23 laps of the ranked race and thus emphasized the abilities of his Mach1 Kart. During the finals he provided the best show of the weekend. Right after starting, John got in the lead but lost it again a few meters later due to colliding with an opponent and fell back to the rearmost midfield. Giving up was not an option for last year’s fifth winner though. Due to excellent maneuvers he left his top-class opponents behind and came in as the incredible third. A few minutes later this was followed by disillusionment once again though. Race-Control deemed one of John’s maneuvers unfair and penalized him with ten additional seconds again. This landed him on the 14th overall position and cost him the table leading. Martin Hetschel was very agitated after this decision: “We’ve watched the video sequences a couple of times and to us, this was a normal racing accident. Both drivers were fighting for the leading position and neither of them was willing to back down. In the end we can only accept the decision though and will give it our all again next time.” 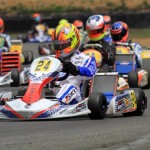 Everything did not go according to plan for Lucas Speck either. After coming in third and eighth in the Heats, the Rhinelander landed 7th starting position in the finals. Still, after a good start he had to involuntarily park his kart out of bounds during the second lap due to a damaged firing coil. During the second finale, he then managed to fight his way all the way from the back of the field to the outstanding 11th position. Therefore Lucas was able to gain six more Championship points and is now ranking 15th. “Lucas has proven his capability again and again. If it hadn’t been for the malfunction during the first race, places on the podium would have been very well possible for him”, complimented Martin Hetschel his driver.

In three weeks the team will travel to Bavarian Ampfing to attend the second race of the ADAC Kart Masters.