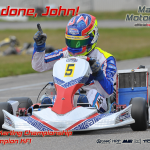 Consisting of 150 participants, the German Kart Championship’s field was strongly manned at the finale once again. The racing conditions were not easy though, especially on Saturday. Heavy rain caused chaos throughout the fields and called for highest concentration on the drivers’ part. John Norris seemed to be in his element though and, after coming in 15th during qualifying, fought his way forward during the Heats to 4th and 8th positions. All in all, he thereby achieved 7th starting position for the first final race. On Sunday, the 1.360m track had completely dried and from time to time, the sun even shone through the clouds. John achieved a good start and established himself in the top three from the beginning. Throughout the course of the race he achieved a higher speed than all of his competitors and took the lead at halftime. He managed to defend this position until the finish line. This triumph meant the first DKM victory in John’s career and caused applause from team leader Martin Hetschel: “An amazing race, the kart worked perfectly and John did a great job. Hopefully, we’ll manage to repeat this during the second race.”

Due to his victory, John still had the chance to gain the vice championship title – right before the finale he only had a deficit of six points. “The first race went without any problems, now I’ll try to win the second one as well”, said the Irishman confidently – and he kept his word. John achieved a perfect start and held his competitors at bay throughout all of the 19 laps. At the finish line, the double victory was in the bag and in addition, John was certain to be the vice champion of the German Kart Championship 2012. The elation at the award ceremony was correspondingly huge: “Perfect, everything worked so well throughout the second final. My chassis’ performance was steady without exception and is a huge part of this success. A big thanks to Mach1-Kart for the great cooperation and the continuous development throughout the course of the year.”

Lucas Speck started in the DKM as well. Having already achieved the ADAC Kart Masters title, he wanted to prove his talent in Genk as well and already showed a fast performance in the rain on Saturday. Unfortunately, a falling out during the second Heat caused him to fall back on 21st starting position for the first final race. During this, he fought his way forward to 16th position and additionally achieved 14th place during the second final. Therefore, Lucas ended up fifth-best German driver and just barely missed placing in the top ten by ending up on 11th position of the overall list of rankings. 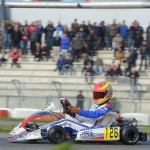 At the juniors, Cedric Piro experienced a turbulent racing weekend. After the free trainings and qualifying, the mood in the Saarland citizen’s camp was still good. Cedric achieved a solid 11th place. A falling out in the first Heat turned the tide though. By coming in 12th during the second Heat, he was only on 29th place in the end and had to qualify for the finals at the repechage on Sunday morning. This started pretty tumultuously and Cedric only drove on 7th position in the beginning. During the course of the race he gained a couple of positions though and qualified himself for the final races by coming in 4th in the end. From the next-to-last starting row, he then fought his way forward as if he’d been unleashed. Throughout the 16 laps, Cedric passed one opponent after another and finally crossed the finish line on the great 11th place. He then did even better during the second final race – despite another starting accident Cedric managed to achieve 8th place. This was then also his position in the overall list of rankings. 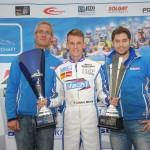 Team leader Martin Hetschel was hardly able to stop smiling in the evening: “What can I say? It’s been a successful racing day for Mach1 Motorsport. All three drivers were on a competitive basis and John has highlighted our chassis’ potential with his victory. After already having won the ADAC Kart Masters, this vice championship title is the second huge success for our team this season. A big thanks to all the drivers, mechanics and partners for their loyalty and support.”

In three weeks, a very special race abroad will be on the German manufacturer’s calendar: The team from Swabia will be travelling to Bahrain for the finale of the U18 World Championship.