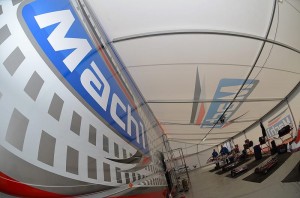 Unfortunately a good performance alone isn’t enough! The German Chassis manufacturer had to find this out the painful way at the European Championship races in Spain and Belgium. Even though on world class level, numerous little details cost them a countable result.

The start took place at the CIK-FIA KF3 & KF2 European Kart Championship in Spanish Alcaniz. With temperatures above 40°C, a difficult task awaited the 80 KFJ and 64 KF-drivers. Norwegian Nicolai Hagenaes represented the Mach1 Motorsport team at the juniors. During free trainings, the youngster showed his best performance so far and was able to drive the same times as the lead drivers. Unfortunately he wasn’t able to repeat this during qualifying. Ending up on 65th place, he stayed far behind his expectations and had a lot of work to do during the Heats. Nicolai managed these greatly then. By coming in 9th, 11th twice, 16th and 25th, he considerably improved his performance and was able to start into the pre-final from 19th place. He had to finish this among the top 17, but due to a quarrel during the start he lost important positions during the first lap already. At the finish line, he came in 18th and therefore just barely missed entering the finals. “Of course this is disappointing. After the difficult qualifying, he drove great races and was able to prove that he could have entered the top ten. We’re definitely fast enough, now everything else has to fall into place”, Martin Hetschel summed up the four racing days.

Factory driver John Norris started at the seniors and achieved a good start by coming in 23rd during qualifying. The Irishman wasn’t completely content with his result though: “I simply couldn’t catch free rounds and thereby lost a couple of tenth of seconds”, Norris explained a little later. But there is more: During the Heats, two accidents at the start and a defective ignition cost him all chances of placing on a good position. He was then able to prove his quality by coming in 9th during the last Heat, but he still had to start into the pre-final from the backmost midfield. He immediately gained a couple of positions due to a great starting phase, but then had to forfeit the race prematurely because of an engine damage during the second lap. “Simply frustrating, similar to what happened to Nicolai. Everyone is working really hard and bringing the product Mach1 forward. Our performance is good and we definitely don’t have to hide from the international audience. Unfortunately we’re currently not able to underline this performance with a countable result” said Hetschel thoughtfully.

John Norris had his next chance only two weeks later at the European Shifterkart Championship finale in Belgian Genk. Counting 84 drivers, the field was strongly manned and a big challenge. During free trainings and qualifying, Norris already proved that he could be counted on. By ending up on 17th place, he had a great starting position for the six following Heats. “Unfortunately the weather played a little trick on us. The other groups had a dryer track and were therefore faster”, said Norris after qualifying. The Heats went almost without any problems then. Two fifth places and an eleventh place were promising. In addition to these there unfortunately was also a falling out and a disqualification due to underweight. “We had to change between dry- and rain-kart a couple of times throughout the course of the day. Unfortunately I started without my rain-suit once and thereby was underweight, which was really annoying”, said John self-critically. Things got even worse during the pre-final then: Due to a starting accident he fell back to the end of the field, was repeatedly able to start impressive catching up races though and ploughed through the international field. In the end his efforts were not rewarded though; ending up on 18th place, John missed the final by one position. “Just like in Alcaniz, our performance was really good. Let’s not forget that this was John’s third KZ2-race and our second start among such an impressive starting field”, said Martin Hetschel in the evening.

In a couple of days the team will be travelling to Kerpen to the Bridgestone Summer Cup and then, a week later, to the halftime race of the German Kart Championship.