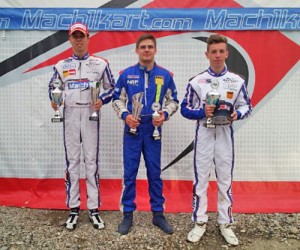 The Mach1 Motorsport team travelled to Bavarian Ampfing for the half time race of the ADAC Kart Masters. Ranked races five and six took place on the 1.063m long track and Mach1 was once again able to impress with their drivers. The team consolidated its’ double lead at the X30 seniors.

Alexander Heil and Julian Müller set the pace in the strongly manned X30 senior class once again. The successful duo could be found in the top five of qualifying and the Heats. In summation of the qualification races, Heil came in on the great second place. Müller almost gained pole position. But despite winning one Heat, he lost important places during the second run due to a 10-seconds-penalty and only came in on 8th starting position.

During the first final, things got exciting again in the strongest class of the ADAC Kart Masters. Temporarily, more than seven drivers had chances of winning. At the finish line, both drivers had reason to rejoice then. Julian Müller had fought his way to second place due to a great race, while Heil followed on fifth place. The second race didn’t go as smoothly though. While Heil was involved in the battle for victory again and placed on the third place of the winners’ podium, Müller’s Kart didn’t start in the beginning. With a huge backdrop, he finally started his catching up race over 18 laps and fought his way forward up to 24th position. On the overall Championship list of rankings, both drivers still managed to defend their double lead and are now looking forward to Kerpen. “Last year, I won in Kerpen”, laughed Julian Müller. Team leader Martin Hetschel was content as well: “Alexander und Julian highlighted that our material is competitive under any circumstances. We will give it our all to make sure both of them are still at the top at the end of the year.”

The racing weekend went less well for team mates Jan Jesse, Tim Linden, Sebastian Schwendt and Baldur Bahn. The quartet wasn’t able to free themselves from midfield and had to travel home with poor point-yields in the end.

In the meantime, Manuel Valier was able to gain some ground. The race was practically a home match for the Munich resident and he proved it on the track. While he had a bit of bad luck during the Heats on Saturday, he gave it his all during the finals on Sunday. Manuel fought his way forward to 3rd place and was able to defend this position during both races. Due to this result, he gained important Championship points and still has chances of placing in the top three on the overall list of rankings.

Unlucky fellow of the weekend was Philipp Heim. The junior was on a promising position after qualifying, but an accident during the first Heat forced him to quit the race prematurely. After a medical checkup, the doctors quickly gave the all-clear though. Starting at the finals on Sunday still wasn’t possible for him though. “Philipp still had to take medicine and therefore didn’t get clearance. I wish him a quick recovery and am looking forward to seeing him in a kart again very soon”, Martin Hetschel sent best wishes to his protégé on Sunday evening.

“Despite the accident, we can still draw a positive conclusion. We did very well in all of the classes and had several chances of winning races. In the X30 senior class, the Mach1-market share is more than 14%, making us the strongest force in this hard-fought class”, said Hetschel.

The next highlight awaits the team in a couple of days already. In Belgian Genk, the Chassis manufacturer will start at the final of the CIK-FIA KZ2 European Kart Championship with John Norris.