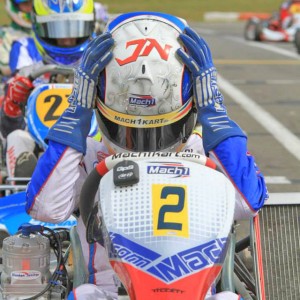 A DKM season hasn’t been this exciting in a long time. After the fourth event of the German top series, German chassis manufacturer Mach1 Motorsport still belongs to the title favorites and can hardly wait for the big finale. After winning the vice title last year, they’re now aiming for the title.

The 1.377m long track in the Hunsrück presented a big challenge for the drivers again. Fast bend speeds and wavy asphalt demanded the drivers’ full concentration. This posed no problem to the Mach1 Motorsport team’s protégés though: The quartet started into the semi final of the 2013 season highly motivated. 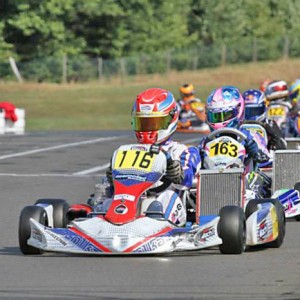 At the juniors, everything finally clicked into place for the newly appointed Norwegian Champion Nicolai Hagenaes. Having been on tenth starting position during qualifying, he was stopped by a broken chain during the first heat. Everything went smoothly during the second heat then and Nico showed his possibilities. Coming in sixth he managed to cut his losses and was able to start into the first final from the 22nd starting position. On the wet track he drove forward up to fifth place, until he was involuntarily stopped by a flat tire. He gave it his all again during the second race and improved his performance from 29th to 11th place in the end. Team leader Martin Hetschel praised his protégé in the evening: “Nico has done a great job again this weekend. He was absolutely competitive in the rain and also when it was dry again. Unfortunately he had some bad luck during the races.” Nicolai was content as well and is now optimistically looking forward to the finale in Genk: “I will give it my all again. I have felt very comfortable in my Mach1 chassis in Hahn and am therefore very confident.” 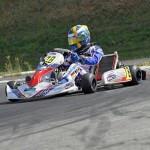 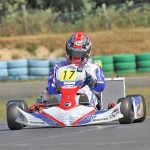 Julian Müller and Marco Forrer experienced a mixed weekend at the DKM. Guest driver Julian Müller fought with his influenza and engine problems throughout the entire weekend, which is why he wasn’t able to tie in with his usual performance. By coming in 13th during the first final, he still managed to gain the best from the situation. Swiss Marco Forrer drove in Hahn for the first time and had to get used to the challenging track first. During the course of the training and heats, he became faster and faster though and even managed to collect championship points by coming in 15th during the first final. Unfortunately he had to forfeit the second race prematurely due to a technical defect. “Both of them have done great jobs despite their problems. Unfortunately this wasn’t rewarded by good results in the end”, Martin Hetschel praised his protégés.

John Norris started as the team’s spearhead once again. The Irishman belonged to the title favorites prior to this weekend already and did justice to these expectations by coming in third during qualifying. He tried preserving his tires a little during the heats and secured a good starting position for the finals by coming in twice during both heats. The first race took place on the wet track and John gave it his all. Due to a perfect setup of his Mach1-kart, he fought his way to the top and finished the race as the winner. He thereby took a big step towards the championship title and had a lot in store for the second final. But immediately after the start, the dream of a double victory was shattered. John was pushed into the off by an opponent and had to forfeit the race after only half a lap due to another collision. “This falling out has surely shifted the decision about the championship title to our disadvantage. We can still positively look forward to the finale in Genk though; our chassis works perfectly under all conditions”, Martin Hetschel explained in the evening.

The DKM will now take an eight week-break after this exciting racing Sunday, before the final decisions will be made in Belgian Genk. John will travel there being on the overall third place and was able to achieve a double victory last year. Will there be a repetition this year?

Before that, a couple of other races still await the team though, among them the next-to-last event of the ADAC Kart Masters in Kerpen next weekend.