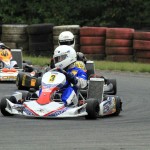 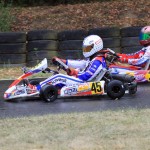 The German chassis manufacturer Mach1-Kart had imagined something different when it came to the fourth race of the ADAC Kart Masters in Kerpen. In addition to heavy rain and difficult track conditions, the drivers didn’t have a lot of luck as well. Alexander Heil is still leading the X30 seniors though.

After Hahn, Oschersleben and Ampfing, the strongest German kart racing series stopped at the Erftlandring in Kerpen for its fourth ranked race. 209 participants found their ways to the 1.107m long track and didn’t experience easy races. Heavy rain temporarily made for difficult track conditions and the fields got mixed up.

Philipp Heim started at the X30 juniors as a soloist, but things didn’t go as he’d planned during the heats on Saturday already. Having started into the racing day quite well by coming in 18th during qualifying, he already had to prematurely end his weekend after the second heat and had to do without starting on Sunday. During a collision at warm-up he hurt his wrist; then got the all-clear on Monday. The wrist is okay and Philipp can get back behind the wheel very soon. Despite the big disappointment, team leader Martin Hetschel tried to build up his youngster: “I wish Philipp a quick recovery and I hope that after his bad luck in Ampfing and here, he will now be spared from further injuries.”

All eyes were on Alexander Heil at the X30 seniors. As the overall leader, he had the chance of winning the title prematurely in Kerpen. Everything looked really well for Heil after the heats. He qualified for the first final as the second driver and experienced an exciting race. Among a group of four, he fought fiercely for a place on the podium. After 18 laps, he was on second place again and thereby postponed the decision to the second final. During this, Alexander temporarily took the lead, but had to deal with a major setback only a short while later. An opponent pushed him off the track, which damaged Alex’ chain and forced him to forfeit the race. “This is really annoying, because everything went well until the falling out. Things will get tough again now – I’ll have to fully attack in Wackersdorf,” said Alexander regarding the future.

Julian Müller experienced a weekend to forget. After his guest spot at the DKM, he’s now starting at the X30 seniors again and wanted to use his newly gained experiences to achieve a positive result. During free trainings and warm-up on Saturday he constantly drove best times. But he wasn’t able to keep up this performance during the course of the weekend then. By coming in 16th during the first final, he stayed far behind his own expectations. Things got even worse during the second final: Because of a minor repair right before the start, his race wasn’t counted. “Julian fought like a lion but wasn’t rewarded for this. He’ll still be able to become vice champion at the finale in Wackersdorf though.”

Jan Jesse, Tim Linden, Sebastian Schwendt and Lukas Korsch also started for Mach1 and the Factory Support Team DS Kartsport. The quartet had a hard time though and wasn’t able to score any points. In the end, the most successful driver was Sebastian Schwendt who came in on the 19th and 24th places.

In the evening, Martin Hetschel was happy to have survived the weekend: “We’ve obviously had a lot more successful races. The rain didn’t make the drivers’ and mechanics’ work any easier. The Mach1-chassis has proven its all-round qualities though. In sun on Friday, changing weather on Saturday and heavy rain on Sunday, the chassis has always done a great job.”

In four weeks, things will get serious at the ADAC Kart Masters. The finale of the racing series of the second biggest automobile club in the world will take place at the Prokart Raceland Wackersdorf.