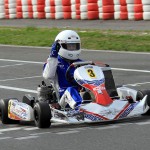 German chassis manufacturer Mach1 Kart sets a title winner at the ADAC Kart Masters for the third time in a row. At the finale of Germany’s strongest Kart racing series in Wackersdorf, Alexander Heil won in the IAME X30 senior category. Additionally, Mach1 won at the KF2.

Mach1 Kart’s success story continued. For the third time in a row, the team set a champion at the ADAC Kart Masters: Alexander Heil. At the previous race in Kerpen, Heil would have already been able to win the championship, but a falling out postponed this until the big finale in Wackersdorf. The IAME X30 seniors were the strongest class of the racing series during the course of the year and were able to impress in Upper Palatine due to a top-class field of participants once again. Alexander Heil, who started for the Mach1 Supported Team DS Kartsport, started into his races in a relaxed manner. He was on the good third place after the heats and increased his performance during the first final. Due to a race victory, he achieved an early decision regarding the fight for the title. “I’m overjoyed; we’ve been able to constantly score points this year and were always among the top ranks”, the new champion rejoiced. His brand colleagues Julian Müller and Jan Jesse had less reason to rejoice though. Both of them experienced a bad Saturday and had to travel home early after the heats.

At the juniors, Philipp Heim achieved clearance. After 29th place in the first final, he fought his way forward to 16th position during the second race and was able to collect championship points at the end of the season again. Team leader Martin Hetschel was happy about the results: “Philipp had some bad luck recently. Things went really well during the second final though. He drove competitive times and fought brilliantly. Congratulations!” Maximilian Bauer achieved a place in the top ten with a Mach1 kart. The Hanover resident fought his way from 23rd to 10th position during the second final and thereby achieved his best result of the year.

At the international KF2, Manuel Valier experienced an “almost” perfect season ending. By achieving the best time during qualifying, he started into the weekend successfully and followed this by winning one of the heats. Unfortunately, 12th place during the second heat threw him back a bit and he had to start into the first final from 6th position. There was no holding him back then. Unerringly, he drove to the top of the field and was able to celebrate his first victory of the season. The second race was a mere formality then. Manuel was able to defend his position and won again. On the overall list of rankings, he thereby still managed to achieve fifth place.

Lucas Speck achieved a successful debut. The Rhinelander started with an LS-kart, which is built on the basis of a Mach1 chassis. At his first event in the new kart he came in second during both final races.

Factory driver John Norris on the other hand started at the shifterkarts. He showed the Mach1 chassis’ potential at the KZ2 class. The Irishman was able to compete with his strong opponents and proved his will to gain a place on the podium by coming in fourth during qualifying. During the first final, he showed an exciting fight for the top five. This included a collision though and he had to end the race prematurely. He showed a great catching up race during the second final then and fought his way forward from the end of the field to 13th place.

It was a successful end of the season for team leader Martin Hetschel: “We can be very content with this year’s season. Once again a driver in a Mach1 chassis has achieved a title and we’ve also been very competitive in the other classes.”

In three weeks, the team is going to travel to the big finale of the German Kart Championship. In Belgian Genk, John Norris belongs to the title favorites in the premium class of German kart racing.