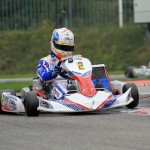 German chassis manufacturer Mach1 Motorsport said goodbye to the German Kart Championship with a strong performance. In Belgian Genk, factory driver John Norris secured third place on the overall list of rankings and stood on the winners’ podium once again.

Mach1 Motorsport had started into the 2013 DKM season as a big title favorite and lived up to this status throughout the course of the year. With John Norris, they established themselves at the top of the highest German kart racing grade and stayed part of the fight for the title until the end of the season. The conditions on the 1.360m long tack were not easy ones though. Temporary rain made choosing the right setup a difficult task. The Mach1 kart proved its winning qualities once again though.

During qualifying, John Norris had slight starting difficulties and wasn’t able to get further than 16th place. He then achieved a huge leap during the first heat. He fought his way forward to third position and thereby showed a first highlight. He then had to deal with a setback during the second heat though. He fell back considerably due to a collision with an opponent and even had to deal with a falling out in the end. Therefore, he only ended up on 13th place overall.

He then gave it his all again during the finals on Sunday and finished on the great eighth place at the first race. He then increased his performance even more during the last race of the year. On the dry track John was able to gain on the leading drivers and temporarily even led the field. He came in second and thereby secured third place on the overall list of rankings. “We fight for championship points during five weekends and ten races and in the end the drivers have the same amount of points on the overall list of rankings. We can be very content with our performance this weekend. John drove the fastest lap of the final race and used the all-round qualities of our chassis”, Martin Hetschel summed up afterwards.

In midfield, his Swiss teammate Marco Forrer could be found. After the heats he established himself on 20th position and was able to tie in with this performance during the finals. He came in 21st and 24th respectively. “Marco lacked experience on this difficult track. The rain on Friday made it even harder for him to find his rhythm”, commented team leader Martin Hetschel.

At the juniors, Nicolai Hagenaes faced the field consisting of 39 drivers. The races were made up of ups and downs for the Norwegian though. Only on 26th place during qualifying, he managed to achieve 8th and 13th places at the heats. This made him 12th on the overall list of rankings on Saturday evening. The first started in a very mixed manner for him though. On the wet track he only came in 23rd. The reigning Norwegian champion then provided a successful finish during the second final. From the back of midfield he managed to drive forward up to 12th place.

“Nico still lacks a little consistency. His basic speed is very high but unfortunately he’s not able to call it forward all the time. The second race proved what he’s capable of though”, Martin Hetschel praised his junior. “All in all it has been a great year for us. We’ve experienced a couple of ups and downs, which are always part of it. Even though we didn’t win the title, we can still be content. Mach1 kart was one of the best chassis at the German Kart Championship”, continued Hetschel.

The team is going to travel to the next big event in only a couple of days. Mach1 Motorsport will start at the IAME X30 International Cup in French Lyon.