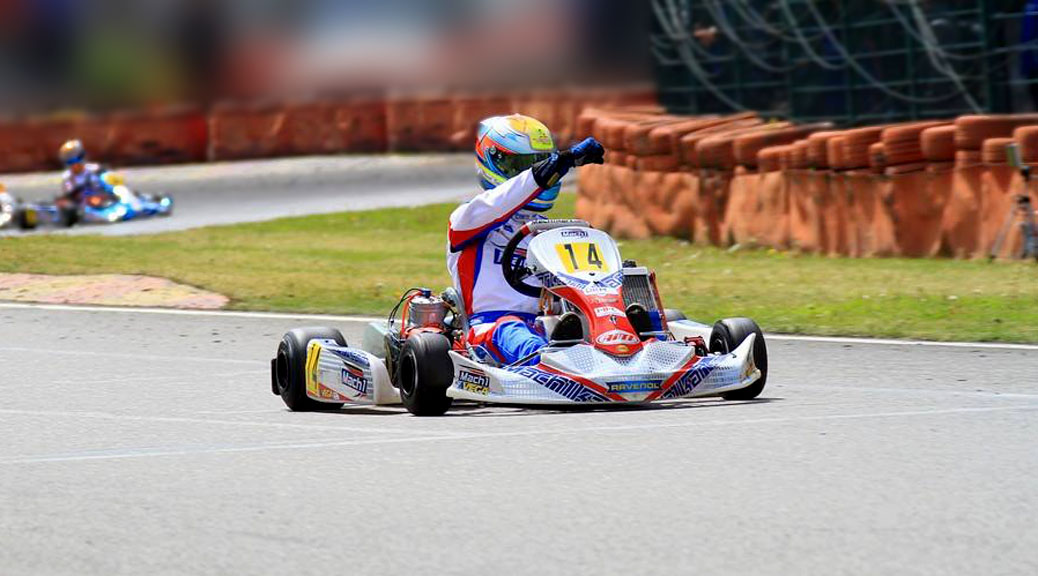 It could have been a very successful DKM kick-off for Mach1 Motorsport. In Bavarian Ampfing, the drivers belonged to the best and Manuel Valier secured a victory during the first DKM-race. Unfortunately the final races turned into a disaster then.

136 drivers from more than 20 nations had travelled to the first event of the German Kart Championship on the 1.060m long Schweppermannring in Ampfing. Four drivers came from the German chassis manufacturer’s team Mach1 Motorsport. Manuel Valier, Julian Müller and British Harrison Newey competed at the DKM.

The mood was still a little cautious after qualifying. The duel within the team was won by Valier who came in 11th. The Munich resident then considerably increased his performance during the heats. Coming in eighth and fifth, he was able to improve his performance on the wet track to the overall fourth position and was unstoppable during the first race. He fought his way past his strong opponents during a fierce starting phase and secured the kick-off victory. “Wow, Manuel’s race was incredible”, rejoiced team leader Martin Hetschel.

Everything looked like it was going to be repeated during the second race. Valier had a considerable advance up to two laps before the end of the race. But then everything came to a sudden end – Manuel lost his left back wheel and had to forfeit the race. “Nobody deserves something like this. The nuts just loosened. We’re now going to have to identify the problem. A double victory at the beginning of the season would have just been too good to be true”, said Martin Hetschel in the evening.

Harrison Newey crossed the finish line twice. The Brit is driving his first year in the KF class and had a slight backlog in the beginning. He was able to close the gap to the front field though and came in eighth. A ten seconds penalty threw him back to 18th place though. He made up for his lost positions during the second race then and came in 10th. The third driver, Julian Müller, experienced a difficult start into the first final. He had to forfeit the race prematurely due to an accident. Everything went smoothly during the second race though and he improved his performance to 26th place. Martin Hetschel praised both drivers: “Harrison and Julian have continuously improved their performances throughout the course of these three racing days. The competition is really strong this year.”

Irish John Norris broke new ground. He started at the German Shifterkart Championship for the first time and had to compete against a challenging field of participants – 63 drivers started in Ampfing. John already proved during qualifying that he is a serious opponent in the shifterkart class as well. He achieved a perfect starting position for the heats due to the overall seventh position. He finished these on second, eighth and 21st places. On the overall list of rankings, he fell back to 15th position but still managed to enter the finals directly. The start into the first final went quite mixed though. John fell back considerably. He fought his way back throughout the 24 laps though and came in on the great 10th place. “Our speed is really good, a lot is still possible during the second race”, Norris promised right before the start. But the race ended before it had even begun. John’s back wheel fell off the rim and he had to forfeit the race. “How did we deserve this?”, Martin Hetschel asked himself in the evening. “John and Manuel were in best shape and were both stopped due to such a stupid defect.”

The team is going to start at the next race in two weeks. The ADAC Kart Masters kick-off is going to take place on the Hunsrückring/Hahn.