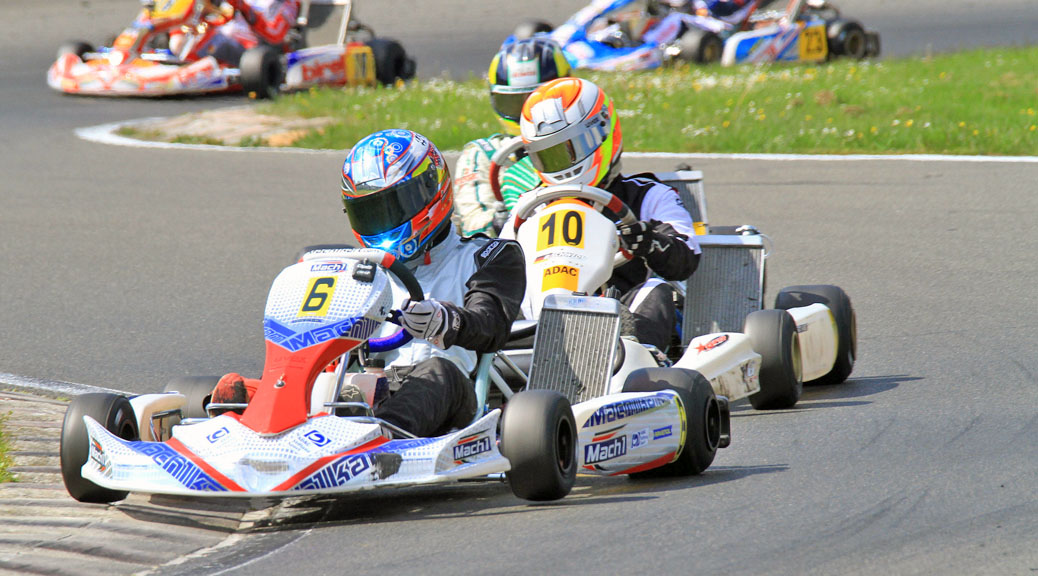 German chassis manufacturer Mach1 Kart travelled to the first of five events of the ADAC Kart Masters with high hopes – drivers of the factory team started in four different classes. At the KF junior class, Sophia Floersch celebrated her debut with Mach1 Motorsport. The fast ADAC Sports Foundation’s supported driver had to get used to the new chassis in the beginning. During the course of the trainings and heats, she became faster all the time and was aiming for the top ten on 14th place on Saturday evening. Unfortunately, her plan was stopped due to a falling out during the first final race. From the back of the field she was able to fight her way forward again during the second race though and ended up on the great 11th place. “We’ve shown our possibilities during the final races. Sophia got used to the new chassis quickly and was really fast. We will continue to work hard until Ampfing and then even more should be possible”, team leader Martin Hetschel said fiercely.

Philipp Heim showed a consistently strong performance at the X30 juniors. 37 youngsters started, of which only the best 34 would enter the finals in the end. Qualifying for the final races was no problem for Philipp. He was on 22nd starting position for the first final race and finished the races on 18th and 19th places.

Marco Forrer broke new ground: the Swiss started at the shifterkarts for the first time and faced a difficult task. Counting 50 drivers, the field was strongly manned. After a great qualifying and two thrilling heats, he achieved entering the finals and was able to improve his performance considerably. Coming in 20th and 16th, he was able to keep up with the front midfield and once again proved the high competitiveness of the Mach1 shifterkart chassis.

Julian Müller belonged to the favorites at the X30 seniors. Ending up on 6th place, the Cologne resident had a good starting position after qualifying and was able to tie in with this performance by achieving 6th place during the first heat. He then had some bad luck during the second. During the turbulent starting phase, he fell back considerably and only came in 22nd. This put him on 19th place on the overall list of rankings. Things didn’t get better during the first final race then. Once again, he was pushed off the track during the last lap and only came in 29th. Everything went smoothly during the last race of the weekend though. From the back of the field, Müller fought his way forward and was even able to collect some Championship points by coming in 12th. As second driver, Luca Walter got back into kart racing. The 2011 X30 junior Champion now started at the seniors and had to find his way back first. In the end, he came in 27th and 28th.

Even though the end results were quite sobering, Martin Hetschel still saw the positive side of the weekend: “Surely all of us had expected bigger successes. All in all it’s still looking good though. Our chassis’ performance is right and with a little bit more luck we could have landed on the podium.”

Mach1 Motorsport’s next chance is going to present itself on June 21st/22nd. The second event of the ADAC Kart Masters is going to take place in Bavarian Ampfing then.