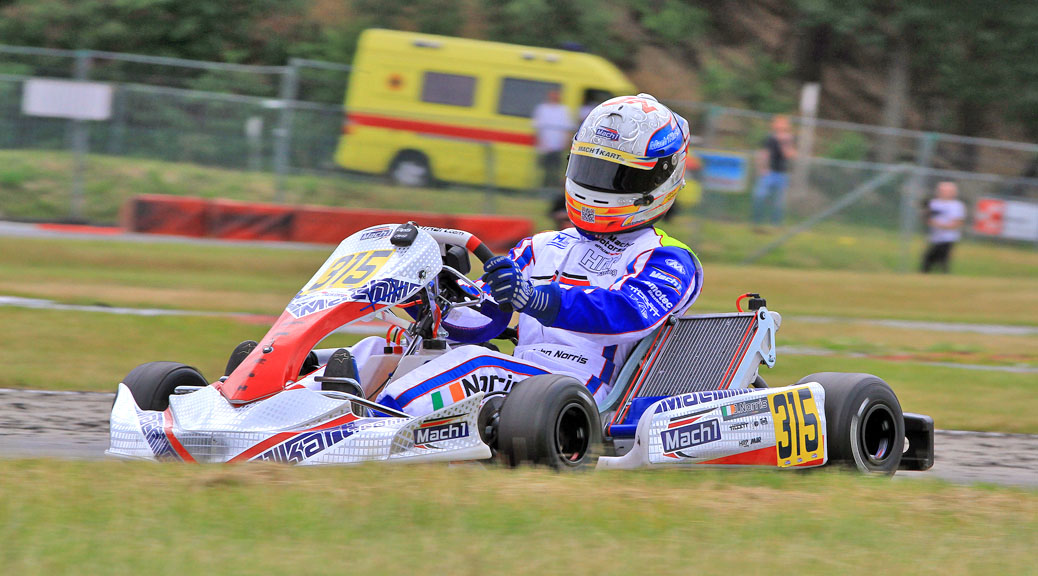 Last weekend, German chassis manufacturer Mach1-Kart went up against the strong competition at the CIK-FIA KZ2 European Championship on the Hogensbergdam Circuit in Genk. The team experienced an emotional roller-coaster ride, was then rewarded with a great result during the finale though.

Counting 79 drivers from 23 nations, strong competition awaited the Mach1 Motorsport team. After recent great successes at the KF classes, the manufacturer now wants to convince at the shifterkarts as well. Factory driver John Norris started at the event and already gave reason for an all-around good mood in the team’s tent after the free trainings. “We’re currently among the top ten. Looking at the field of participants, this is a great result”, said team leader Martin Hetschel confidently.

Qualifying provided a similar picture: John Norris secured the eleventh starting position and raised hopes for a successful racing course. From one of the front rows, he achieved a good start into the first of four heats and came in fourth. “Up until now, we can be very content. The chassis is working perfectly and John is showing us a strong performance”, Martin Hetschel summed up the events.

But from the second heat on, the team had to deal with a number of setbacks. Due to engine defects, Norris had to forfeit races twice while being among the top five and during the last heat, a turbulent development of the race cost him a front position in the end. The Irishman was only on the 49th place of the overall list of rankings on Saturday evening. “How much bad luck can someone have?”, Martin Hetschel asked himself in the evening.

Despite the bad starting position, the team stayed competitive and John Norris showed an incredible catching-up race during the pre-finale. From 25th starting position, he fought his way past his opponents lap after lap and finished on the impressive 12th place. Thereby he achieved entering the big finale and also made his team leader very happy: “What a race! John showed great catching-up maneuvers and really fought his way forward impressively.”

The Irish driver then showed a masterpiece race during the 23 laps of the finale. Due to a perfect start he came out of the first lap looking great and was unstoppable then. In his Mach1 kart he flew through the field and came in 12th again. In addition to the audience’s huge applause, he was also able to gain his first Championship points. “This was a sensational day for us. Not everyone can drive from 49th to 12th position. Not to forget that we went up against the world’s best KZ2 drivers. Our chassis worked perfectly with various grip rates and surely was a key to success”, Hetschel said happily before his trip home.

The next challenge is already waiting for the team next weekend. The second race of the season of the ADAC Kart Masters is going to take place in Bavarian Ampfing.