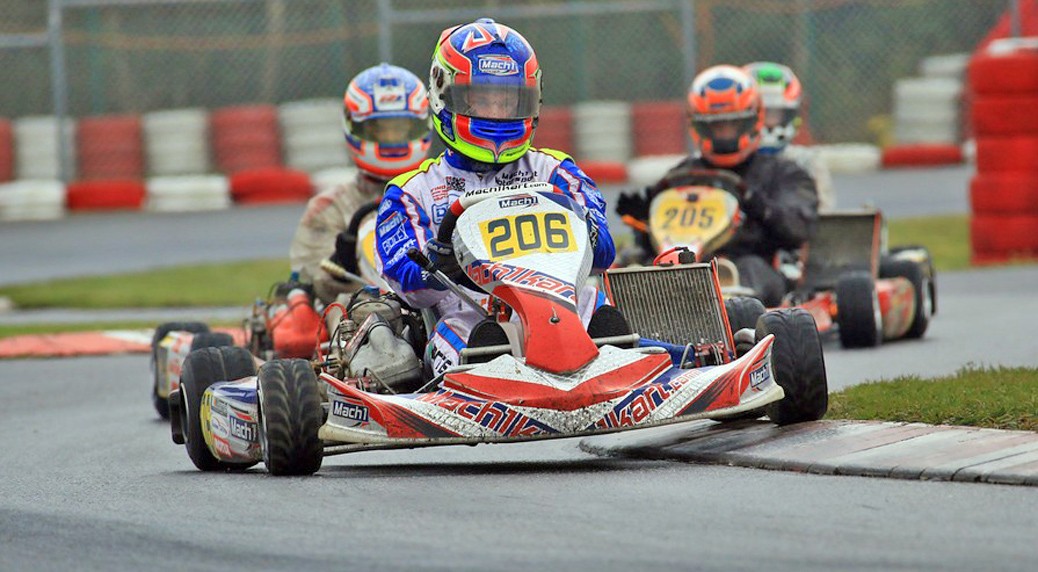 Last weekend, Mach1 Motorsport entered the final races of the German Shifterkart Championship with all five drivers. The kick-off to the highest German kart racing grade series took place at the Prokart Raceland Wackersdorf. The field was strongly manned with 51 drivers. John Norris drove among the top five.

The season kick-off to the German Kart Championship wasn’t easy. Unsettled weather caused the drivers and teams to worry. German chassis manufacturer Mach1 did well though and drove in the front with all of their drivers. The new FIA5-chassis proved its worth – the team was among the fastest teams despite different grip conditions.

One of the favorites was John Norris: The Irishman experienced a mixed qualifying due to the weather though and only ended up on 13th place. He skillfully fought his way forward during the heats though and improved his position to seventh place. John kept close to the leading drivers during the first race on the wet track and came in seventh again. He jumped to the front during the second final race then. After 21 exciting laps he finished the race close to the leading drivers on fifth place. That’s also his place on the temporary list of rankings. Team leader Martin Hetschel was content: “John was among the top drivers in all races. The new chassis was challenged multiple times due to the unsettled weather in Wackersdorf. It did a great job under all conditions.”

In addition to Norris, his team mates Marcel Schultheiß, Marco Forrer and Thiery Delré also directly entered the finals. Only Thomas Neumann had to qualify via the repechage. Coming in sixth, the kart returnee achieved a final ticket too. During the final races, the quartet established itself among the strongly manned field. At the second finale, Delré, Schultheiß and Neumann ended up on the 19th, 21st and 22nd places. Marco Forrer had bad luck though. After a 25th place at the first race, he had to prematurely end the race this time. “I’m very proud of my drivers – all of them have made their ways to the final races. This isn’t always sure in such challenging weather and with such a strong competition. Thomas Neumann especially impressed me with his first kart race after a long break. He quickly got a feel of things and can certainly provide a surprise once he’s gained more driving experience”, Martin Hetschel summed up.

Mach1-Kart is going to start at their next race next weekend already. The kick-off to the ADAC Kart Masters is going to take place on the Hunsrückring/Hahn.