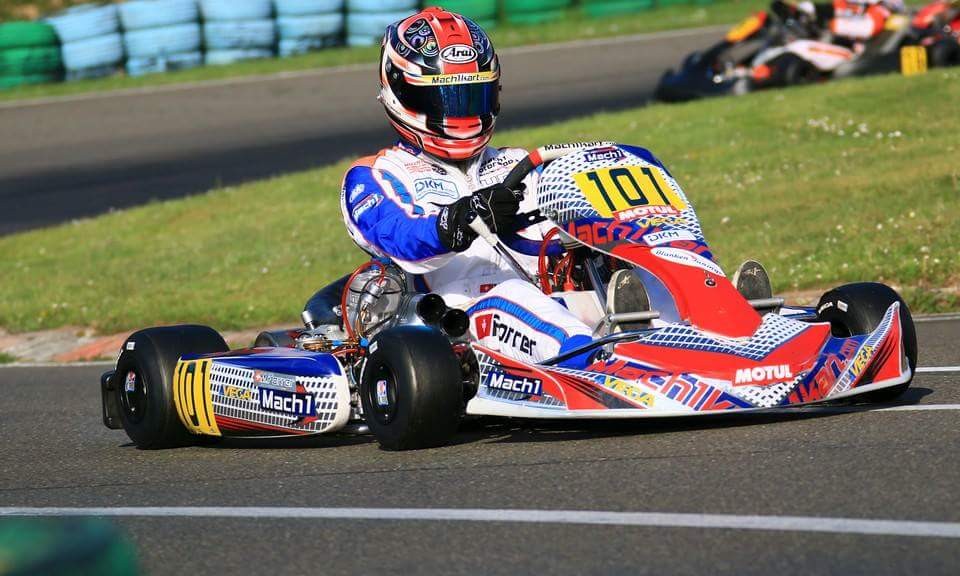 The ADAC Kart Masters started into its new season on the Hunsrückring/Hahn. Eight Mach1 kart drivers started there as well. The 2015 models of the German chassis manufacturer were able to impress from the bambini class to the shifterkarts and celebrated grand successes.

In great weather, the 195 participants of Germany’s strongest kart racing series started on the 1.377m long Hunsrückring. In addition to the Mach1 Motorsport team, the Mach1 factory supported teams DS Kartsport and BB Motorsport started with their drivers as well.

Marco Forrer and Toni Greif started for Mach1 Motorsport at the strongly contested shifterkart class. Counting 51 drivers, the field was completely filled up. Marco Forrer showed a solid performance and was able to improve his performance compared to the DSKM in Wackersdorf. After 22nd place at qualifying, he continuously got better and finished both heats on 11th place. From 14th starting position he drove forward during the first final race to 9th place. His great upwards trend was then unfortunately stopped during the second final race – Marco had to forfeit the race after a collision during the first lap. “The new Mach1 FIA5 Kart feels really good and is even easier to drive than the previous model. This is especially recognizable during the races. It’s a pity that I had to quit the second final race due to the accident. During the first race I drove the same times as the driver on third place”, the Swiss summed up in the evening.

His team mate Toni Greif was the best Mach1 driver after qualifying, on 18th place. He wasn’t content with this though – “The tire air pressure and the transmission weren’t right”, Toni commented on his result. He then got on well during the heats and finished these on 12th and 5th places. Unfortunately the disillusionment came after the second heat: Due to his overtaking someone during a yellow phase he was excluded from the ranking and missed entering the final races. “This is obviously very disappointing because the speed was right. During the first two laps things were really confusing due to all the accidents though and I must have missed the yellow flag”, he explained disappointedly.

DS-Kartsport protégé Alexander Heil started at the shifterkarts as well. The 2013 X30 senior champion is new to the gear class and achieved a good start by coming in 23rd during qualifying. He was able to improve his performance during the heats then and finished the first one on 10th place. A collision threw him back during the second but he was still able to enter the final races by coming in 24th. He was able to drive forward to 20th place during these and finished the second final race among the top ten, on the great ninth place.

In addition to Alexander Heil, Mark Wolf (X30 senior), Miroslaw Kravchenko and Luca Voncken (both bambini) started for DS-Kartsport as well. X30 senior Marc Wolf couldn’t achieve an optimal start in Hahn. He ended up on 18th place at the first final race and was then pushed off the track by an opponent during the second race and had to forfeit. Both bambini drivers showed strong performances though. Reigning vice champion Miroslaw Kravchenko belongs to the title favorites and showed a solid performance during the heats already. He entered the final races on fourth place and finished them on 3rd and 5th places. In the championship he is now on third place after the kick-off weekend. His team mate celebrated his ADAC Kart Masters premiere in Hahn and established himself in midfield immediately. With two top ten results he directly ended up among the cup ranks and is currently on ninth place on the overall list of rankings.

Baldur Bahn started into the 2015 season with a considerable training backlog. He felt comfortable in the new Mach1 FIA5 kart immediately though. Unfortunately a couple of quarrels and problems with the carburetor and engine cost him a countable result. The newly appointed team leader and driver in personal union doesn’t have time to bury his head in the sand though: He is going to start at the SAKC kick-off in Ampfing this weekend already.

Last but not least, Justin Tabakovic started at the shifterkarts. He continuously got better during his premiere race at the ADAC Kart Masters, but a 21st place and a falling out during the heats weren’t enough to enter the final races.

“I really want to praise all Mach1 drivers; they really did a great job this weekend. Additionally I have gotten lots of positive feedback regarding our new FIA5 chassis. I think we really did well with this”, Mach1 owner Martin Hetschel said in the evening, not without pride. To enable an even bigger audience to try the new material, Mach1 is planning some more test days in July, in cooperation with Mach1 factory supported team DS-Kartsport. We are going to publish details promptly.