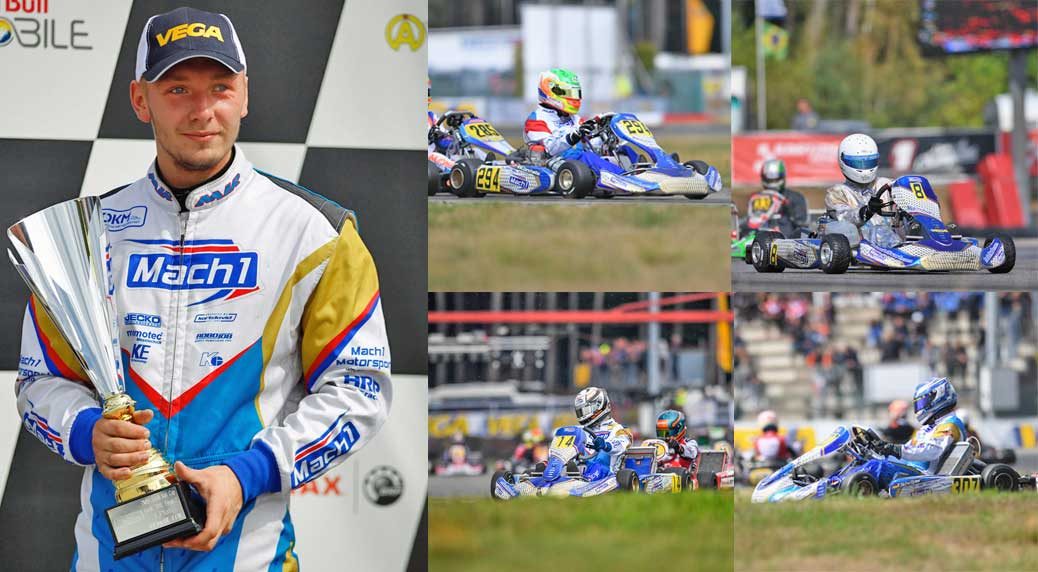 This past weekend the final of the German kart championship was held in the Belgian Genk. Mach1 Motorsport started with five drivers and belongs once again to one of the . Sunday night, the only German kart manufacturer was happy about Pawel Myszkier coming in fourth place in the DMSB shifter kart cup.

After lastly big success in the IAME X30 Euro Series and the Polish X30 championship, Mach 1 was back at the German kart championship.184 participants from over 20 nations started in the final in the Belgian Genk. Two weeks before the kart world championship in the same place, the categories were staffed top-class.

The Italian top-pilot Macro Zanchetta was a new addition to the team. He used the races in the German shifter kart championship to prepare for the world championship and made his debut in the first heat coming in second place. The following races did not run as smoothly so that he started the second final from the end of the field. Within the 19 laps, he fought his way up through the top-class field and saw the checkered flag as 13th driver. “Marco integrated very well into our team and it is fun to work with him. His experience is major and it helps us as well to develop further”, team boss Martin Hetschel praised his new member.

Pawel Myszkier belongs to the top drivers in the SMSB shifter kart cup and fulfilled his role also in Genk. Disregarding his deficit in the second heat, he was always placed under the top five and finished both finals in fourth place. He was rated the same place in the overall rankings. His team colleague Tim Schröder showed his great development and became even faster throughout both days. In the end he landed 16th in the point rankings.

Also, the German kart championship had an outstanding occupancy in the finals. Liwinski and Tim Tröger accepted the challenge and experienced tough qualifyings. Coming in 25th and 26th, the duo did not meet their expectations. In the course of the heats, fought his way to the front and qualified as tenth driver for the finals. seventh place he came up with better but had to record a failure in the second heat. His team colleague Tim Tröger had a difficult time on Saturday finding the perfect rhythm but drove from rank 18 onto eight .

Concluding, team boss Martin Hetschel was pleased with the presentation of his team: “We highlighted our speed in every class. With a little more luck we would have made it into the top five. Also great praise to our Supported Team DS Kartsport who came in fifth rank in the German shifter kart championship.”

The team will continue in a few days with the final of the ADAC Kart Masters in Prokart Raceland Wackersdorf.