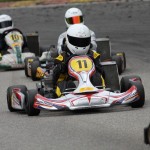 After the third race weekend of the ADAC Kart Masters in Ampfing Mach1 Kart Pilot Luca Walter leads furthermore the championship in the class IAME X30 junior. The other four pilots had a weekend with ups and downs.

After his success in Liedolsheim, Luca Walter was also very fast in Ampfing (Bavarian). In the first race of the IAME X30 junior class the drivers had very difficult track conditions. Luca showed a great performance and scored his second win. In the second round he was again quickly and finished on the second place. With these great results Luca got important points and lead the championship. Mach1 Motorsport team boss Martin Hetschel was happy with this success. “Luca drove two great races and showed that you can win with a Mach1 Kart on dry and wet conditions.” 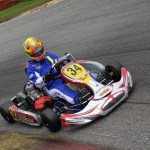 Bad luck had the other drivers in KF3 and KF2. The KF3 driver Mario Abbate had a great season start in Oschersleben and Liedolsheim. But in Ampfing he retired in one heat and lost the qualification for the final races. The two KF2 pilots Lucas Speck and John Norris had a disappointed weekend too. The guys were very fast in the qualifying but had misfortune in den races. Speck was in his first heat sixth, but had an engine failure in the second run and was at the end only 20th. 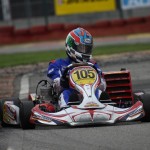 Team made John Norris from Ireland had electronics problems on Saturday and managed the qualification as 32nd after the heats. In the final races on Sunday, Norris had a great comeback and overtook more than 20 drivers. But in the finish he got a penalty and dropped down to place 19. In the second race he had a crash in the midfield and retired early. Lucas Speck had a similar situation. After a failure in race one, he drove very fast times in round two and stepped up to rank 20.

With Loris Prattes the team collected first experience in the Bambini class. At Sunday midday he arrived the finish line in each race and was placed in the midfield.

“This weekend, we can not be satisfied. Our drivers were very fast but had many problems and couldn’t show their full performance.” Martin Hetschel frustrated. 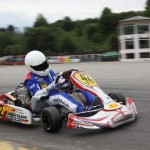 The next race for the German chassis manufacture is the start of the CIK-FIA U18 World Championship in Ortona (Italy). Mach1 Motorsport starts there with four drivers.