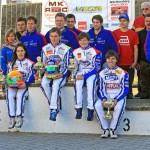 Mach1 Motorsport can look back on an extremely successful racing weekend. At the opening of the season of the Rhein Main Kart Cup, the team stood on the winners’ podium in a total of three classes and presented a great performance of their drivers.

In KF2, factory driver John Norris arranged for international glamour. The Irishman was the fastest driver on the track throughout the entire weekend and won a clear stage victory. “We were aware of the fact that John does not have a lot of competition this time. Nonetheless, he wanted to pay tribute to the clubsport through his commitment as well as advice and actively support his teammates in the lower classes,” explained team leader Martin Hetschel. In addition to Norris, newcomer Lisa Christin Brunner participated in a Mach1 Kart for the first time and did really well right away. After two very mixed starts she managed to fight her way to the front again respectively and finally came in on second position right behind her teammate.

Three IAME X30 juniors used the race as a training unit for the ADAC Kart Masters opening in two weeks. Everything did not go according to plan though. Sebastian Schwendt had to deal with carburetor problems and was therefore not able to tie in with his great performance at the Oscherslebener Winter Cup. The team managed to get a grip on the problem for the finals though and Sebastian closed the gap on the top group. Due to the fastest lap of the race, he came in third in the day’s ranking. The second driver, Axel Ausländer, achieved starting position six during qualifying and managed to defend this position during the first race. He was not so lucky in the finals though: during a skirmish he lost his frontal covering and with it his chances of a good overall result. Phillipp Heim on the other hand trod new ground and showed a remarkable performance during his first X30 junior race. After a breakdown in the first heat, he demonstrated strong nerves during the second and came in sixth.

Johannes Gumbrecht also celebrated a debut. In Liedolsheim, the youngster participated in his first KF3 race and continuously increased his performance throughout the course of the weekend. In the end he managed to stand on the winners’ podium on the third position.

On Sunday evening Martin Hetschel gave a positive summary of the weekend: “All in all, we are very content. We didn’t have any problems with the new chassis and managed to satisfy even with increasing grip. Additionally, we’re receiving a lot of positive feedback from outsiders regarding our new Mach1 FIA9 kart and the modified design, which of course prods us to become even better.”

Many pictures coud be found on our Facebook pages.

The team’s next race will be at the ADAC Kart Masters opening on April 14th and 15th at the Motorsport Arena Oschersleben.