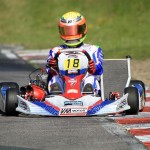 Even though it was only supposed to be a testing weekend, the drivers of the Mach1 Motorsport team showed top performances at the second event of the DMV Kart Championship in Wackersdorf and fought for victories in the classes KF3, KF2 and KZ2. On Sunday evening they achieved as many as six places on the podium.

Under bright sunshine and with high grip rates, Mach1 Kart drivers John Norris, Lisa-Christin Brunner (both KF2), Cedric Piro (KF3) and Toni Greif (KZ2) started the races on the 1.222m track. Their goal was to gather more test kilometers for the upcoming German and European Championships. Thus they participated in four races, two of the DMV Championship, two that would be ranked to the Bavarian Open, which were carried out under the rules of the European Championship.

Fastest man of the KF2 Open qualifying was John Norris. The Irishman had high ambitions of victory and led the field in the second run, after coming in 3rd in the first run, for quite some time. In the end, a problem with the ignition kept him from the triumph he had hoped for though. He managed to achieve this triumph in the DMV ranking then. Having started into the first race as third driver, there was no holding him back and he won the race. A problem with the outlet valve prevented the double triumph though and he came in 2nd in the second race. He was highly content nonetheless: “Our chassis has worked perfectly with this high grip and mixed rubber. We are very well prepared for the upcoming races.”

Lisa-Christin Brunner started in the KF2 class as well. The junior driver has been putting her trust into the German product since the beginning of the year and is constantly increasing her performance. She managed to confirm this trend during these races once again. Seriously shaken due to a malfunction right at the beginning, she came back into the race highly motivated and finished the KF2 Open finale as the great second winner.

Newcomer Cedric Piro is constantly increasing his performance in his new Chassis after his premiere at the ADAC Kart Masters and finished his qualifying sessions on first and third positions respectively. The first few races were full of quarrels though, which cost him important places. He then did everything right during the finale and came in a great third twice.

Toni Greif had to deal with the most difficult task. With 32 and 34 participants respectively, both shifter kart classes were strongly and internationally manned and he had to hold his ground. Greif was able to cope with this task brilliantly. Having started into the first DMV race on third position, he finished on 5th place. During the finale he managed to put his opponents under pressure repeatedly and just barely missed the victory, coming in 2nd.

The situation in the Bavarian Open was a little more difficult. In addition to strong international competition, Toni had very few experiences with the Vega tires used in these races. He managed to continuously increase his performance though and was able to highlight his possibilities due to an eighth place during a Heat and the overall 13th position in the finals.

Team leader Martin Hetschel also acknowledged his drivers’ performances positively: “All four of them have shown really great performances. The Chassis has worked very well under the circumstances and we’re now making it all the way to the top in the shifter kart classes as well. I’d like everything to continue this way at the DKM next week.”