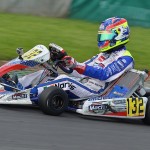 The CIK-FIA Kart European Championship final at British Brandon was a difficult one for the Mach1 Motorsport team. The German manufacturer’s chassis was once again able to satisfy on changing grip-conditions, but in the end various impassabilities caused them to miss entering the finals.

After a successful opening of the European Championship at German Wackersdorf, John Norris shot for a top ten position on the challenging PF International Circuit inBrandonalso. The mood was very good after free trainings. John quickly got comfortable on the track and his lap times promised a successful run throughout the three racing days. The disillusionment followed during qualifying though. Due to heavy rain and difficult track-conditions, the Irishman was not able to drive a fast lap and was only ranked an unsatisfying 53rd. Thus he had to start all of the five Heats from the conceivably bad ninth starting row. Despite heavy fights and collisions in midfield, John was able to set emphases by coming in 4th, 10th and 12th. Unfortunately, in the end two fallings out due to a collision and an engine defect earned him too many penalty points. The Mach1 driver was ranked 45th on Saturday evening and thus missed entering the finals. The team’s disappointment was understandably high: “John did not give up and was able to motivate himself anew for every race. Unfortunately it is very difficult to pull through a race without any accidents when starting from the back of the field. We will now try to end the weekend with a positive result in the B-finals,” explained team leader Martin Hetschel on Saturday evening.

On Sunday, the first disappointment had passed and John started into the B-finals highly motivated once again. From 11th position he fought his way forward and just barely missed placing on the podium by coming in 4th. “It’s been an enjoyable ending for us. Our chassis has worked perfectly on wet conditions, high grip and sunshine,” rejoiced Hetschel.

Next to John Norris, Lucas Speck and Lisa-Christin Brunner started for the manufacturer from Brackenheim as well. But for Speck, the weekend was over before it had even really begun. The young Rhinelander was still dealing with a previous arm injury and decided not to participate in any more races after the first Heat. His team mate Lisa-Christin was not entirely fit as well. Even though she managed to constantly increase her performance throughout the weekend, an old rib injury got to her again and she passed on participating in the B-finals because of health reasons.

Martin Hetschel tried to build up his drivers afterwards: “No one can take away their experiences of driving on this great and challenging track now. We unfortunately cannot influence health. It’s been better for both of them to drop out when they did so they wouldn’t suffer further troubles.”

After the past stressful weeks the team will now take a short summer-break. The next race will take place from August 17th – 19th on the Hunsrückring/Hahn, where the DKM will be coming to stay for the fourth race of the season.