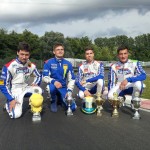 It’s been an exciting racing weekend for Mach1 Motorsport at the fourth event of the ADAC Kart Masters in Liedolsheim. The drivers were especially motivated on the home track of the German Chassis manufacturer and Cedric Piro achieved his first KF3 victory while Lucas Speck is still favored to win the Championship title in KF2.

The team from Brackenheim had not gotten a long sit-down. Having come home fromBraga(Portugal), which is 2.000km away, on Tuesday, the next race took place only three days later. At the ADAC Kart Masters in Liedolsheim as many as eleven drivers started for the team.

The most successful driver was Cedric Piro in KF3. The youngster fromSaarlandfelt immediately comfortable on the track and secured the great fifth starting position during qualifying. During the Heats, he managed to stay out of all quarrels on the narrow and angular track and thus started into the first final race from the third starting row. This started moderately, because Cedric was pushed into off during a narrow bend-combination and fell back to the end of the field. During the remaining laps he gave it his all once again and satisfyingly came in 11th. During the second final he then managed to jump to the top. Due to a great catching up race he managed to overtake his strong competition and had every reason to rejoice in the evening: “Everything’s great! My kart worked perfectly and I was able to fully attack up until the last bend and was therefore able to achieve this victory.” In the overall list of rankings Cedric has now climbed to fourth rank and even has chances to achieve third place during the finals.

In KF2, Lucas Speck started as overall leader and proved his wits. He had the right speed to drive in the front field throughout the entire weekend, but he did not risk too much and came in 5th and 6th respectively. He therefore extended his position and can now look contently on a comforting cushion of 27 points prior to the season finals at the Prokart Raceland Wackersdorf. Teammate Manuel Valier fromMunichwas capable of winning as well. After having some bad luck in Kerpen recently, everything went smoothly in Liedolsheim and he fought his way to the great 8th and 4th positions during the ranked races. Manuel thereby achieved a great leap forward in the overall list of rankings and is now ranking fifth, with chances of achieving third place. Lisa-Christin Brunner finally experienced a racing weekend without any notable accidents. She ranked 22nd after the Heats and fought her way up to 18th place during the first final, thereby gaining championship points for the second time in a row. She then unfortunately had to end the second final prematurely.

At the shifter karts, Toni Greif continues to further the development of the Mach1 Kart and was eye to eye with the top drivers throughout the weekend. Toni showed a great performance in all races, on dry as well as wet tracks, and was rewarded with the third and fourth places respectively in the evening. In the list of rankings he is now on fourth position, only five points behind second place. “The work of the last couple of weeks is now paying off. We’re constantly increasing our performance and will hopefully be fighting for the final victory in Wackersdorf”, said Toni Greif contently and gleefully.

Six drivers started at the IAME X30 juniors and the IAME X30. Fastest driver of the finals was Alexander Heil in the IAME X30. After a questionable decision of the race director during warm-up on Sunday morning he was put from 7th qualifying position to the back of the field. Due to coming in 10th and a remarkable third during the second final, the multiple WAKC-Champion nevertheless experienced his most successful racing weekend of the ADAC Kart Masters and managed to achieve third place in the Championship as well. His teammates Baldur Bahn and Lukas Korsch did not have to hide either, seeing as both of them fought their ways to the top ten during the second final in the afternoon and came in 8th and 9th respectively. In contrast, Jan Jesse had really bad luck, because two fallings out caused him a zero round. Similar events happened at the juniors. Sebastian Schwendt gained championship points during the first run, then had a falling out during the second though. Junior teammate Axel Ausländer crossed the finish line of both races, but didn’t reach the outcome he had hoped for, by coming in 23rd and 24th respectively.

Team leader Martin Hetschel was highly content after successes in as many as four classes in the evening: “It couldn’t have gone much better. We achieved the first KF3 victory and were able to show that we are competitive in more than just KF2. Lucas has driven a clever race and is still in the running for the title. Additionally Toni, Alexander and Cedric still have the chance to enter the top three of the Championship during the finals. That would be a fantastic overall result.”

By crossing the finish line, the European tour continues for Mach1 Motorsport. The team will start at the KF2 European Championship finals in English Brandon as soon as Wednesday.