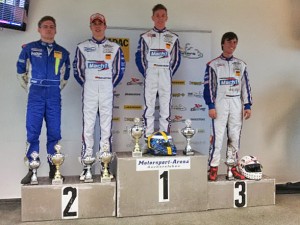 The second race of the ADAC Kart Masters couldn’t have gone much better for Mach1 Motorsport. In the Metropolis Motorsport Arena Oschersleben, the team stood on the winner’s podium as often as six times and is now holding a double lead in the X30 senior class.

A difficult task awaited the team last weekend at the Magdeburger Boerde. Heavy rain, wind and cool temperatures dominated the event and demanded a lot from the drivers, mechanics and team members.

The team from Brackenheim kept their chins up though. The drivers got in on the forefront of their respective classes during qualifying on the dry track already. Fastest driver was Julian Müller at the X30 seniors. The young driver from Cologne achieved a perfect starting position for the following Heats by ranking third. During the Heats, he continued his successful run and secured pole position for the first final on Sunday. Right next to him, his team mate Alexander Heil was able to take second position. Sebastian Schwendt showed a great catching up race: After ranking 30th during qualifying, he gave it his all during the Heats and was on the overall 9th position on Sunday morning. Baldur Bahn entered the finals as well, on 26th place. Jan Jesse and Tim Linden had less luck: they missed entering the finals by coming in 35th and 40th respectively.

The first race was dominated by a great fight in the front field. Julian Müller drove right at the front, behind him Alexander Heil and Sebastian Schwendt put up a fair fight. The duo changed their positions numerous times, Alexander Heil then prevailed at the finish line and stood on the winner’s podium on third place, Alexander Heil followed on fourth. Julian Müller was in his element during the second race as well. The driver from Cologne controlled the pace at the front and secured an impressive double victory in front of Alexander Heil. The duo is now setting the tone on the overall list of rankings as well. Alexander Heil is holding the first position in front of Müller. Sebastian Schwendt on the other hand had lots of bad luck: after his catching up races during the Heats and the first race, he had to deal with a falling out during the second. Baldur Bahn even missed finishing twice.

Manuel Valier entered the KF2 as a soloist and could always be found among the top five throughout the entire weekend. He finished qualifying on fourth place, both Heats on third place and was therefore able to start into the first final from second position. Things got heated during the race then. Like pearls on a string, four drivers fought for the victory and made for a heart-stopping finish. At the finish line, Manuel came in second. The second final went a lot more calmly. Manuel kept his second place from the beginning and was therefore able to collect important Championship points. On the overall list of rankings, he’s in close distance to the leading drivers, on fifth place.

Tim Schröder drove at the ADAC Kart Masters for Mach1-Kart for the first time. In the fully manned shifterkart class KZ2, he was on 18th place after the Heats. Unfortunately, he was involved in a collision during the first final and therefore had to do without starting at the second race.

Team leader Martin Hetschel was more than content after these successful racing days: “The weekend couldn’t have gone any better. We set the pace at the X30 seniors on the dry as well as wet track and are now leading the overall list of rankings. Manuel was also very successful at the KF2. Our Chassis has worked perfectly again and I’m looking forward to the upcoming races.”

Mach1 Motorsport will already be attending their next race with drivers John Norris (KF) and Nicolai Hagenaes (KFJ) next Wednesday. The WSK Euro Series’ final will be taking place in Belgian Genk.