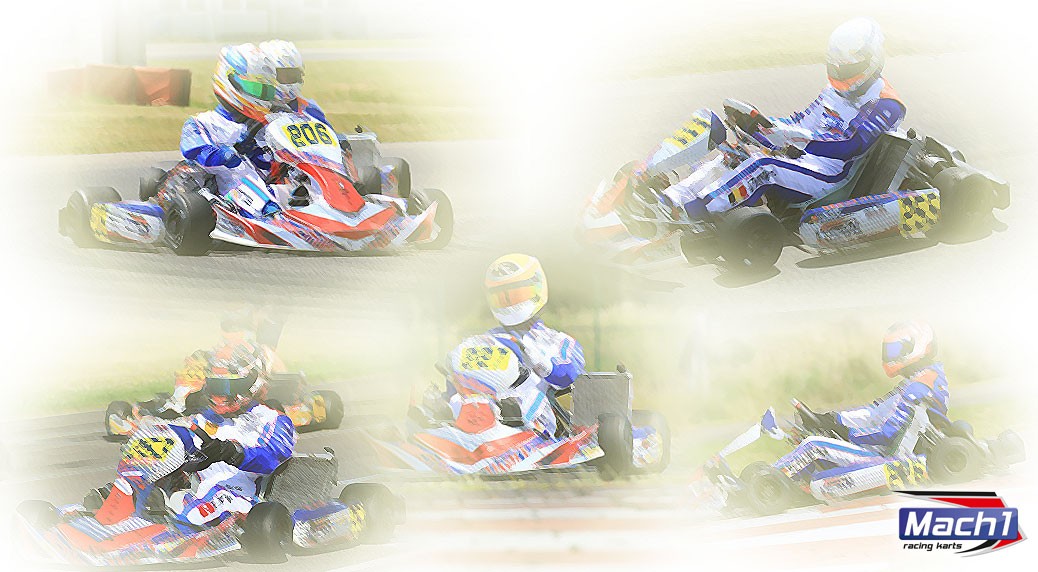 Mach1 Motorsport started at the second event of the German Kart Championship in Genk with five drivers. The protégés were up against strong competition in the shifterkart class and experienced a mixed weekend. Irishman John Norris was the best driver in the end.

The European Kart Championship was clearly not far away anymore. Numerous international top drivers used the race in Genk as preparation, which is why the field was well filled up with 62 drivers. John Norris was among the favorites after qualifying already and finished every heat in the top ten by coming in seventh, eighth and ninth. That put him on 12th starting position for the first final race. He had to deal with an early falling out during this race though. He then showed a great catching-up race during the second race and finished on the great 13th place. He is currently on ninth place on the overall list of rankings. “John was very well underway again. The performance was right and the chassis did a good job with these challenging conditions”, Martin Hetschel summed up in the evening.

The other four drivers Marcel Schultheiß, Thomas Neumann, Thierry Delre and Marco Forrer had less luck though. Despite strong individual performances during the heats, the quartet had to deal with several fallings out and all started at the repechage. During the race’s eleven laps they gave it their all to gain tickets to the final races. Belgian Thierry Delre was the most unlucky driver in the end: he just barely missed entering the finals by ending up on seventh place. “That was really unfortunate, the boys all did really well. After Wackersdorf, where all of them entered the finals, we had to deal with a setback here”, said Martin Hetschel.

Lucas Speck achieved a small sensation after qualifying. The driver of an LS kart, which is being developed in cooperation with Mach1 kart, achieved fourth place. During the heats he was able to prove that this result wasn’t a flash in the pan. Next to a falling out, he finished on eighth and eleventh places and entered the final races directly. Things didn’t go so smoothly during these though. His results were a falling out and a 26th place, which doesn’t reflect on the Hilden resident’s possibilities.

While all teams went home on Sunday evening, Mach1 Motorsport used Monday for additional tests on the 1.360km long track. The German chassis manufacturer is going to start at the finale of the European Kart Championship with four drivers. Two weeks prior, Mach1 kart and its factory supported teams are already going to start at the halftime-race of the ADAC Kart Masters in Oschersleben.