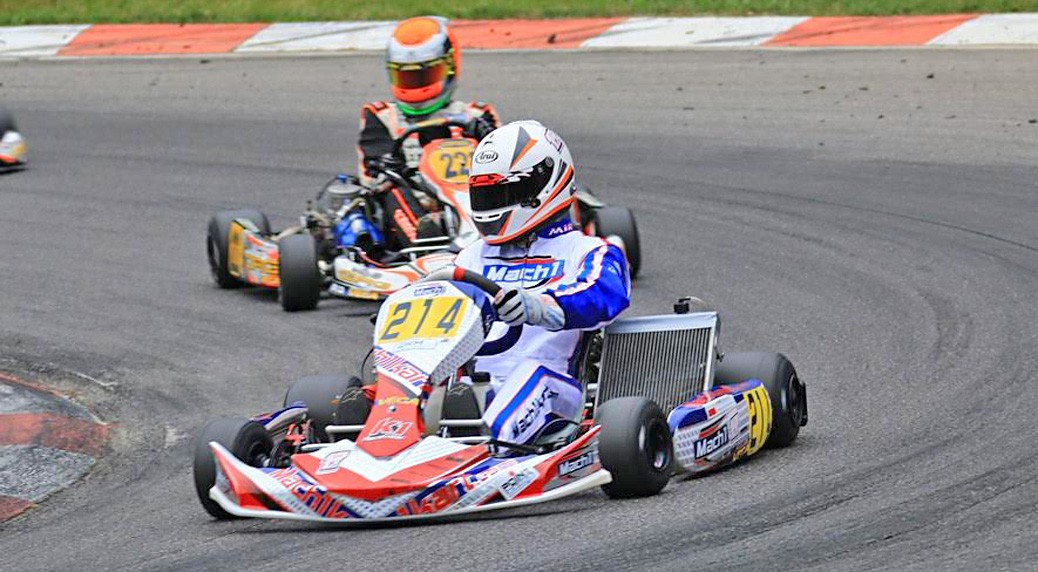 Another highlight awaited Mach1 Motorsport before their summer break. The ranked races five and six of the German Shifterkart Championship took place on the Schweppermannring in Ampfing. The German kart manufacturer Mach1’s team started with six drivers from four nations. While the sun was shining in huge parts of Germany, the weather in Ampfing was of a mixed nature. On Sunday morning the first final races took place in the rain.

During qualifying and the heats on Saturday the 1.060m long track was still dry though. Fastest driver of the team was Irish John Norris, who qualified for the finals by ending up on 15th place. He was then stopped due to a defective clutch during the first race though. From the back of the field he then fought his way forward during the second race and ended up on the good 17th place, which still gained him one championship point.

Pole Pawel Myskier celebrated a successful team debut. He achieved a direct ticket to the finals by ending up on 27th place, even though he had to deal with a falling out during one of the heats. On the wet track he then drove as if unleashed during the first race. Coming in 11th he just barely missed placing in the top ten. He was aiming for points during the second race as well but was stopped by an erratic axle in the end. He was able to limit the damages a little by coming in 21st. On the overall list of rankings he climbed from 16th to 13th place after his switch to Mach1 Kart.

Kart returnee Thomas Neumann was present in the ranked races as well. He achieved his qualification by coming in third at the repechage but unfortunately had to drop out of the first race prematurely. From the back of the field he drove in the wind shadow of his team mate John Norris during the second race and came in on the good 20th place.

Marcel Schultheiß and Marco Forrer weren’t able to qualify for the final races, both of them had to forfeit prematurely after the repechage. Even though his drivers’ yield was low in the end, Martin Hetschel still found positive words about the weekend in Ampfing: “Unfortunately this result doesn’t reflect our possibilities. Our material’s speed is right – Pawel and John could have ended up in the top ten. Little things prevented good results in the end though. We’ll now take our summer break and are going to prepare for the next races meticulously.”

The next races are going to take place from September 5th – 6th at the etropolis Motorsport Arena Oschersleben. Before that, Mach1 Kart is also going to start at the ADAC Kart Masters in Kerpen.